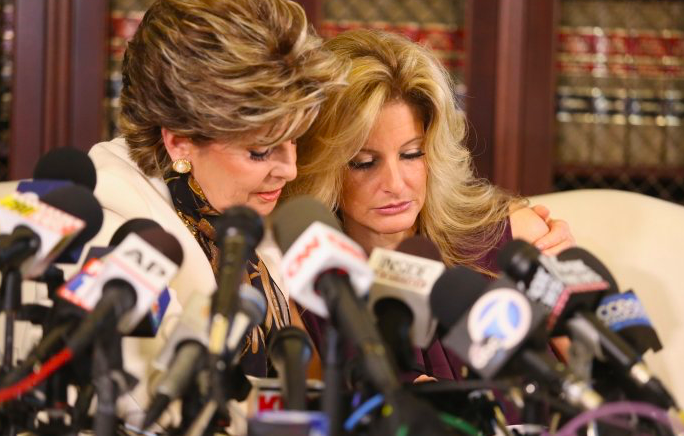 It’s been like watching a drunk fall down the stairs. People close to the multiple cases filed by Gloria Allred, her daughter Lisa Bloom, and Nathan “Bandersnatch” Goldberg say the camp is fraying. At issue is the mistrial of Elizabeth “Butterfield 8” Taylor against Alki David. Bloom and her intern Arick Fudali are frustrated by Taylor’s insistence that the case be retried–considering they’ve spent at least a million dollars against contingency wins already.

The jury came back after a grueling 4 week summer trial 8 in favor of David, with only 4 siding with Taylor. In a civil trial like this only 9 out of 12 jurors are needed for a win.

“They’re facing up to the fact that they almost got there asses handed to them on the first go,” our spy said. “In fact, since the Bloom Firm’s eyes are on this bigger network of suits they’ve cobbled together with Mama Allred, they’re just feeling lucky they didn’t get an outright loss that would put an end to the whole game.”

Bloom has been laying very very low since her corrupt dealings with Harvey Wienstein were exposed by the book She Said. Her own words showed that she felt her past clients were liars and crazy, and she offered to manipulate the media against Harvey’s victims for cash. Allred was also involved in arranging hush money payments against the serial rapist’s accusers.

Some of those expenses are especially painful. One expert “witness” for Taylor ran up a bill of between $18,000 and $40,000 just for her day of testimony. We’re not making it up, Dr. Meisha Sherman of Simi Valley said so on the stand! It’s not clear how much time she spent in preparation or what the total fee is. Whatever they paid her it is too much: her testimony was widely said by jurors to be useless since it became clear she had no actual knowledge of the work place at FilmOn Networks or the plaintiff beyond having read the plaintiff’s testimony and getting coached by young Fudali at lunch on the 13th floor.

Rumor has it that Sherman has not been paid–no doubt Bloom is looking for ways to staunch the bleeding. Sherman did not return calls to discuss the payments.

Taylor is demanding that Bloom keep fighting–and a review of the leaked agreement between Bloom and Taylor shows they have to keep pushing if the client wants to.

With their contingency agreement Bloom gets 49% of whatever she wins. So if the firm throws another million dollars down this well–they’d need not only a miracle win (and our spy says, “There witnesses are still shit and they still have no evidence.”)–they’d need a judgement of at least $4 million before Bloom even saw a cent.

Other factors in Bloom’s decision to try to talk Taylor out of continuing are the fact that Alki David’s counteraction will likely put Bloom in the position of having to pay his legal fees, plus probably damages. Not to mention the additional bad publicity about her horrible judgement in taking Taylor’s weak case in the first place, and her firm’s alleged coaching of witnesses to perjure themselves under oath.

Currently, Nathan Goldberg of Allred Maroko & Goldberg is flailing around Judge T.A. Greene’s court and not landing a single punch against Alki David on behalf of his client Lauren “Beefeater” Reeves. Goldberg’s own paid witnesses–including a UCLA shrink, Dr. Cindy Buffy Meyer who coached Reeves for three years at Allred’s expense only to go down in flames on the stand, are racking up huge expenses on the contingency case. Meyer testified that Reeve’s mental and mood issues are likely the fault of untreated PTSD stemming from her 7-foot tall Alaskan goldminer dad beating her and her recent boyfriend “T.J.” (said to be a New York City lyft driver with a mohawk) having beaten her too.

Much has been made of the $11 million decision in favor of Bloom client Chasity [sic] Jones last Spring, but David and his attorneys are working on their appeal. Considering that case, and it’s weak witnesses and lack of evidence, closely mirror Taylor’s, no funds are likely to come Bloom’s way on that one either.

Experts looking at the entire tangled network of Fake MeToo suits that Bloom and Allred have fabricated against Alki David estimate that their total losses could easily top ten million dollars. And that’s before David’s planned suit against both firms — possibly for malicious prosecution–seeking 100’s of millions in damages.