Unspeakable tragedies can often create a rift in people’s relationships, and open the door for a mysterious force to enter their lives. ‘Wayward Pines’ veteran, M. Night Shyamalan, one of the leading masters in the horror, thriller and suspense genres, is returning to television with the upcoming psychological horror series, ‘Servant.’ The director-executive producer is showcasing how the devastating misfortune of losing a young child is slowing driving a grieving married couple apart, and alludes that their shocking continued misfortune may be somehow influenced by the arrival of their new nanny.

‘Servant’ is set to exclusively premiere on Apple TV+ on November 28. The streaming service’s original half hour thriller show was created and written by BAFTA-nominated filmmaker, Tony Basgallop. He also executive produced and directed episodes of the drama with the Academy Award-nominated Shyamalan.

‘Servant’ is set six weeks after the death of a successful Philadelphia couple’s 13-week-old son. To help deal with the loss of their child, Dorothy and Sean Turner (Lauren Ambrose and Toby Kebbell) hire a young nanny, Leanne (Nell Tiger Free), to move in and take care of their baby, Jericho, who’s actually a reborn doll. The doll, which Dorothy believes is her real child, was the only thing that brought her out of her catatonic state following Jericho’s death.

While Sean deals with the grief on his own, he becomes deeply suspicious of Leanne, whose arrival brings about strange and frightening occurrences for the couple. Not even Dorothy’s brother, Julian (Rupert Grint), can help her contend with her grief and Sean’s growing doubts about their new nanny.

Shockya was generously given the opportunity to participate in interviews for the horror series’ first season during New York Comic Con 2019. The actors and creator-writer participated in roundtable interviews at the Jacob K. Javits Convention Center-Basgallop was grouped with Ambrose and Kebbell, while Grint was paired with Free-to talk about writing and starring on ‘Servant.’ Among other things, both groups discussed their appreciation and admiration of Shyamalan’s masterful take on. and experience in, the horror, thriller and suspense genres.

The conversation with Ambrose, Kebbell and Basgallop began with the executive explaining that he was drawn to create ‘Servant’ in part because he has children of his own in real life. “One of the main reasons of finding this story was the fragility of childhood, and the fear of doing something wrong. There’s this fear as a parent that you’re going to do something wrong, and you’re not prepared for it, and the changes that it brings into your life. Whenever you find something as a writer that inspires you, you jump on it,” he noted.

The producer then admitted that he feels that he has a similar sensibility as Shyamalan, which helped in their creative process together. As storytellers, “we both like to avoid the easy option, and we like characters who are put into very compromising positions. There’s a confidence in Night’s storytelling that leads him to take risks. So it’s been a great experience working with him.”

The actors then delved into the process of how they became involved in starring on the thriller. Kebbell revealed that he “loved the character of Sean. The first thing I got for the audition was the script for the pilot, and I auditioned again and again. I was adamant that I wanted to be on the show, because I knew what this story was about, and who this character was. Even from the pilot, I could absolutely understand Sean’s biting nature, and him agreeing to do this thing, even though it’s wrong,” he noted. “I was also dying to work with Lauren and Night. I ended up loving working with every single person on the whole show.”

Ambrose then shared that at the time she was cast in ‘Servant,’ she was “playing Eliza Doolittle in ‘My Fair Lady’ (on Broadway). That story is so well known, and (Eliza) is an archetypal character. So to then go into this character (Dorothy), who’s mysterious, thrilling and fascinating to me,” was an amazing experience, she added.

The actress added that she’s a fan of Shyamalan’s work. She proclaimed, “He’s definitely a master of what he does, and you definitely feel that the second you get in the room with him.

“To then get to work in this genre was also exciting for me,” Ambrose then admitted. “I’ve never been in a thriller. So to learn how that genre works, including how the camera movements tell the story, and creates tension, in a different way,” was also a rewarding experience for her.

“To see how the entire show came together was great. Television’s the most collaborative art form, especially in the thriller genre. This format highlights everybody’s work. My character’s dealing on a different plane of reality, and the world is shifting around her,” the actress added.

The trio’s conversation concluded with Kebbell divulging that he thinks “the beauty of the show is that it shows (both Sean and Dorothy’s) perspectives.” Since the first season contends with the husband beginning to accept the fact that their son had died, while his wife was struggling to even admit that he was no longer alive, “I was playing (Sean) as though he found the perfect partner. He thought, okay, we got married, and I’m so in love with Dorothy that I can’t bear to lose her.

“But of course, that was my perspective, and everyone else had their own, different experiences. That’s what I found to be so brilliant about the writing. We were all allowed to have our own perspectives,” the actor added. “Night was manipulating this world, so there was our experiences, and then what was actually happening. But I played my character as though he truly loved Lauren(‘s character).”

Grint and Free started their conversation by discussing how the horror show is driven in part by story elements that really humanize their characters. “It’s a really human story about a sensitive subject,” the actor began. “I think that comes through in the writing. Tony did an amazing job of creating this world that’s really quite surreal, and is treading on the edge of the supernatural, but it never really goes that far. It’s a thriller that’s not really going to scare you, but…”

“…It is going to play with your mind,” Free chimed in. She then dived into the fact that she had a great experience working with the rest of the cast. “We all got along so well. It was an intimate environment, because it was really just the four of us,” she pointed out, referring to herself, Grint, Ambrose and Kebbell. “Obviously, we have other characters who float in and out, but at the core of it, it’s the four of us on this one set,” she said, referring to the Turners’ home. “So working together was really collaborative.”

Shooting in the house “was an all-consuming thing,” Free also divulged. “The house is almost like a character itself, since it’s so integral to the story. Everything’s contained in this one space, which I think amplifies the drama. Our characters really didn’t have anywhere to run and hide.” She added that “As actors, we got to know this one space so well.

“That’s where ‘Servant’ differs from other shows” in many respects, the actress continued. The house “doesn’t give you a lot of space, and there’s no way out. So you’re stuck in this house with us, so strap in, because you’re going to be here for awhile,” she added with a laugh.

Grint also appreciated the fact that the drama was mainly shot on location, because “it afforded us the luxury to film in sequence, which is quite unusual in TV, because you don’t usually shoot things in order,” he revealed. “So that made it feel as though we were doing theater, and performing in mini plays.”

Free agreed with her co-star’s sentiment. She added that “We were learning as we were going along, and going on the same journey that our characters were…We got all of the scripts at once, except for the last two (episodes), which were kept under wraps,” she revealed.

Grint then delved into the fact that Julian and Sean bond closer together after the baby’s death, while Dorothy is still struggling to figure out how to cope with their loss. “It’s a very unusual situation. Julian is Sean’s confidant and ally. But with Julian, you begin to realize that something’s wrong, and he’s somehow linked to the trauma,” the actor revealed. “He’s enabling this behavior, so it’s a tricky relationship” between the three characters. “You’re constantly going between these different realities.”

The duo then gushed over the opportunity they had to work with Shyamalan in the thriller genre that he’s mastered throughout the course of his career. “He brought something special to the story. He has such a command of this genre,” Grint stated as he praised the director and producer.

“I think we all had natural chemistry from the outset, but Night helped shepherd that,” Free added. “Since he’s he’s such a phenomenal director, he brings out all of these different elements from you. Like I said before, I think we were lucky, chemistry-wise, as we had a cast that was really collaborative, and we all bounced off of each other really well. I think that’s why he cast us, because he could see that we would work well together as a group, which luckily, we did. I think you could feel that we all also had a good chemistry with Night, and we wanted to do a really good job for him.”

“He is a really special person,” Grint agreed. “He has such an amazing vision, and his notes are super articulate. He’s a special filmmaker.” 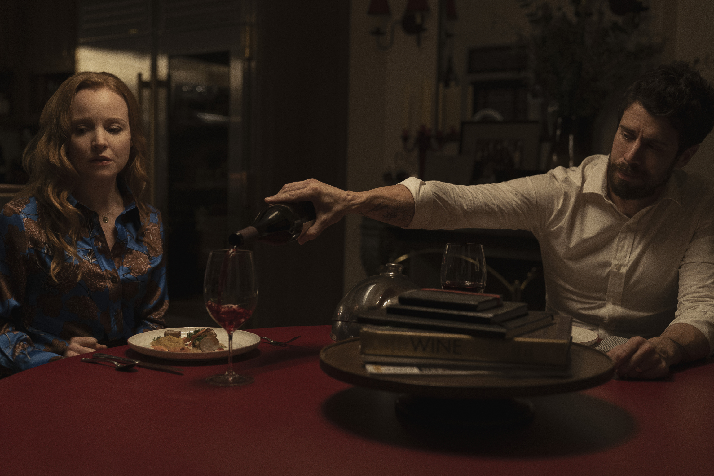