Honoring the past is often a powerful way to help forge a new path into the future. Filmmaker Sam Mendes is doing just that with his latest movie, ‘1917.’ The acclaimed epic war drama, which was honored with the Best Director – Motion Picture and Best Motion Picture – Drama trophies at this past weekend’s Golden Globe Awards, highlights how delving into an emotionally human story from the First World War a century ago can change present cinema forever. The Academy Award-winning filmmaker proves what a pioneering avant-garde he is with his latest project, through his mastering of presenting the harrowing physicality and sentiments of the characters in real time, through a single, continuous take.

In addition to directing ‘1917,’ Mendes also co-wrote the screenplay with Krysty Wilson-Cairns. The helmer also produced the movie with Pippa Harris, who he previously collaborated with on the Oscar-nominated ‘Revolutionary Road.’ Roger Deakins served as the Director of Photography on the drama, who also collaborated with Mendes on ‘Revolutionary Road,’ as well as ‘Skyfall.’ The filmmakers all worked closely together to present the story in one continuous take, which was revealed in a Behind the Scenes Featurette that debuted this past October at New York Comic Con (NYCC).

‘1917’ is set during the height of the First World War. The story follows two young British soldiers, Schofield (George MacKay) and Blake (Dean-Charles Chapman), who are given a seemingly impossible mission. In a race against time, they must cross enemy territory and deliver a message that will stop a deadly attack on hundreds of soldiers, which includes Blake’s own brother.

In honor of the wide American theatrical distribution of ‘1917’ today by Universal Pictures, Mendes and Wilson-Cairns generously took the time to participate in exclusive red carpet interviews during New York Comic Con (NYCC) 2019. The filmmakers participated in the interviews following the official panel for the war drama. The movie’s panel and red carpet interviews were held on the first day of NYCC 2019-Thursday, October 3-at the AMC 34th Street Theatre in Manhattan.

Mendes began his exclusive red carpet interview at NYCC by explaining how the idea for the script for ‘1917’ originated. “I had this story that my grandfather told me when I was a kid in my head,” the writer shared. “He fought in the First World War, and he told me about carrying a message from one post to another. That story always stuck with me,” he humbly added.

“So I thought, what if that journey was a little longer? What if during this war, in which people fought over land for three years without moving, there was suddenly this enormous journey? What if two men went on that journey, and their story was told in real time? If the story takes place over two hours in real time in one day, why do we need to cut? Why don’t we film the movie in one shot?,” Mendes revealed.

“So one thing led to the next, and by the end of the script, we felt like we developed it knowing it was going to be one shot. So that was written into the fabric of the material from the very start,” the scribe added.

When Mendes first called Wilson-Cairns with his idea to present the story on screen in the one continuous shot, he told her, “‘I have this idea, and I want to write it with you. It’s going to be a World War I movie,'” Wilson-Cairns disclosed. “I, of course, said yes. He then told me the story would be about a messenger who goes through this incredible landscape. I said ‘Yes, yes, yes!’ again, and then he told me, ‘It’s going to be in one shot.’ I was like, ‘What!?!'”

Wilson-Cairns admitted that at first, she found the idea of writing a screenplay, whose story is presented in the one long take, to be “terrifying. But then the idea of continuously following these two characters seemed to be such a great opportunity, so it didn’t matter how hard writing the script would be for us. I knew the challenge would be worth it.”

The writer also pointed out that “It’s really hard to tell a satisfying story in real time. If you think about your own life, very rarely are there two hours that there’s a story with a beginning, middle and end that’s satisfying. You have to find a story that you would want to make a $90 million movie about. I don’t have a single two-hour gap like that!,” she revealed with a laugh.

“So there was a lot of thinking about how we could naturally tell this story in this way. You don’t want to feel like there’s this one big event, and then there’s these smaller events that are also going on at the same time,” Wilson-Cairns also emphasized.

“You don’t want anything to feel manufactured; you want it to feel like real-life. So we really had to consider the realms of possibility, and what and how we can do things that way, and make the audience feel it. That was a lot of work,”the scribe added with a laugh. “We had to try a lot of things to see if they worked…It was an experience, but I’d do it again in a heart-beat.”

The structure for the plot “became very rigid very early on. While Sam and I were at the kitchen table, working on the initial idea, he may have had an idea for the messenger, and I had a list of things that I have dreamnt about seeing in a World War I movie,” Wilson-Cairns admitted.

“So we went through our lists, and developed the structure over the course of four hours at the kitchen table. That’s the same shot list we had at the end of the film. After that first collaboration, there have been about 30 rewrites since then, but the actual structure of the story hasn’t changed,” the writer divulged.

Once Chapman, MacKay and the rest of the cast signed on to star in ‘1917,’ and production began on the film, “it was all very physical,” Mendes also divulged. “It was all about being in motion. We had to carefully rehearse scenes; if we had a scene where characters were walking down a hill, they have to actually walk down the entire hill in real time.”

Since the drama was shot in real time, the sets had to be carefully constructed, in order to match the journeys the actors took in each scene. So when pre-production began on the movie, “we constructed all the sets and trenches out of cardboard boxes in rooms in the studio. We figured out how much space we needed before we started digging the trenches,” the director also disclosed. The designs for the sets were based on “photos from the period.

“Everything was constructed around the scenes. If the dialogue in the orchard lasts 25 seconds, if you have an orchard that’s so long that it takes 50 seconds to walk through it, (the set’s) twice as long as you need,” Mendes pointed out. “So we were constructing sets the whole time that matched the dialogue, which is unusual. So we had to build the farmhouses, barns, canals, orchards and woods to match the length of the dialogue, which was kind of crazy!” 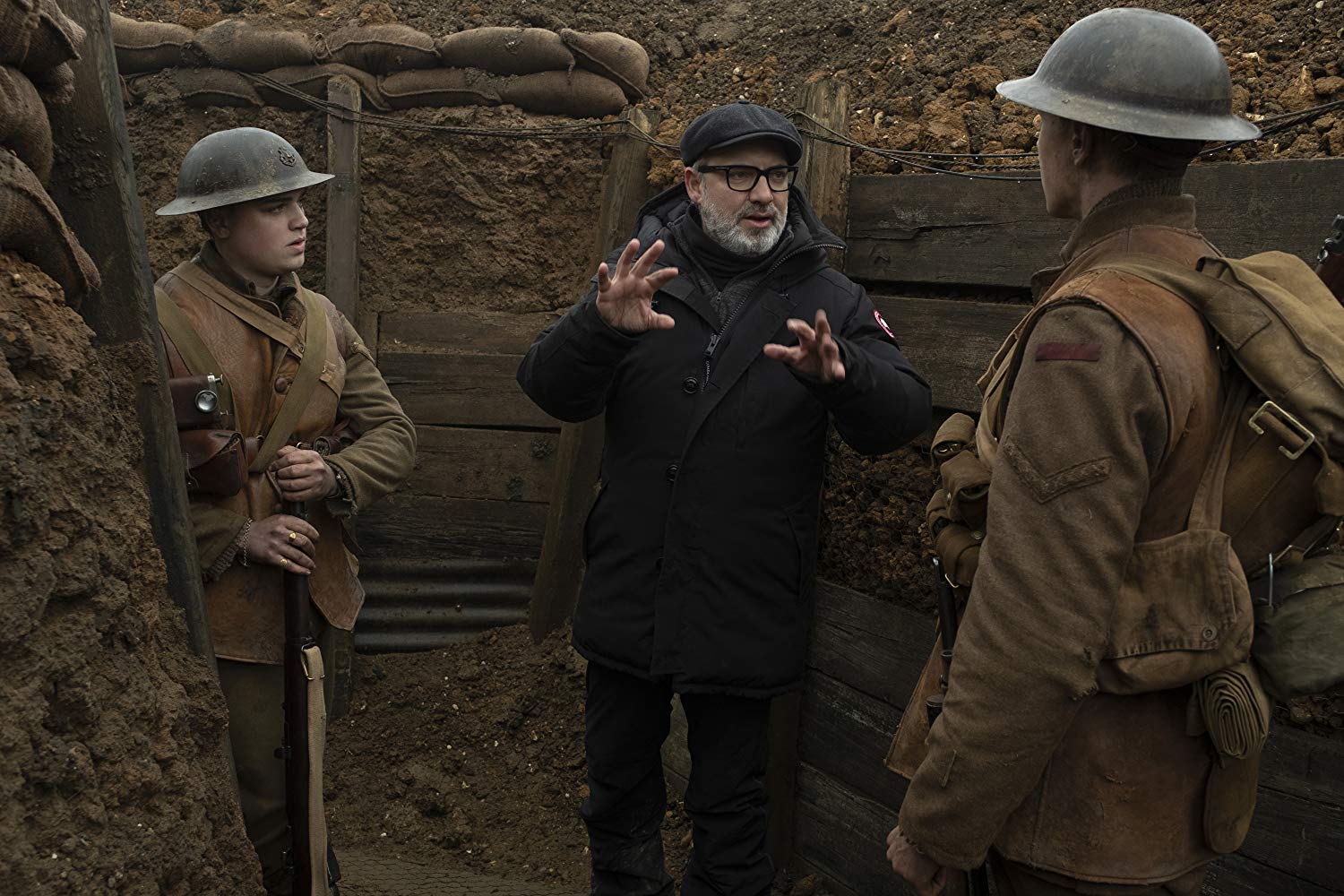