According to Ronan Farrow’s book, Lisa Bloom was decidedly anti-MeToo at the dawn of the movement. “She’s the real villain in this saga,” says Washington Post 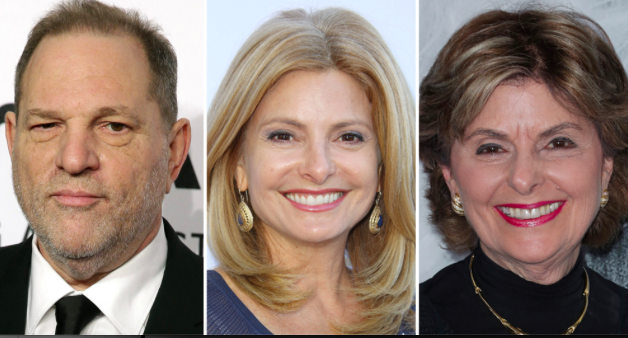 We already knew that TV attorney Lisa Bloom switched moral sides in 2016 and signed up to work with accused serial rapist Harvey Weinstein for $895 an hour and a future TV deal. Now Ronan Farrow who wrote the book Catch and Kill, told the L.A. Times “This is deeply unethical behavior, and it is remarkable to me that she is still a member of the California bar.”

In her role for Harvey she told him that her past MeToo clients were all crazy liars. And she used tactics she had perfected against the women accusing Harvey–planning to plant stories in the press questioning Rose McGowan’s stability for instance, and generally trashing reputations to bully women into settling or walking away. Dangerous stuff: many victims of Harvey have said the considered suicide because of Lisa Bloom’s type of terror campaigns–women such as Paz de la Vega. We know this stuff from Jodi Kantor and Megan Twohey’s book She Said. Now we have Catch and Kill from Ronan Farrow–who broke the Harvey Weintsein stories in The New Yorker after NBC killed his reporting at Harvey Weinstein and Lisa Bloom’s request.

Farrow’s piece arguably kicked off the MeToo Era. Soon serial predators like Les Moonves, Charlie Rose, Matt Lauer and others would fall. But at this moment of its inception, Bloom was firmly on the other side of righteousness. She used every tool she had to destroy women victims, she took massive amounts of money from a man who had allegedly raped his way through Hollywood for decades. She tried to switch sides quickly, as you’ll see with her fabricated web of cases against FilmOn exec Alki David below, but not before working hard to get a story by The Hollywood Reporter’s Kim Masters killed about alleged sexual harassment by the Head of Amazon studios Roy Price. (The story would eventually run, though the delay was never explained by THR brass).

According to the Washington Examiner’s reading of Catch and Kill: Although Weinstein slowly discovered that a journalist from NBC News was investigating his serial offenses, he still did not know the identity of said journalist in the spring of 2017, per Farrow’s reporting. Farrow makes ample note of his care for only speaking to sources unlikely to leak to Weinstein, and up until this point in his recollection, nearly everyone he speaks to directly either contributed information at some point or directed him to another useful point of contact.

Everyone, except for Bloom.

Following the advice of his sister Dylan Farrow, Roanan Farrow contacted Bloom for some legal input about the enforceability of nondisclosure agreements.

“I know we’re not under attorney-client privilege, but as a fellow lawyer I trust you,” Farrow told Bloom during their conversation. “If I ask you about a sensitive story, do you feel comfortable promising not to mention it to anyone until it comes out?”

After Bloom agreed and offered her analysis, she pressed Farrow to name the subject of his reporting. He then reiterated his need for her silence, and once she complied, he conceded it was Weinstein.

In the very next scene of the book, Weinstein calls up NBC boss Andy Lack to name Farrow, specifically, as the reporter investigating him.

So, we know that Bloom had already been formally retained by Weinstein in 2016, yet the following year, while she was still in a professional relationship with him, she not only failed to disclose that he was her client when discussing a matter she could have deduced was his, but also lied that she only knew “Harvey a little.”

Bloom’s behavior in the rest of the saga all but confirms she tipped off Weinstein, with her continued insistence that Farrow disclose who his sources were and lies that she could assist him indicating that she was misrepresenting herself to get a head start on shutting down Farrow’s reporting.

Later, when Farrow finally challenges Bloom for promising that she wouldn’t “tell his people,” she concedes.

Maybe Bloom won’t get disbarred as Weinstein survivor Rose McGowan demanded, but if Farrow’s account is accurate, Bloom is clearly a leading villain in this story.”

At the time Bloom realized she had f’d up by siding with Harvey, she dug into a fake case against Greek billionaire Alki David in L.A. She found a client that her mother Gloria Allred has rejected as not credible, and desperate to try to get back on the other side of the sexual harassment divide, took Elizabeth

Taylor, who was fired by FilmOn Networks, on. According to people close to the matter, Taylor referred other former employees of FilmOn and Bloom and Allred wound up dividing them up. The evidence as presented in the subsequent trials was not just flimsy, it was shown very clearly to have been fabricated. The defendants even presented credible evidence showing that someone in the Allred Maroko & Goldberg firm called other employees and offered them money to testify–an issue that is under investigation with the California State Bar.

David has vowed to fight the fake MeToo cases brought by Allred and Bloom, and to sue the two firms into oblivion. He’s not the only one trying to raise the alarm about Bloom and Allred profiteering on fake MeToo cases, Daphne Merkin wrote in the New York Times about it. So did Caitlin Flanagan in The Atlantic. Emily Yoffe wrote a heartbreaking story in Reason about a young journalist who was destroyed by Lisa Bloom-style reputation destruction on social media over some private moments with friends.

Bloom and Allred seem to be intent on doing as much damage as they slip further and further from credibility. Their TV contracts are drying up, they’re clients are jumping ship. Bloom client Taylor could not be found to testify for fellow Allred accuser of Alki David Lauren Reeves last week for instance despite her promises.

And Bloom and Allred seem to be trying to grab as much money as they can on their way down — even though they know they’re schemes will eventualy be revealed–perhaps in Ronan Farrow’s next book.