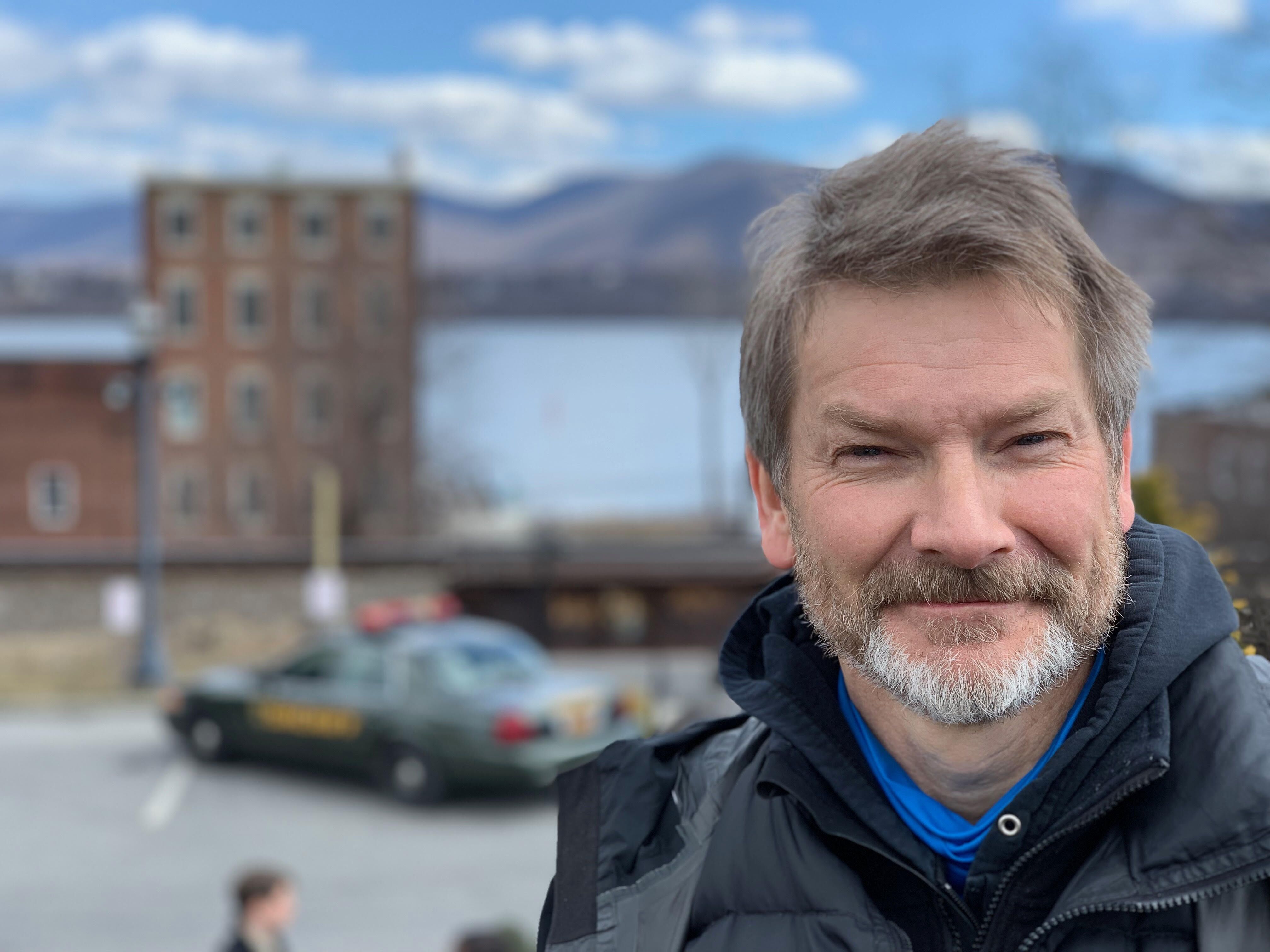 While capturing the title murderer in the new movie, ‘Trick,’ may be an elusive task for the protagonists, the ease of creating another chilling horror thriller isn’t an arduous challenge for director Patrick Lussier. The helmer co-wrote the script with his frequent collaborator, Todd Farmer, who he previously collaborated with on the fellow holiday-themed slasher, ‘My Bloody Valentine,’ as well as ‘Drive Angry.’ Together, the duo is effectively terrorizing a new small community with another evasive, terrifying killer. The mysteries behind the ruthless, deadly antagonist in the scribes’ latest feature is now being unwrapped, as RLJE Films is releasing the drama today in theaters, as well as On Demand and Digital HD.

‘Trick’ opens on Halloween night in 2015, when Patrick “Trick” Weaver (Thom Niemann) massacres his classmates at a costume party. After being arrested, he manages to escape police custody, but not before being shot five times by Detective Mike Denver (Omar Epps). After the shooting, everyone believes Trick must be dead. But when a masked killer reappears the following Halloween, and every Halloween after that, they realize the nightmare isn’t over. With Trick wreaking havoc and killing innocent people in increasingly terrifying ways, Denver will stop at nothing to finish what he started, and bring the carnage to an end.

Lussier generously took the time recently to talk about co-writing and directing ‘Trick’ during an exclusive interview. Among other things, the filmmaker discussed how he and Farmer spoke about how they could delve back into the slasher subgenre, following the release of ‘My Bloody Valentine’ a decade ago, which led to the evolution of Trick Weaver’s story. He also mentioned what a lasting and profound effect that Wes Craven has had on his horror career, after Lussier edited several projects for Craven over the course of two decades, including the original ‘Scream’ trilogy.

ShockYa (SY): You reunited with Todd Farmer, your co-writer from ‘My Bloody Valentine’ and ‘Drive Angry,’ to write the script for ‘Trick.’ What was the inspiration in delving back into the slasher subgenre to create the story for ‘Trick?’ How has working with Todd for the past decade on your previous two features influenced the way you created the screenplay for your latest horror feature

Patrick Lussier (PL): Todd and I spend a lot of time talking ‘what ifs,’ ‘could this happen’ or ‘what would you do in that situation,’ and that sort of thing. Like RPG (role-playing games) without rules or dice, we just let our imaginations run free into dark terrain. Over the last decade or more-we’ve actually been working together in various forms since 2002-Todd and I have developed a shorthand that allows us to riff off each other’s story sense.

SY: In addition to writing the script for ‘Trick,’ you also directed the movie. How would you describe your helming style on the set of the drama? How did co-scribing the screenplay influence your directorial style?

PL: For ‘Trick, cinematographer Amanda Treyz and I wanted to do something aggressive and mostly handheld to bring the audience into the action with more immediacy, especially given that we were tracking investigators more than Trick himself. Todd and I wrote the screenplay and did all our production rewrites with this visual approach in mind. It also afforded the actors to have more freedom with the script, and allowed us to explore different threads from take to take.

SY: The film stars Omar Epps, Ellen Adair, Kristina Reyes, Jamie Kennedy and Tom Atkins. What was the casting process like for the drama?

PL: The prep on this film was very truncated. Given we were shooting in Newburgh, up in the Hudson Valley, I couldn’t make it to casting sessions, which I normally would never miss. Luckily, Judy Bowman, our casting director, did an excellent job presenting great performers to audition. Todd and I would look at the auditions together and compare notes, and talk about who we felt was not only best suited for their individual role, but could also play off the other cast members we were considering.

Ellen and Kristina were far and away our first choices for Jayne and Cheryl. Ellen displayed the perfect amount of skepticism and camaraderie, while Kristina had embodied both wounded survivor and kick ass final girl.

I had a great experience working with Omar Epps back on ‘Dracula 2000,’ and had been looking for an opportunity to reunite ever since. He became the perfect choice for Denver, and created and enhanced the character’s stoic obsessive nature with a determined need to protect those he believes are still in danger, regardless of the personal cost. Omar’s portrayal became more important to the dynamics of the film then Todd and I at first realized. After his first day on set, we knew having Omar in the lead for ‘Trick’ would elevate the whole film.

I met another fellow Wes Craven alumni, Jamie Kennedy, just before I left for Newburgh to discuss the role of Dr. Steve. His schedule was pretty jammed, but he didn’t want that to get in the way of taking part in the film. He had some great ideas to enhance his character, which Todd and I completely embraced.

Lastly, the great Tom Atkins, silver fox and friend extraordinaire – there’s not a film Todd and I have written in the last few years that doesn’t have a part for Tom in it. We love Tom, and feel it is an honor to work with him, now for our third time (after ‘Drive Angry’ and ‘My Bloody Valentine’).

SY: Once the actors were cast, what was the process of working with them to create their characters’ relationships and motivations?

PL: I spoke with each member of the cast individually, asking how they see the character, and then talking through my interpretation of that. Each arc was very clear, and I like to give each actor freedom to make their characters their own. I feel it’s important to tell them that they are now the keepers of their characters, and I’m just a guide. They find the strength, vulnerability, sorrow and fury.

SY: In addition to working with the cast on creating their characters’ emotional arcs, what was the process of collaborating with them on their physicality and stunt work?

PL: Each of the actors got to do a lot of their own stunts, especially in the fight sequences. Corey Pierno, our stunt coordinator, did an excellent job identifying each actor’s strengths, and how they could best sell the action.

For certain sequences, we had great stunt doubles for each of the lead actors, including Suo Liu, who did the majority of the doubling for ‘Trick.’ Liu is a brilliant martial artist and acrobat, and gave the high speed ferocity for the character we wanted. Liu and Corey also worked with the cast on how to best interact with Trick, and sell the greatest jeopardy and cinematic mayhem.

SY: ‘Trick’ was shot on location in Newburgh, New York and the surrounding areas along the Hudson River Valley, like you previously mentioned. What was the process of deciding where you would shoot the movie, and working with the drama’s production designer, Deana Sidney?

PL: We had initially talked about shooting ‘Trick’ in Los Angeles, but budgetwise, we couldn’t make that work. After looking at several possible locations, we decided on Newburgh, largely due to its river proximity and how cinematic the town itself looks.

Arriving there, Amanda Treyz, Ita Kennedy and Deana Sidney traveled with Zori Davidkova our location manager all over Newburgh and the surrounding towns, in order to find the look for the film, and figure out how we’d craft the story visually. Deana had great ideas on how to feature the locations we found, which allowed us to shoot only two days on set, while the rest was shot out in the field. Newburgh is beautifully historic and visually stunning. Having shot there, I can’t imagine the film taking place anywhere else.

SY: What was the process of collaborating with the film’s Director of Photography (DP), Amanda Treyz, who you also mentioned earlier, to determine how you would shoot the drama?

PL: Amanda and I first worked together in 2018 on the Into the Dark movie, ‘Flesh & Blood,’ for Blumhouse and Hulu. We very quickly fused our movie-languages together and instinctively found the visual style we wanted to use.

Since ‘Trick’ takes place over multiple years, Amanda had the brilliant idea of shooting the past sequences, from 2015 to 2018, flat, and the 2019 present day portion (which is about two-thirds of the film) anamorphic. While this distinction may be subtle to the uninitiated, it does give a different vibe from one part of the film, and allows the present day part of the story to feel larger in scope.

Amanda also was the camera operator for most of the film, which further enhanced our shorthand, especially in the freewheeling handheld approach we were taking. I would be as close to camera as the sets would allow, to very quickly give new direction to the actors where needed. With each reset or take, Amanda would offer something different, or enhance the camera move in concert with the performance notes. As operator, as well as DP, Amanda became very close to the cast, as well; she worked with them as closely as I would, to create the choreography between them and her.

SY: In addition to writing, directing and editing your own features, you also edited the original ‘Scream’ trilogy, as well as other projects for Wes Craven for more than 20 years. How did your experience working for West influence how you blend your nostalgia for the slasher genre, while also crafting your own new, unique blend of mayhem and mystery?

PL: It’s been four years now since Wes passed away, and he’s still very much in my thoughts every day. I don’t think there’s anything I have done or will do where Wes isn’t an influence on my work. I am so grateful to have had the time with him that I did, to have been mentored by such a true master of his craft, and a complicated, funny and kind human as well.

Wes never approached the genre with anything short of serious respect. He understood it instinctively, and taught me that horror at its core is one of the oldest forms of storytelling we have as a species.

Having been part of the ‘Scream’ series, I became very aware of ‘slasher-mechanics’ and the push and pull of storytelling within them. Todd and I discussed at length how we could approach ‘Trick’ with callbacks to slashers gone by, and how we could then twist that into something unique to us. All the while, especially in the shooting, I’d think back on all the conversations I had with Wes over the years, especially during the ‘Scream’ films, during which we talked about how to work the story for the best audience experience.

Cancel reply
By The Grace of God Review: The film is absorbing, though not likely to raise the blood pressure of anyone
Ethan Hawke Searches For His Place in the World in Adopt a Highway Official Trailer and Poster
To Top