“I can’t stand by and let Allred take on more victims.” In a shocking interview with the Daily Beast, heroic Summer Zervos describes years of bullying by the famous TV attorney that triggered a California State Bar investigation. 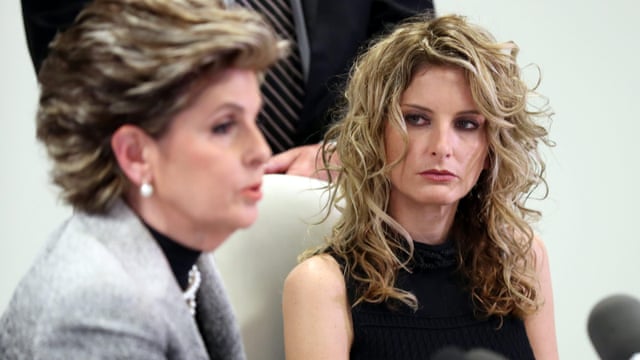 Gloria Allred at the TV conference she pushed Summer Zervos into, shortly before threatening her not to leave her firm over revelations about Allred’s hush money profits related to silencing Harvey Weinstein victims

Revealing true heartlessness on the part Gloria Allred, interviews and documents show the famed feminist TV attorney bullied and denegrated her own client in a MeToo case against Donald Trump. Allred even threatened her in a very Mob Boss/Harvey Weinstein-like way, saying, “Things will get much worse for you if you leave our firm,’ according to the Daily Beast. Summer Zervos, who had come to her for help after being referred to Allred by daughter Lisa Bloom, was called “Dime-a-dozen” by Allred, and “Not Memorable.” Allred refused to take Zervos’ case back in 2011, but jumped at the chance once Trump became President and she knew she could get some attention for it.

In fact, the Daily Beast and the interview with Zervos make clear that Allred rushed Zervos into a televised press conference once she took the case, clearly intent on milking the situation for all the media she could get, despite Zervos’ misgivings. Zervos also told the Beast that Allred chastised her by phone and belittled her in emails. Allred refused, repeatedly to disclose the 2011 conversation they had which would have supported the notion that her claims in 2016 were not politically motivated. Shockya’s legal expert speculates that Allred wanted to avoid her own embarrassment that she didn’t take the case on its merits five years before, but only took it when she saw the publicity it would bring her.

In fact Allred lied brazenly at the press conference when she said that Zervos had told only two close friends about her Trump allegations since she had told Allred herself.

Zervos is being called a hero for speaking out against Allred. “I realize speaking publicly about Gloria Allred could make my case against Trump more difficult,” she told the Daily Beast. “But I can’t sit and watch her take on more victims and not say anything.”

In a truly startling exchange, Zervos complained to Allred about the revelations that Allred had profited by brokering multiple hush money deals with alleged serial rapist Harvey Weinstein and his victims. The fact that Allred’s daughter Bloom was also revealed to have been actively destroying victims on Harvey’s behalf (in actions that a new suit from Rose McGowan in federal court call racketeering) were also tarnishing Zervos case.

“It is unfair that this situation makes me appear less credible while simultaneously adding fear and lack of trust to victims and future victims of powerful men,” she wrote in an Oct. 7, 2017, email reviewed by The Daily Beast. “I try to walk a day in other people’s shoes but I do not understand.”

“I do not understand,” Allred responded to Zervos. “Are you a victim of Harvey Weinstein?”

In a move that sounds right of the Harvey Weinstein/Black Cube playbook, Allred actually threatened Zervos to not leave her firm. Allred warned Zervos, “How much worse things would get for her” if she tried to leave the firm, according to documents reviewed by the Beast. Zervos did fire Allred. And when she found out five months later Allred was still talking about the case in public as if it was still hers, Zervos filed a complaint with the bar, calling Allred an “unethical opportunist who repeatedly goes against clients’ written wishes and agreements.”

The bar investigated the claims and, given how powerful Allred is, returned a decision it will not pursue action. But Zervos is undaunted, and has filed a request to reopen the ethics case with the bar. Allred is already under investigation by state bars in California and Washington D.C. for other ethics violations, including one filed by the late attorney Barry Rothman that shows Allred and her firm offered money for false testimony in a case against tech executive Alki David. Evidence of the offer has been entered in recent cases in L.A. Superior Court.

Zervos is not the only high profile client to fire Allred and/or Bloom since the Weinstein dirty tricks were revealed in the book She Said and in Ronan Farrow’s Catch and Kill. One of the key Jane Doe’s suing the Jeffrey Epstein case has fired Allred for undisclosed reasons (though Zervos’ case certainly provides clues to why someone would want to fire Allred). Bloom was forced to pull her case against Rep. Tony Cardenas in June after ethics violations–possibly involving fabricated evidence–were revealed.

Even worse, Bloom was forced to pull her case against Usher for ethics reasons–apparently her Herpes client had “Unclean Hands.”

In one of the twisted network of cases against Alki David run by Bloom and Allred, Elizabeth Taylor, a Bloom client whose case ended in a mistrial in David’s favor, refused to testify on behalf of Allred client Lauren Reeves, causing speculation that Taylor may be considering firing Bloom. (Allred, in hiding over the Weinstein hush money disgrace, had sent Nathan “Gopher” Goldberg to try David)