The TV Attorney Lisa Bloom, who is the villain in the bestselling books She Said and Catch and Kill, is now being sued under RICO Act statutes by her alleged smear-victim Rose McGowan. “Diabolical,” the suit says 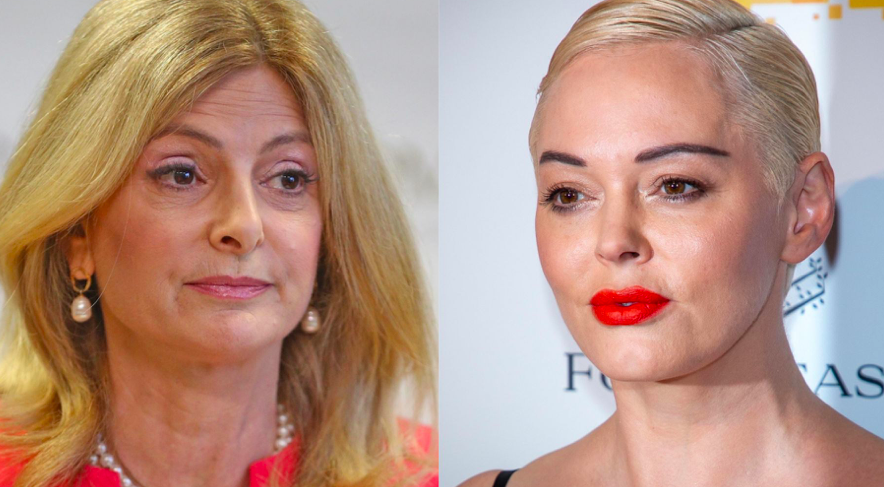 Photo: Lisa Bloom shows off a new wig while thinking of ways to gaslight Rose McGowan in exchange for cash and possible TV deals from Harvey Weinstein

In an earthshaking suit filed in U.S. district court in California, Harvey Weinstein and Lisa Bloom are named, and are charged with conspiring “to seek and suppress information about other women who might reveal his misconduct, harm his reputation, and potentially report his sexual misconduct,” the lawsuit claims. “Together, they worked in concert for more than a year to silence Weinstein’s victims and the journalists who were reporting Weinstein’s abuses.”

According to the L.A. Times, the suit quotes heavily from the two Lisa Bloom and Harvey Weinstein books, She Said and Catch and Release, and the books corroborate her claims.

The book She Said detailed a memo from Lisa Bloom to Harvey Weinstein in which she mocked her past clients for being “crazy liars” and said, “I’m your Girl!” for destroying Rose McGowan’s reputation ahead of her going public with her claims that Weinstein raped her. Bloom was working for Weinstein at a rate of $895 per hour and is believed to have been hoping for a TV deal as well.

In the more recent book Catch and Release, Ronan Farrow described Bloom misrepresenting the fact that she was working for Weinstein, and ratting him out to Weinstein who than got his story killed at NBC. (The story eventually ran in The New Yorker and won a Pulitzer Prize.)

Bloom is also under fire for her actions in a string of cases she shares with her mother Gloria Allred in Los Angeles against tech and entertainment mogul, Alki David. In the linked civil employment cases, David has testified in court that the mother and daughter TV lawyers have conspired, offered witnesses jobs and money, and exploited loopholes that let witnesses testify about unrelated actions when a case is designated as a “MeToo” case. David has denied any wrongdoing and vowed to fight all the cases and bring action against Bloom and Allred. The L.A. Times recently wrote about how David has become a defacto ambassador for “the wronged men of MeToo.” Fox News has been more blunt–running the headline, “Lisa Bloom and Gloria Allred are the Real Criminals.”

Bloom flubbed one of the cases, Taylor v. David, which ended in a mistrial even though David was representing himself for the first time in his life. The jury sided with David 8-4. In another case, Jones v. David, Bloom was slapped by the judge for overbilling half a million dollars in legal fees. That case is on appeal.

The 11-count lawsuit alleges two counts of violating the RICO Act, as well as wiretapping, fraud and violating the Bane Act, a California anti-intimidation/coercion statute. Also named in the suit is Black Cube, the nefarious Israeli dirty tricks firm.