Shocking texts and police report show “MeToo” accuser issued mob-style threat to ex-lover saying her 2-year-old will be harmed. This is the evidence and testimony Allred’s firm committed forgery and fraud to try to hide

In the first day of Mahim Khan v. Alki David, the accuser sat at the plaintiff’s table with her head down, unable to look the man she has accused in the eye. Apparently she has a lot to hide. Her lawyer, Nathan “Giligan” Goldberg, junior partner at Allred & Maroko, was caught out early in the trial forging defense counsel Elly Garofolo’s signature in order to eliminate certain evidence and witnesses from the trial (read the full complaint here). Now, that evidence has come to light in the form of text messages in which Allred’s client Khan threatens a witness repeatedly–saying that her 2-year-old baby could come to harm because she was willing to testify as a witness for the defense. A police report shows that the Woodbridge, CT police took witness Lauren Berkley’s complaint on November 1st, and that Officer Rodriguez-Perez took action to restrain Khan from making further threats.

David is representing himself, as he did in a September trial brought by disgraced Harvey Weinstein abettor Lisa Bloom and another ex-employee who David says conspired to extort him after Gloria Allred illegally revealed to the group a sealed financial document about David. That trial ended favorably for David: Judge Liu declared it a mistrial with the jurors favoring David 8-4. Ellyn Garofolo, of Venable LLP, is representing Alki’s companies, FilmOn and Hologram USA, and has shredded the accusers and their witnesses in court time and time again.

The texts show that Khan was angry at the witness for answering questions honestly and lawfully from David’s attorneys. They also show Khan saying that Berkley should support her in her suit against David whether its based on truth or not, simply because it is a “MeToo” case. Then Khan writes, referring to Berkely’s 2-year-old daughter, Grace, “You’re not a good person Lauren. You need mental help and to gain a heart. I hope nothing happens to Grace but karma is real. And you will get yours. Mark my words.” 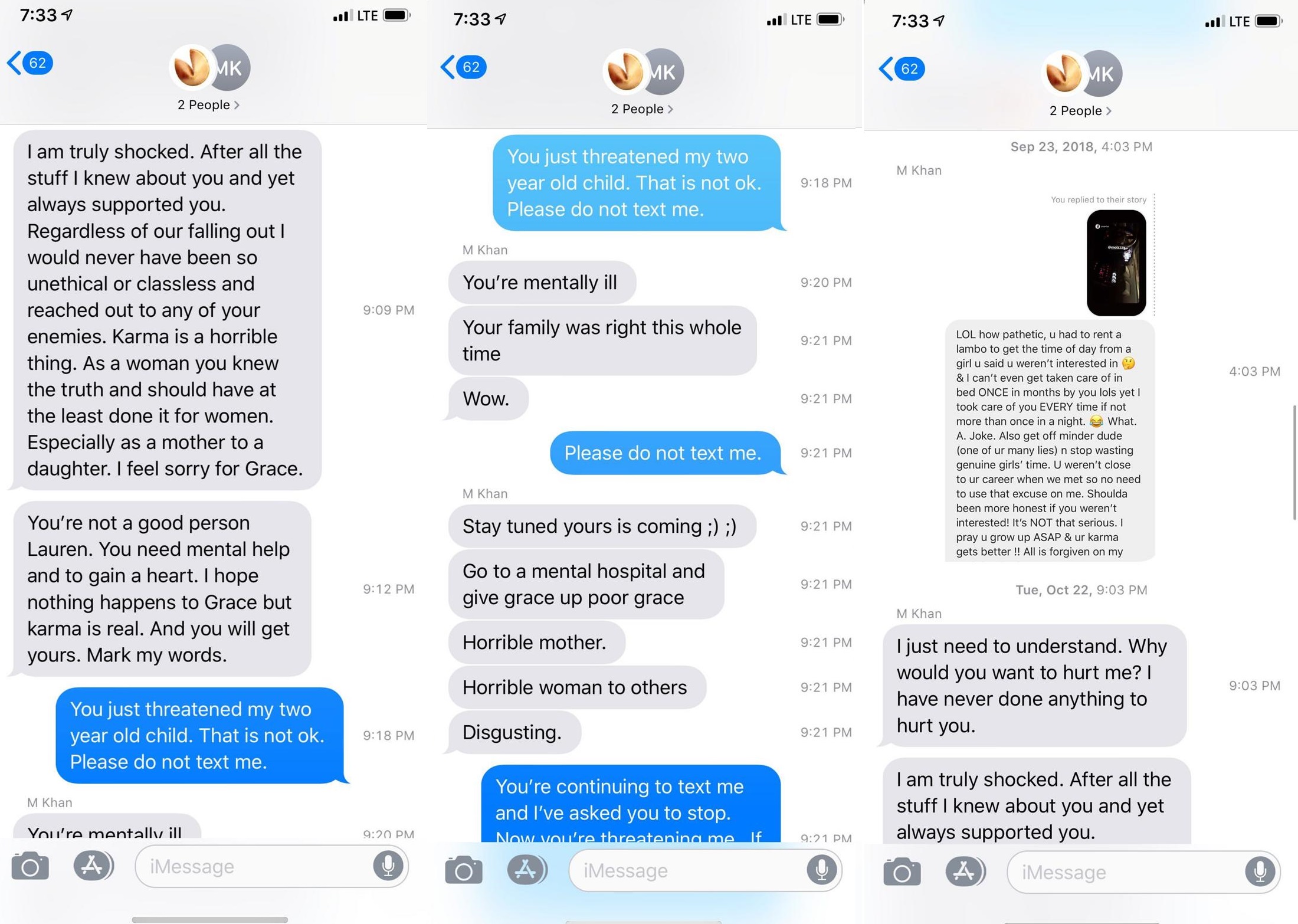 Berkley was so shaken by the threat she immediately called the police.

Tampering with witnesses, and offering bribes and jobs in exchange for testimony, has been a repeat tactic by Bloom and Allred in their cynical use of the MeToo movement to grab cash by taking contingency cases. The California State Bar opened an investigation into Allred after a witness came forward saying her firm had called him several times to offer him money to testify against David. Texts also show individual witnesses such as Elizbeth Taylor offering money and help getting jobs to other potential accusers in exchange for their help. The core strategy devised by Allred and Bloom has been to bring several cases at once with all the plaintiffs testifying for each other—because of a loophole in the law, so-called “MeToo” witnesses can testify about unrelated matters in support of other plaintiffs, despite having their own financial interests in the outcome of the case. There is no other kind of civil case that allows this.

Garofolo has caught all of the plaintiffs in lies–including embarrassing instances where Bloom and Allred just don’t seem to have bothered to get the concocted narrative straight. Chasity [sic] Jones’ testimony for Elizbeth Taylor, for instance, had no logic to it at all and contradicted Taylor’s account on many points. In last month’s case, Lauren Reeves v. Alki David, several witnesses who the plaintiff had said they would call mysteriously vanished when it became clear that Garofolo intended to use her cross examinations to illustrate the collusion and fraud linking all the cases.

David denied Khan’s claims of harassment in court on Thursday and numerous witnesses have testified on his behalf in the recent trials, including the former exec in charge of HR at FilmOn.