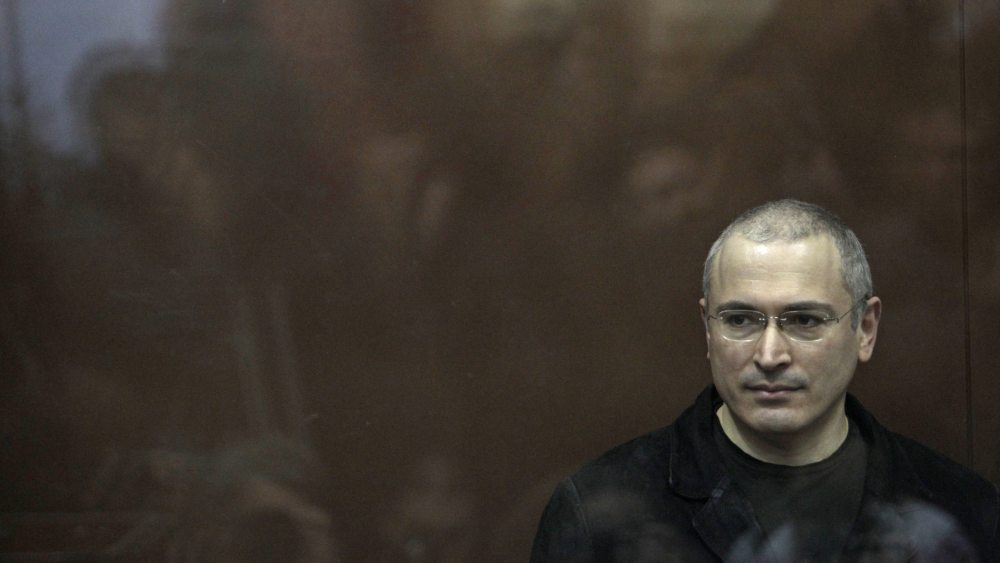 Mikhail Khodorkovsky stands behind bars at a court room in Moscow, Monday, Dec. 27, 2010. A Russian judge starts delivering the verdict in the second trial of jailed oil tycoon Mikhail Khodorkovsky, once Russia’s richest man who is serving an eight-year sentence in a case widely seen as punishment for challenging the Kremlin and is now facing several more years in prison if convicted. (AP Photo/Sergey Ponomarev)

I would like to have been in Moscow to observe the well-preserved body of Vladimir Lenin on the day that “Citizen K” was released. You can be assured that he would be turning over in whatever receptacle is holding his bearded frame, because somehow the gods might have allowed Lenin to watch this movie and weep for what happened to his country, to his fondest dream. Instead of a paradise for workers and peasants, the former Soviet Union, having lost its satellite empire and given up communism, did not replace it with the kind of capitalism that Milton Friedman or Michael Bloomberg or New York Times economist columnist Paul Krugman would cherish. Russia is now under the influence of a wild-west kind of capitalism that some of us here in the U.S. can understand, given that in our country one percent of the citizens owns some twenty-five percent of the wealth. Inequality is even worse over there: at one point the oligarchs, the seven richest men in Russian, controlled fifty percent of the economy. Maybe Putin’s interest in gobbling up parts of Ukraine and feasting his eyes as well on the former satellite countries is his desire to distract the Russian people for what is being done to them.

“Citizen K” Alex Gibney, whose 2005 doc “Enron: The Smartest Guys in the Room,” lays out the case for a corruption that led to the company’s demise, now concentrates on two factors in the Russian economic and political goings-on. One subject is Putin, now the head of his country for eighteen years. The other is Mikhail Khodorkovksky, one of the oligarchs and perhaps the richest man in Russian, whose fall for criticizing Putin led to the state’s seizure of his asserts and his imprisonment in Siberia for ten years. Gibney’s camera switches from president to oligarch, the former winning a series of fake elections while the latter, exiled in London and still holding on to hundreds of millions of dollars stashed safely in countries like Ireland, directs his venom toward the current Russian system.

Gibney has a way of making documentaries into thrillers as he did with Enron, though in this case he relies too much on a hugely intrusively score to give the impression that he is filming not a doc to enlighten us so much as a thriller to capture our emotions. Zipping through a series of historical events that pave the way to the present Russia, Gibney, ignoring Lenin and completely and showing a quick, archived film with Stalin’s picture, points us past Gorbachev’s glasnost era (Gorby is still considered by many in Russia to have single-handedly caused the Soviet Union’s end), through Boris Yeltsin’s turn at bat. With the government about to collapse once again leading perhaps to a return to Communism, Yeltsin bargained with the oligarchs. The state would borrow money from them knowing that they could not be paid back. And the oligarchs would own Russia’s leading assets, including oil.

During that time Khodorkovsky—whom we see as a young man and then as a figure aged largely by his stay in Siberia—by himself created the country’s first commercial bank while at the same time picking up Yukos, a number of Siberian oil fields, at pennies on the dollar. Khodorkovsky is later blamed for the murder of a Siberian oil town mayor who had claimed that Khodorkovsky evaded taxes, and guess who would be the leading suspect, given that it even happened on the oligarch’s birthday! Putin, moving rapidly up the political ladder, determined to go against Khodorkovsky at a time that the rich man exposed state corruption. K was arrested on fake charges and sent on a seven day’s journey to a Siberian prison. One must wonder why Putin did not simply have the man poisoned or shot, as he has been charged of doing for several other opponents.

Behind the lenses, Mark Garrett and Denis Sinyakov give us the long view of Russia’s seat of government while switching to a one-on-one series of interviews with a seated Khodorkovsky. This may not be a Michael Moore type of doc, loaded with wit and humor, but with its quick pacing and a script that allows us in the audience to understand at least a little of what our adversaries in Moscow are doing, it serves as entertainment and enlightenment equally.