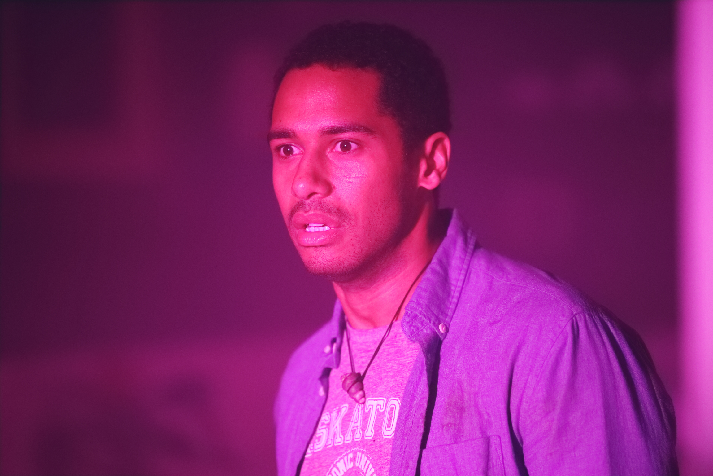 Elliot Knight as Ward Phillips in the sci-fi-horror film, ‘Color Out of Space,’ an RLJE Films release. Photo courtesy of Gustavo Figueiredo.

Few names elicit as much fanfare and appreciation in the modern sci-fi and horror realms as celebrated early 20th century writer, H. P. Lovecraft. The genre scribe’s daunting, frightening tales have garnered so much esteem over the past century that they have been adapted into films several times. But rarely has there been a faithful adaptation that truly captures the cosmic dread that he was known for creating in his stories. That’s set to change with the upcoming sci-fi-horror movie, ‘Color Out of Space,’ which is one of the rare perfect adaptations of Lovecraft’s work, as the intense drama remains accurate and faithful to its source material.

‘Color Out of Space’ was directed by genre veteran, Richard Stanley, who also co-wrote the script with Scarlett Amaris. The feature is based on Lovecraft short story, ‘The Colour Out of Space.’

RLJE Films is set to distribute the sci-fi horror movie tomorrow in theaters. The drama’s official release comes after the drama had its World Premiere at last fall’s Toronto International Film Festival, and was also an Official Selection at the H.P. Lovecraft Film Festival.

‘Color Out of Space’ follows Nathan Gardner (Nicolas Cage), his wife, Theresa (Joely Richardson), and their three children, Lavinia, Benny and Jack (Madeleine Arthur, Brenden Meyer and Julian Hilliard), as they try to adjust to their recent retreat to rural life. But their existence quickly crumbles when a meteorite crashes into their front yard. The mysterious meteorite seems to melt into the earth, which infects both the land and the properties of space-time.

Mutant forms of technicolor flora then start sprouting, while local animals begin to display bizarre deformities. Soon, the Gardners realize that they too are susceptible to the extraterrestrial pathogen, and must escape the contagious cloud that has consumed their farm. With the help of a friendly hydrologist, Ward Phillips (Elliot Knight), and eccentric neighbor, Ezra (Tommy Chong), the family attempts to battle an ambiguous entity that they can barely begin to understand.

Knight generously took the time recently to talk about starring in ‘Color Out of Space’ during an exclusive interview over the phone. Among other things, the actor discussed how he was instantly drawn to Ward’s journey when he initially read the script, and felt connected to the arc that Stanley created for the character. The performer also praised the creative drives, commitment to the characters and story, and work ethics of not only the writer-director, but also his co-stars on the set.

The conversation began with Knight discussing what it was about the character of Ward, as well as the overall script, that convinced him to take on the role. “I was originally sent the script to read, to see if I would be interested in a role in the film,” the actor explained. “When I initially saw what the story was about, I thought, the people in this sound interesting. So I would love to read it and get a sense and an unbiased perspective of the film first.

“So I read the script without knowing who I was going to be up for, and I was amazed-and distraught-after reading it,” Knight admitted with a laugh. “I found that I was really drawn to this character of Ward. I then looked at who I was asked to look at, and it was him.

“So from the beginning, I had a very genuine sense of attachment to (Ward’s) journey, and the story of his character. It’s always great to have the opportunity to share this alternative hero with people in a movie like this,” the performer noted. “In any type of dramatic medium, I like to portray the sensitivity, intelligence and strength that adds to the survival of the main hero.”

Seeing that ‘Color Out of Space’ was going to be directed by Stanley was also something that interested Knight in portraying Ward. “Getting to know Richard helped make the project exciting. I knew this part that he helped create was something that a lot of people were excited about, and waiting for for a very long time.”

With Ward being a hydrologist who helps the Gardner family attempt to battle the entity that they barely understand, the process of comprehending his character’s background was also something that the actor cherished. In order to better relate to
Ward, Knight “chatted with Richard about how he saw Ward, and what his purpose was in the film, because he’s not in the original short story that the film is based on. Richard created him for his adaptation, and wanted him to serve as Lovecraft’s eyes for the audience,” the performer shared.

“So to be able to give (Ward) a personality and demeanor that would fit in with how Lovecraft himself was supposed to have been like, including being separated from society, was a great experience. In the film, Ward doesn’t seem to have any of his own personal connections or life that you get a sense of,” Knight disclosed. “He exists in himself, and comes into the story on his own. He also only interacts with the people who are already there, and I think that’s something that Richard wanted to reflect about Lovecraft.

“To help tell the weirdness in the story, you also need a really good contrast,” the actor also pointed out. “So it helped to have a character who wasn’t as affected by the color; it helps you really get a sense of how far it takes everyone else into this realm of disbelief,” he added.

“Everyone in the cast is so great, and we got along, which helps so much. Even though I wasn’t as involved in many of the scenes as everyone else, since they were a part of the family, and I wasn’t, it really did feel like a family while we were shooting,” Knight also divulged.

“We were all staying in the same place, which helped build a sense of camaraderie that helped raise the stakes on set. That helped us feel comfortable and relaxed in a wild world like this. We also didn’t feel as exposed, and were supported by our team,” the performer added.

Further speaking about how the feature is based on Lovecraft’s short story, Knight admitted that he “wasn’t aware of, or read, the story before” he signed on to star in the film. “I hadn’t really read any Lovecraft before; I just heard the name a few times. It’s not a genre that really crossed my path before,” he added with a laugh.

But once the actor learned about the movie adaptation, he “read the short story. In the beginning and end of the film, Ward’s narrating lines from the actual short story…I think it was really nice to use that.”

Besides reading the short story, Knight also prepared for his role of Ward by looking into “Richard’s work. He’s so fascinating as a person and creator. I think he’s the perfect person to delve into the world of Lovecraft. He not only did it justice, but also brought his own voice into it. He truly understands, and engages with, that level of intellectual horror.

“Richard made something very special. So I trusted him to guide me, and the entire cast, through this world. I’ve never done anything like this before, and I may not get to do something like this again that’s not with Richard,” the performer confessed with a laugh. “So this experience was really very special.”

One of Knight’s favorite memories of starring in ‘Color Out of Space’ was on “a Sunday when we weren’t shooting. I was chatting with Richard before that day, while we were filming, and he invited me to where he was staying during the production. So I went over and hung out with him for a few hours that morning, and we just talked.

“I got to know him as a human being, and he’s the most fascinating man I’ve ever met. He has an unfathomable amount of knowledge about everything you can think of,” the actor divulged with a laugh.

“Richard’s very endearing. It’s nice to work with a director who not only believes in what he’s making, as well as in you, but is also someone who you could easily connect with on a personal level. It makes such a huge difference in the authenticity of the work,” Knight disclosed. “So having him to talk to about the script and characters was helpful.”

Stanley also “wrote us all character biographies. He came to my trailer one day and gave me eight full pages that he had just written out the night before about his thoughts about Ward, including where he came from, who his family is, what his relationship with them is like and what his life was like before the events in the movie happened. He’s so invested in the storytelling,” the performer also divulged. “That’s all you can ask for in a director on set-someone who’s passionate about what they’re trying to communicate on set. That made such a huge difference.”

In addition to embracing his working relationship with the writer-director on the set, Knight also cherished his collaborations with his co-stars. “I know that the actors who played the Gardner family had rehearsal time together, which was great. I wasn’t a part of that, since I wasn’t in those scenes with just the family. But that rehearsal time definitely had an impact on all of us, especially when I interacted with anyone from the family. We got a great sense of the dynamic they created from the time they spent rehearsing together,” the actor added.

“The cast is great; I love them all,” Knight added with a laugh. “I’m such in awe of all of the things that everyone achieved in their own rights, with the characters they played in the story. It’s just so entertaining to watch, and I’ve seen the film a bunch of times.

“I have favorite shots of everyone; I have a favorite shot of Joely, with the knife at the kitchen table. I think Madeleine is so extraordinary; to see the things that she put herself through behind-the-scenes, to emotionally prepare and stay in the zone, was truly impressive,” the performer also revealed. “Brendan also did such a great job as the brother. I’m also obsessed with Julian, who’s a little treasure,” he added with a laugh.

“Nic, obviously, is just fantastic, and he’s so lovely and polite. There’s always so much talk about him as a celebrity, but no one really knows too much about the person. But he’s really professional, and I really enjoyed working with him; I would love to again, if I got the opportunity,” Knight shared.