Determinedly trying to find their rightful place in the world, particularly amongst people who truly appreciate them for who they really are, has become challenging in recent years, with society becoming increasingly dependent on technology to make their lives more convenient. But there are still those who acknowledge the real essence of humanity, and will do whatever it takes to find and protect those true, precious connections, no matter how they view the world, both physically and mentally. That’s certain true for the characters in the crime drama, ‘The Night Clerk,’ including actor Johnathon Schaech‘s versatile and mysterious supporting role.

Michael Cristofer wrote and directed the intriguing and multi-layered ‘The Night Clerk.’ The filmmaker’s latest movie opened in theaters this weekend, and is also available On Demand and Digital HD, courtesy of Saban Films.

‘The Night Clerk‘ follows hotel night clerk Bart Bromley (Tye Sheridan), a highly intelligent young man on the Autism spectrum who’s struggles to connect with the people he meets. In order to better understand normal social interactions, Bart spies on the guests by hiding cameras in the rooms, and watches them on his laptop computer during his overnight shift at the hotel. He also sits in his basement-level apartment in his mother, Ethel’s (Helen Hunt) house, and surveys an array of monitors that capture different angles on the mundane actions of the travelers.

But Bart then witnesses a woman being murdered in her room the morning after one of his shifts while watching the hotel from his apartment. Det. Johnny Espada (John Leguizamo) arrives on the scene, and speaks with Bart’s co-workers, as well as the murdered woman’s husband, Nick Perretti (Schaech). The detective soon begins to believe that the title hotel clerk isn’t being honest with him, leaving Bart to become the prime suspect.

When Bart is then relocated to another hotel by his boss, he forms a personal connection with another beautiful guest who soon arrives, Andrea (Ana De Armas). Through her kindness and straightforwardness, they become friends, and he believes that he must stop the real murderer before she becomes the next victim.

Schaech generously took the time recently to talk about starring in ‘The Night Clerk’ during an exclusive phone interview. Among other things, the actor discussed how he enjoyed working with Cristofer as the writer-director on the drama, as besides being a scriber-helmer, Cristofer’s also an actor. So the filmmaker knew what he wanted for the movie, but also allowed the cast to bring their own ideas to the story. Schaech also praised his co-stars, particularly de Armas and Sheridan, for their versatile acting abilities in the film.

The conversation began with Schaech explaining why he was drawn to play Nick in ‘The Night Clerk.’ He stated, “I heard about the movie through my old acting teacher. She read the script, and thought it was sensational. She told me, ‘Johnathon, you’ve got to get into this movie.’ She had a direct connection to one of the producers, and set me up. I already knew Michael Cristofer, as I previously worked with him on the movie ‘Hush,’ which also starred Gwyneth Paltrow and Jessica Lange.

“I felt I was perfect for this part after I read the script. I loved the screenplay, and thought it was brilliant,” the performer added.

Like Schaech mentioned, the drama was penned and helmed by Cristofer. The actor then delved into what his experience collaborating with the filmmaker was like on the movie. The performer noted that Cristofer “is also an actor, besides being a writer-director. He’s a writer first, so he’s easy to work with as a filmmaker. He knew what he wanted, but he also let us play.

“Michael also cast incredible actors, who I worked with on set, including Ana de Armas. She has a strong presence about her, and she’s very vulnerable. She’s brave and afraid at the same time, and that’s why she’s shooting up to the top,” Schaech noted. “She’s doing incredibly well right now. I hear she’s going to play Marilyn Monroe” in director Andrew Dominik’s upcoming biopic, ‘Blonde.’ “I can see that,” he divulged.

“Michael did a great job directing Ana in our film. To watch her have the ability to go from one side of emotions, straight to the other, was amazing. Michael’s a strong director,” the actor added.

Further speaking of working with de Armas, Schaech added that their collaboration, as well as the rest of their co-stars, was natural. “The movie was shot in Utah, so I got to fly back and forth there, so that I could still see my family. So I didn’t have the full experience of being on set during the entire production,” he shared.

“But while I was on set, I had a great experience working with Ana. John (Leguizamo) and I have mutual friends, so we already knew each other. Helen Hunt was amazing, and we talked about Bill Paxton’s passing,” the performer revealed on a more somber note. “But everyone was diligent about their work. This was a really great experience.”

Working with the talented cast afforded the actors the opportunity to occasionally improvise on the set. “We played pretty tight to the script, which was very well-written. But there was some nuance and improv that we got to play with,” Schaech revealed.

“Michael gave us some exercises so that we could get to know each other. There’s a lot of physicality to the script, and everything was well coordinated. There were a lot of dynamics, as he also writes for theater productions. So there were a lot of bigger staged elements that we had done like they were in a play,” the performer also shared.

Further speaking of the physicality that he and his co-stars had to create for ‘The Night Clerk,’ Schaech noted that the movie’s stunt coordinator, Eliza Coleman, “was on the set for everything that was physical. We did everything ourselves.”

‘The Night Clerk’ was also shot in a way that incorporates a visual style that uses and relies on the existence of spy and security cameras. There were several scenes where Nick is showcased on those security cameras in a hotel. “I’m sure that Tye was keenly aware that there were cameras everywhere. After my character’s informed of all the cameras, I started to pay a little bit more attention to what I’m doing, where I’m going and whether someone else is watching me or not,” the actor shared.

Throughout most of ‘The Night Clerk’s story, Nick is hiding a secret from not only the other characters, but also the audience. Schaech then explained what the process of balancing that undisclosed secret with the character’s perfect public persona was like during the production.

“When you watch court cases, the individual doesn’t think they’ve done anything wrong, even if they’ve performed an act of violence. They’re always pleading their innocence,” the performer pointed out. “So my character was trying to misdirect, and get away with everything from the beginning. Even when he entered a new situation, he was still trying to get out of another situation.”

Further speaking of that secret part of Nick’s motivations, Schaech revealed how he prepared for the role, after he read Cristofer’s script. “I did some research with an intimacy coordinator. There were a lot of stuff that I had to do with Ana de Armas that I wanted to make sure I was respectful of her. I wanted to make sure she was comfortable with everything we did,” he shared.

Following up on the fact that ‘The Night Clerk’ was shot in Utah, like Schaech previously mentioned, he enjoyed the experience of traveling for the production. “Filming has brought me around the world and back. I’ve gone to so many different states and countries, and really do enjoy going away.

But the performer doesn’t like traveling as much as he used to, he admitted. “I have a family. I have a little boy, and am expecting another child. I love being around my family. But work is a gift; I love to work, and don’t mind traveling, and doing whatever’s necessary for it.”

While traveling is one highlight that Schaech has enjoyed throughout his career, he also cherishes making independent films like ‘The Night Clerk.’ “Since the beginning of my career, I’ve loved working with writer-directors,” like Cristofer. “I love when people can write something, and then are there to see the project all the way through. I find that passion to be enticing, even from Tom Hanks, as he wrote ‘That Thing You Do!,’ and then went on to direct it. So I’ve always been a writer-director kind of actor, and that’s what I love about my craft. I enjoy helping story-tellers tell their stories.”

With ‘The Night Clerk’ being one such scribe-helmer-driven indie movie, which is now playing in theaters, and On Demand and Digital, the actor feels the dual distributions is beneficial for this type of film. But he also felt that the drama had the potential to garner a wider theatrical release. “We have Ana de Armas, who’s on the cover of Vanity Fair, and is blowing up; she has two of the biggest movies that are coming out next year. Tye Sheridan is also a big draw; he was the star of ‘Ready Player One,’ which is a Steven Spielberg movie,” Schaech pointed out.

“I also think that the movie could have gone through the festivals, and gotten pull from them, and seen how it played. Since it was filmed in Utah, it could have been a good Sundance movie,” the performer added.

Now that ‘The Night Clerk’ has been released, Schaech is looking to the future, and is interested in doing writing and directing himself. “I have something that I want to direct ahortly. I was a judge at the Nashville Film Festival last year, as I love independent films, and think there are great voices in this space. I love exploring new worlds and characters.

“I’ve also written extensively in the horror genre with my writing partner, Richard Chizmar. He works for Stephen King, and publishes some of his material. So he’s really the horror guy. But when we ventured into that world together, I really loved it,” the writer shared.

“But I’m not really the darkest knight,” the actor noted with a hint of a laugh, “as I’ve found a lot more light with children in my life, as well as a loving wife and a caring environment. I’d love to either be involved in a crime-solving world, like playing a police officer, or get back to more comedies, like with ‘That Thing You Do!‘”

“I have also ventured off and have written a couple of screenplays on my own. I’m looking forward to getting them out there, and making a mark on my own as a screenwriter,” the filmmaker concluded. 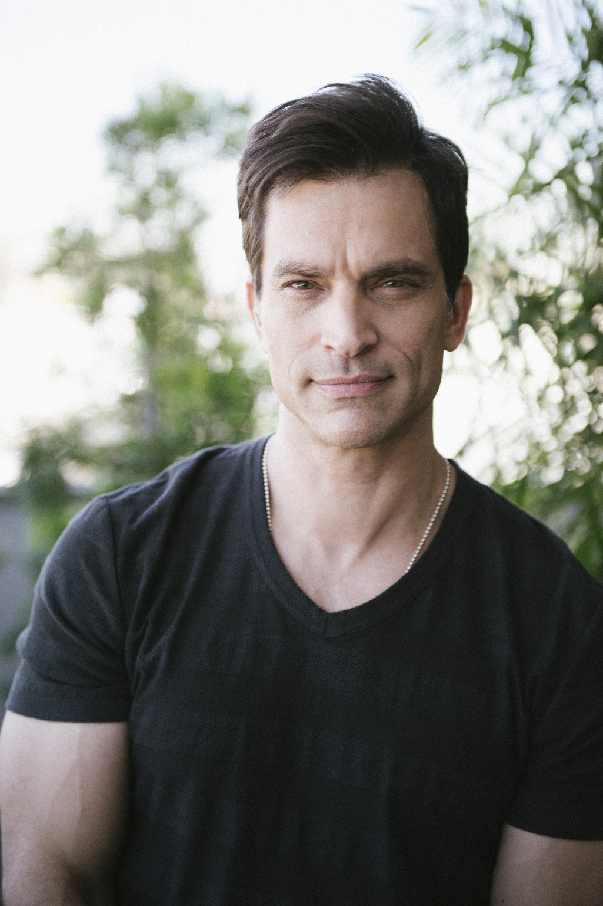