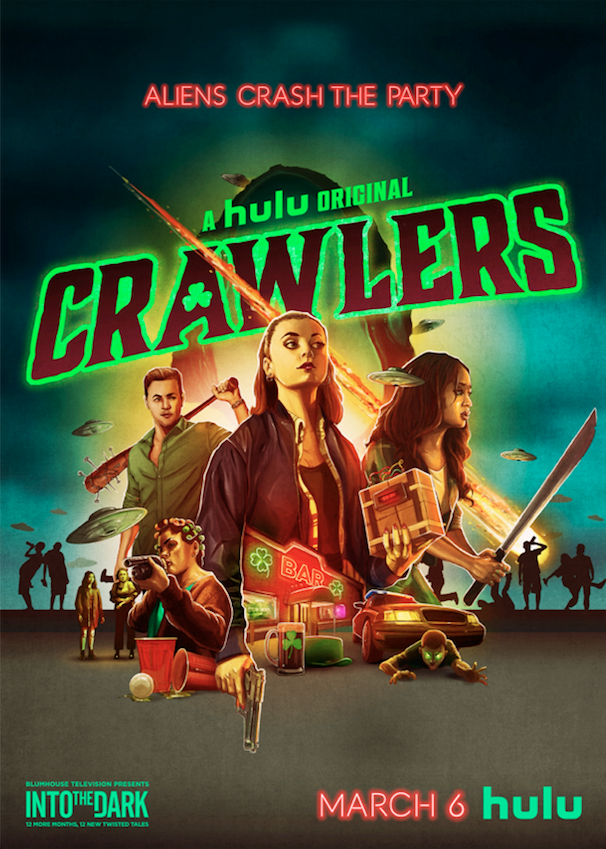 The poser for director Brendan Zuck’s horror-thriller film, ‘Into the Dark: Crawlers.’

St. Patrick’s Day is meant to be a night filled wild parties for young adults who are enjoying their college experiences. While their drunken revelries are meant to take them out of this world, something else is altering their universe in the new sci-fi horror film, ‘Into the Dark: Crawlers.’

‘Crawlers’ was written by Catherine Wignall and Mike Gan, and directed by Brandon Zuck, who made his feature film directorial debut on the project. The comedy-drama premiered on Hulu on Friday, March 6, in honor of today’s celebration of St. Patrick’s Day.

‘Crawlers’ is narrated by conspiracy theorist Shauna (Giorgia Whigham), who recounts the invasion that occurred in Emerald Springs last St. Patrick’s Day. Before the attack on Earth by alien beings, Misty (Pepi Sonuga) is upset while standing outside a college town pub, as she believes her best friend, Chloe (Jude Demorest), is replacing her with her new close friend, Yuejin (Olivia Liang). Chloe is also interested in spending intimate alone time with one of the college frat boys, Aaron (Cameron Fuller).

Once inside the pub, Misty gets drunk, while also encountering Shauna, who’s working as Chole’s drug dealer. Amidst the chaos in the pub, Shauna senses strange occurrence are happening. It’s soon revealed that her instincts are right, as aliens have begun to take over the college students’ bodies, in an attempt to assume dominant control over Earth. The students must then learn how to work together to fight off the aliens who wish to not only take over their bodies, but also their town and way of life.

Zuck generously took the time recently to talk about directing ‘Crawlers’ during an exclusive interview. Among other things, the helmer discussed that he was drawn to work with Blumhouse and Hulu on his feature film directorial debut, after he previously met with them about different projects, and felt his filmmaking ideas synced with their vision for the St. Patrick’s Day installment

ShockYa (SY): You directed the new horror film, ‘Into the Dark: Crawlers.’ How did you become involved in helming the drama, and what was your directorial style on the set?

Brandon Zuck (BZ): I had met with some of the people at Blumhouse and Hulu about different projects, and they knew the kinds of things that interested me. So when a snarky YA sci-fi story came up in the schedule, I was lucky enough to pop into their minds.

My style on set is like the Energizer Bunny. I like to be involved in everything, so I’m usually just running around, interacting with everyone. That being said, I like to find a balance between being available to people for guidance, and also allowing people to have their own voice and style.

When you’re the director. it’s your job to have a vision, and to keep the bird’s eye view of the film on track. But you’re also not always going to be the person with the best idea. At a certain point, actors will know their characters better than you do. Different departments (effects, art, camera, etc.) will have better ideas for their area of expertise than you. It’s important to stay open and remember that.

BZ: The core idea was already there in Catherine Wignall’s original script. She and writer Mike Gan worked to make sure the holiday itself stayed alive throughout the story. For starters, it’s a terrifying holiday in any college town. Everyone’s already acting like a monster, so how are you supposed to find the real monsters?

But it strangely makes perfect sense when you do a little research on Saint Patrick and his most famous accomplishment: driving the snakes out of Ireland. Ireland is one of the few places on earth that has never had snakes. So what’s the origin of the legend?

SY: The drama stars Jude Demorest, Pepi Sonuga, Giorgia Whigham, Olivia Liang and Cameron Fuller. What was the casting process like for the film?

BZ: Casting was a dream. The process was super fast, just like everything on ‘Into the Dark,’ so I would have to say we got very, very lucky. Our cast was amazing. Not only incredibly talented artists, but also just wonderful human beings. There’s no one else I could imagine staying up all night with trapped on a haunted abandoned college campus in Pomona.

SY: Once the actors were cast, what was the experience also collaborating with them on creating the relationships between their character?

BZ: The collaboration was incredible. There were a lot of moving parts. There were many handwritten rewrites being thrown at people in the moments before cameras rolled, and they each nailed it every time. Plus, some of the character relationships actually changed as a result of working together on set. There were plenty of times when the actors would come up with the best ideas, and we’d just run with it.

SY: With the characters trying to escape the aliens that are trying to overtake their town, what was the process of working with them to create their physicality, and the overall action sequences?

BZ: The action sequences were honestly so fun. I love getting people on their feet and running around. Usually we’d start with our plan of how the action of the scene would be mapped out, then we’d run through it all with the actors and the stunts department, and then make changes, based on how it all felt and what ideas or impulses sparked for each person in the scene.

SY: Besides being a sci-fi thriller, ‘Into the Dark: Crawlers’ also incorporates moments of comedy. Why do you feel that having that comedic element was beneficial for this type of story?

BZ: The playfulness was so important for this project. You have to know what kind of story you;re telling and what kind of movie you’re making. The main message we needed to project to the audience early on was that this one is mainly just about having fun. Of course, there’s probably a gritty, grounded, gory version of this story, but that’s not the one we’re telling. So just sit back, eat popcorn, and enjoy.

SY: The story is set in a college town, as the students go out on a pub crawl, during which the aliens try to take over the area. What was the experience of shooting the drama on location?

BZ: We were shooting on this creepy abandoned college campus outside Los Angeles, and it has a wild history. There was one house (Shauna’s) where the lights kept turning on when no one was around, even though there wasn’t power and or a generator.

SY: Giorgia Whigham plays Shauna, who narrates ‘Crawlers’ from a YouTube channel-type vlog. Why do you feel it was important to shoot the story in that way, and reflect the current social culture of people sharing their lives on social media?

BZ: It’s not really commentary on anything so much as just a reflection of a language that’s become so common to our society. We’re so used to seeing people talk to selfie cam that it would almost be crazy to pretend that none of our characters do it.

Beyond that, it’s also just how people try and communicate with the world at large. If you have a message you want to put out there, you have the means to do it. The concept of mobile self-broadcasting would have been science-fiction thirty years ago, but today it’s just part of life.