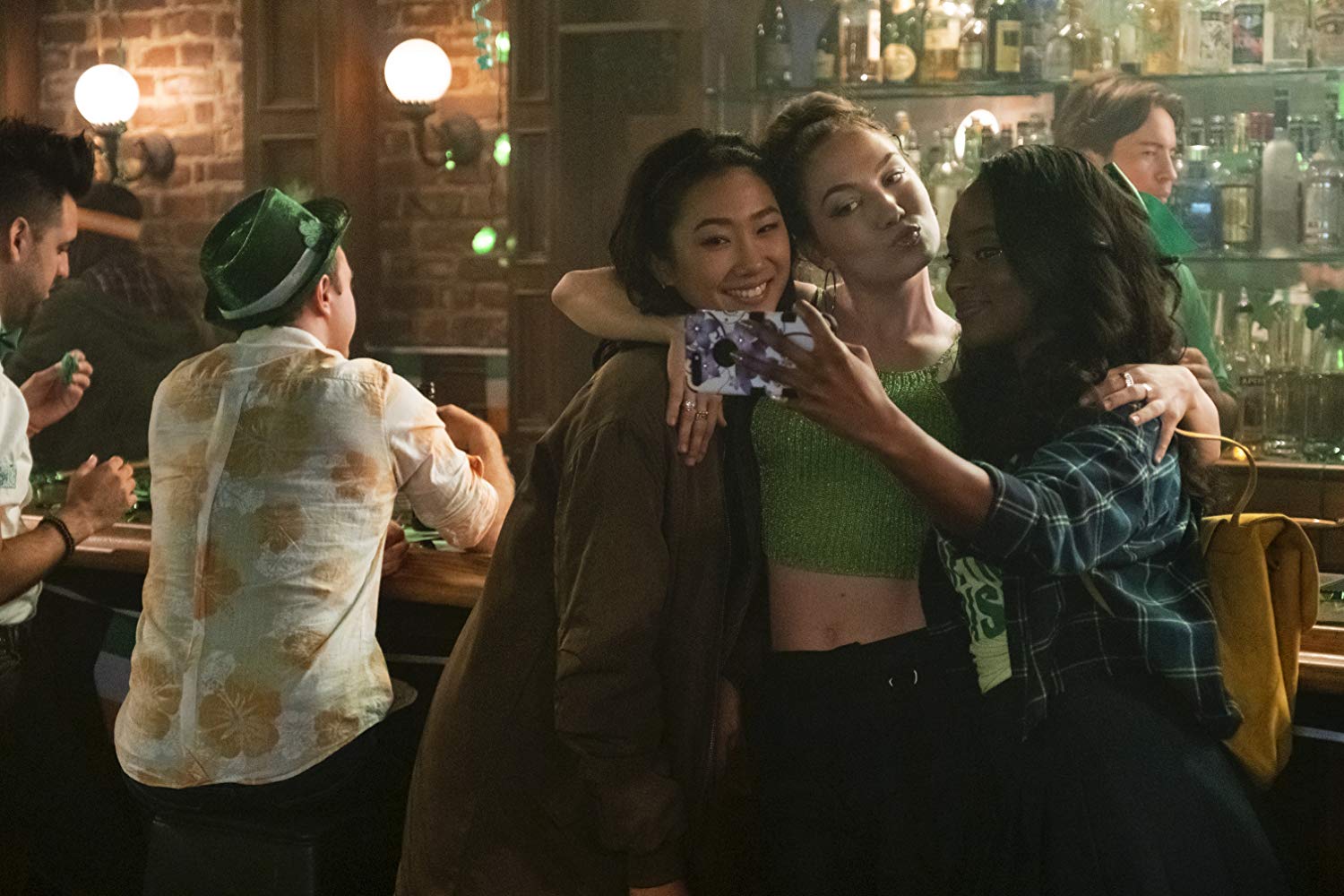 St. Patrick’s Day is meant to be a night filled wild parties for young adults who are enjoying their college experiences. While their drunken revelries are meant to take them out of this world, something else is altering their universe in the new sci-fi horror film, ‘Into the Dark: Crawlers.’ Actress Olivia Liang (the CW’s upcoming ‘Kung Fu’ series reboot) is one of three unlikely friends who band together to save their college town from a vicious horde of body-switching aliens on the notorious college-friendly holiday.

‘Crawlers’ was written by Catherine Wignall and Mike Gan, and directed by Brandon Zuck, who made his feature film directorial debut on the project. The comedy-drama premiered this weekend on Hulu, in honor of the upcoming celebration of St. Patrick’s Day.

‘Crawlers’ is narrated by conspiracy theorist Shauna (Giorgia Whigham), who recounts the invasion that occurred in Emerald Springs last St. Patrick’s Day. Before the attack on Earth by alien beings, Misty (Pepi Sonuga) is upset while standing outside a college town pub, as she believes her best friend, Chloe (Jude Demorest), is replacing her with her new close friend, Yuejin (Liang). Chloe is also interested in spending intimate alone time with one of the college frat boys, Aaron (Cameron Fuller).

Once inside the pub, Misty gets drunk, while also encountering Shauna, who’s working as Chole’s drug dealer. Amidst the chaos in the pub, Shauna senses strange occurrence are happening. It’s soon revealed that her instincts are right, as aliens have begun to take over the college students’ bodies, in an attempt to assume dominant control over Earth. The students must then learn how to work together to fight off the aliens who wish to not only take over their bodies, but also their town and way of life.

Liang generously took the time recently to talk about starring in ‘Crawlers’ during an exclusive interview over the phone. Among other things, the actress discussed that she was interested in appearing in the latest ‘Into the Dark’ installment because she connected with, and understood, her character of Yuejin. She also mentioned that she enjoyed working with her co-stars, as well as Zuck, who encouraged the cast to offer suggestions about their characters and the story.

The conversation began with Liang explaining why she was drawn to play Yuejin in the new horror movie. “I had auditioned for a few of the ‘Into The Dark’ projects throughout its first and second seasons. They kept bringing me back, so it seemed like they were trying to find a good fit for me. I got really close to (being cast in last August’s installment,) ‘School Spirit,’ but it didn’t go my way,” the ‘Legacies’ alum shared.

“Then with ‘Crawlers,’ I sent in one videotaped audition. I really just locked into Yuejin immediately, and then ended up booking the part. So it was a pretty seamless process, but it just took a while to find the right project for me,” the actress added.

Once she was cast, Liang cherished the experience of then getting to work with Zuck as the director of the film. She then delved into what her collaboration with the helmer was like on the feature, particularly in building Yuejin’s arc and motivations.

“Brandon’s amazing. He was super open to suggestions about the character and story. Like you said, he was open to collaborating with us to make this feel like a project we all contributed to, and believed in,” the performer gushed. “So he’s so amazing to work with, and is so creative and funny; he has the best ideas.”

With ‘Crawlers’ also starring such a diverse cast of actors as Demorest, Sonuga, Whigham and Fuller, Liang also adored the experience of collaborating with her co-stars on creating the relationships between their characters, as well. “The rest of the cast was amazing,” she further gushed. “We all met at the table read. Everyone is so friendly and funny, and we all got close quickly. That happens a lot on these sets, because we spend so much time together.

“With this film in particular, we were all about the same age. So it felt like we were hanging out with friends,” the actress further shared. “We’re all different from our characters, so it was fun to go from on-set to off-set. Just watching our dynamics shift from screen to real life was great; everyone is super lovely. I became especially close with Cameron and Giorgia.”

Further speaking of how Zuck encouraging the cast to offer their own input on their character, Liang and her co-stars did some improv on the set while they were filming. “Like I said before, Brandon’s super open to collaborating on ideas. So we would do a few takes that stuck to the script. He would then encourage us to have fun, and we would come up with lines all together. Cameron, in particular, was really good about improvising things into the scene,” she noted. “It was all about communicating.”

Besides being a sci-fi thriller, ‘Crawlers’ also incorporates moments of comedy into the script. The performer expressed that she felt that having that comedic element was beneficial for this type of story. “I think we very quickly realized that we had to really lean into this genre, and be self-aware about it. I think that’s where a lot of the comedy came in from.

“Yuejin’s the person who’s like, ‘This is ridiculous. Aliens! Are you guys kidding?,'” Liang revealed. “So I think our characters being so aware of how ridiculous our situation is is where a lot of the comedy comes from.”

With the feature being a sci-fi-horror-thriller that follows the friends as they band together to save their college town from the body-switching aliens, the actress explained what the experience of creating the physicality for Yuejin was like on the set. “Cam and I had a little scuffle in front of a car after-spoiler alert!-they realize that Yuejin has become an alien. So that was really interesting, because that was my first time ever doing a choreographed fight scene,” she revealed with a hint of a laugh.

“It was a little clunky at first; I think you can see in the blooper reel that we have no idea what we’re doing…But it was a very collaborative effort with Cam and the stunt coordinator. The crew really worked with what made us feel comfortable, and what looked natural,” Liang added.

With the story being set in a college town, as the students go out on a pub crawl, the performer enjoyed the experience of shooting the comedy-drama on location. “We found this weird space all the way east of L.A. It’s a set that was built for movies, and one of the sets is for a college town. That’s where we filmed a lot of our outdoor running scenes, as well as the forest scenes near Shauna’s mom’s house. But the pub was filmed on an actual sound stage,” she revealed. “Our set dressers were amazing; they really made it feel like St. Patrick’s Day in an Irish town,” Liang noted with a laugh.

The actress also expressed her appreciation for being able to work with Blumhouse Television on the Hulu production. “It was a wonderful experience to work with them. I was watching these ‘Into the Dark’ episodes before I booked ‘Crawlers.’ They’re so fun, and Blumhouse is so good at balancing the comedy and horror elements. Hulu’s also a dream platform to be on…It was a lovely experience, and all of the producers at Blumhouse and Hulu are lovely people,” she concluded.