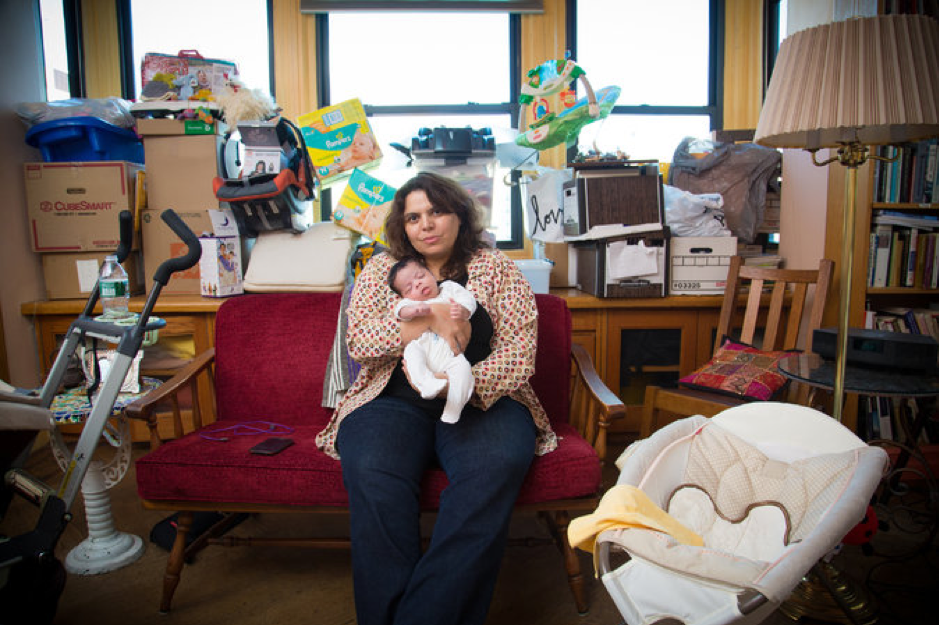 Judith Helfand, the co-writer-director-producer of the documentary, ‘Love & Stuff.’

Reflecting on memories of family rituals and celebrations is an emotionally powerful experience for many people. That’s certainly the case for Peabody Award-winning filmmaker, Judith Helfand, as she chronicles her strong bond with her late mother, Florence, in the new documentary, ‘Love & Stuff.’ With the movie, Helfand created a touching portrait of her close bond with her mother, who died just before the director was able to adopt her newborn daughter.

‘Love & Stuff’ shows how seven months after helping her terminally ill mother die peacefully in home-hospice, Helfand became a new single mother at 50. Overnight, she’s pushed to deal with her mother’s belongings, including 63 boxes of her parents’ heirlooms, which overwhelm her office-turned-future-baby’s room, while also becoming a new mother herself. The filmmaker also had to contend with the reality of being a half century older than her new daughter.

Helfand also shared her deeply personal journey of undergoing gastric sleeve surgery in the movie. She also revealed that she learned at the age of 25 that she has a rare cancer that would prevent her from ever having children. The illness was caused after her mother was prescribed diethylstilbestrol (DES) during her pregnancy, in order to prevent miscarriage. But the drug was later proven to cause reproductive cancers in the children of mothers who took it.

Helfand generously took the time recently to talk about directing and producing ‘Love & Stuff’ during an exclusive interview over the phone. Among other things, the filmmaker discussed that she was drawn to make the feature becase she wanted to document and share the grief she experienced while she initially coped with her mother’s death. She also mentioned that she hopes to continuously engage with audiences who watch the documentary during Hot Docs’ virtual festival, especially those viewers who have gone through similiar experiences as she has, so that they can discuss how they all approach their familial relationships.

ShockYa (SY): You directed the new documentary, ‘Love & Stuff.’ What inspired you to make the film, and share your story in its narrative? What was the process of helming the movie like?

Judith Helfand (JH): The feature started off with a short, which was also called ‘Love & Stuff.’ The idea for both films was inspired by two things; one was that I couldn’t bear to be alone with my mother’s stuff after she died. Having to go through it, without any kind of documentation (would be difficult). I knew what I was doing was a universal rite of passage that so any people have to go through when a loved one dies.

As a daughter, who couldn’t really live with the idea that my mother was dead, I also couldn’t live with the fact that all of that incredible energy could go up in smoke. I also didn’t want to waste what I knew would be an extraordinary moment, and what all people will have to do for generations to come. So I thought that maybe I could be a little helpful.

During the last couple weeks of my mother’s life, I picked up a camera, which I was initially hesitant to do. I didn’t want her to be embarrassed about how ill she was looking, despite my knowing that she looked beautiful at all times. We were also having those important last-minute conversations, and I couldn’t let them happen without holding onto them in some way…Using my camera has always been how I process life…Picking up my camera was a threshold of how my parents and I passed through together.

Using the camera allowed me to consider how I could use my responsibility as a filmmaker to tell stories that can help other people. I’ve been doing that since I was 25-years-old in 1990. So it just made sense to me in a lot of ways to just pick up my camera…during the worst moment in my life when I lost my mother…For me, whenever something’s painful or hard, I pick up a camera.

So I had that footage, and made the short, and then (her daughter,) Theo (short for Theodora) arrived. Then I had the struggle of, how do I become a mother without my mother, when I really needed her? So it made sense to continue to collaborate with a crew that represents the first audience for a movie like this.

SY: What was the experience of figuring out how you wanted to shoot ‘Love & Stuff’ with your director of photography, Daniel Gold?

JH: On this movie, there was so much collaboration between myself; my editor, David Cohen; later on, our other editor, Marina Katz; and at all times, my director of photography, Daniel Gold. When we needed to get other people to shoot, because he wasn’t available, there was still deep collaboration all of the time.

When we were deciding what to shoot, some things just presented themselves, like unpacking my mother’s stuff while the baby was home, and I was trying to learn how to mother. As the years went on, events such as the holidays and Theo’s birthdays, as well as the evolution of me being able to get on the floor with my kid, and run next to my kid while she was on her scooter, became easier and more natural.

We always knew that this was going to be a longitudinal story. For awhile, we thought it was going to be a series. One of the major parts of the series would be about getting and going through all the archival footage, which was shot over 25 years.

The biggest struggle was editing it together, and figuring out what kind of struggle this can be, and using the archival material. We also had to figure out how to let go of some the material we shot that ultimately didn’t fit into the story.

SY: ‘Love & Stuff’ is having its world premiere online, as part of Hot Docs 2020. How has the experience of being a part of the festival been like?

JH: Well, I (recently) did an online interview with one of the senior programmers. I imagine that festival goers who watch the movie online can then watch the Q&A.

I did offer, and stand by my offer, to also do a Zoom call with audience members who are interested in furthering their experience, and having a longer discussion. But we haven’t figured out yet how to do that yet.

The best thing about Hot Docs is the audience; the audiences in Toronto are extraordinary. I had a film open there many years ago, (in 2002,) called ‘Blue Vinyl,’ and have loved Hot Docs ever since. So I’m really sad that I can’t be present with the audiences for this movie.

The reason why I wanted to have the film’s World Premiere there was so that I could learn how the movie plays with the audiences, and have the Q&As with them. I also wanted to launch one of the workshops that I’m developing, which are geared toward people who have older parents, and parents who had their children when they were older.

The workshops would also help people go through their stuff with their elders in advance of them dying. The workshops could show why doing that could bring joy, and be so much fun. It can also be useful in discussing end-of-life. So I’m waiting to hear about how we can do that.

I think the challenge of doing an online festival is the delayed gratification for the director and producing team. We don’t get to have that immediate response after the lights come up.

SY: Speaking of producing team, in addition to directing the film, you also served as a producer. What inspired you to also produce the documentary? How did you balance helming and producing the movie?

JH: My exerpience with my two core producers, Julie Parker Benello and Hilla Medalia, and our executive producers, who have been with us at different points along the way, was great. They were really hands-on and great resources, especially when they looked at all of our cuts.

We really developed this movie together. Like I mentioned earlier, for a long time, we were conceiving it as a series. But at a certain point, we were really struggling to reaise money, because it seemed as if the only way to do so was to know what our platform was. But a lot of the platforms didn’t want to say yes to the project until it was further along.

We seamlessly went from conceiving it as a series to reconceiving it as one feature that might have a series of shorts that dive deep into parts of the story that we wouldn’t have time to put in a normal feature. Doing that with Julie and Hilla was an extraordinary experience. I think it pushed them to be really mindful of their experiences with their own mothers…We had a really joyous time.

I was lucky that we were producing during a period of time in which we were able to have a lot of face-to-face forums, including at the Catalyst Forum at the Sundance Film Festival, and the forum that happens every September in New York. There’s nothing like going to pitching forums with producers who love your project, because every time you pitch, you get to talk about a different part of your movie. You can talk about the pitch of the commissioning editor and film festival directors, for instance.

We really got to develop the movie together. As producers, they were really collabortive, and incredibly generous with their beliefs. Like me, they really believed in the power of our editors, as well as our collaboration, and my collaboration with David Cohen, who I also wrote the narration with. It was through this deeply iterative process that we made this film.