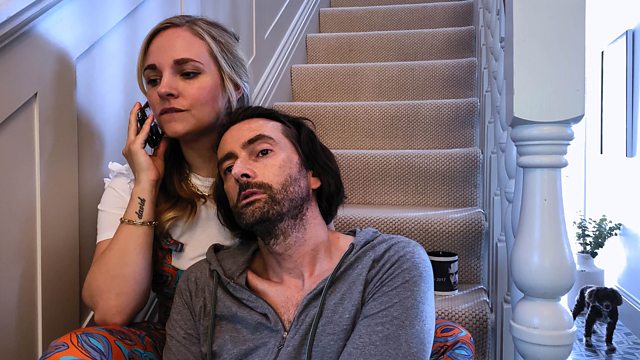 A scene from the British comedy television series, ‘Staged.’

The current Covid-19 pandemic is wreaking havoc on everyone’s professional lives, even such esteemed actors as Michael Sheen and David Tennant. The struggle to maintain public interest in the well-known British performers’ West End play, which was previously scheduled to run during the quarantine, is highlighted in the new comedy show, ‘Staged.’ With the help of the play’s director, who’s determined not to let the opportunity pass him by, the actors must fight back against a multitude of oppositions, including distractions, boredom, home-schooling and their own egos, in order for the play to go on.

The television series is currently airing on BBC One‘s channel on Filmon TV. (Note that the BBC One channel is only available for free to viewers in the UK, and international users who have a paid subscription.) The latest episode to air on Filmon can be streamed this morning at 6:05-6:25pm local time. It can be watched live, or recorded and watched at a later time.

Episode 4 of Series 1 of ‘Staged,’ which is titled ‘Bara Brith,’ was written and directed by Simon Evans, and contains strong language. It follows Michael and David (Sheen and Tennant) as they’re finding it hard to regain each other’s trust, so the show’s producer, Jo (Nina Sosanya), steps in to try and repair the damage. Meanwhile, Michael gets drawn deeper into the situation with his neighbor, while David is nervous about Georgia (Georgia Tennant) leaving to help her friend in labor.