Offering a bold, visionary depiction of a courageous, radical woman is a powerful journey for any filmmaker, especially a female director. French helmer, Marjane Satrapi is presenting an ambitious introspective of one of the co-developers of the theory of radioactivity, Marie Curie. The two-time Nobel Prize winning French physicist and chemist’s life is compellingly presented in the filmmaker’s new biographical movie, ”Radioactive.’

Lauren Redniss and Jack Thorne wrote the script for the drama, which offers an uncompromising look at the transformative, defining moments in the scientist’s professional and personal lives. International audiences can now witness Curie’s journey of discovering two new scientific elements-radium and polonium-and their lasting consequences that are still impacting the world in ‘Radioactive,’ which is being released today on Prime Video, courtesy of Amazon Studios.

‘Radioactive’ tells the story of pioneering scientist Marie Curie (Rosamund Pike) through her extraordinary life and her enduring legacies–the passionate partnerships and shining scientific breakthroughs, and the darker consequences that followed. In late 19th century Paris, Polish-born genius Marie Sklodowska met fellow scientist Pierre Curie (Sam Riley). The pair went on to fall in love, marry, raise two daughters, including Irène (Anya Taylor-Joy), and change the face of science forever, as their work proved the existence of what they called radioactivity. In 1903, the pair jointly won the Nobel Prize in Physics for their discovery, which made Marie the first woman to earn the esteemed prize.

After the death of her beloved Pierre from a tragic accident in 1906, Marie’s commitment to science remained strong. Her work discovering and explaining previously unknown radioactive elements went on to win her a second Nobel Prize. Despite her won, evidence was discovered and made public that her work in radioactivity could be used in warfare to kill millions of people, which led her to question everything that she held dear.

Satrapi generously took the time recently to talk about directing ‘Radioactive’ during an exclusive interview over the phone. Among other things, the filmmaker discussed that she cast Pike as Curie in part because the Oscar-nominated and Emmy Award-winning actress had a total understanding of the main character, and the duo envisioned the overall bio in a similar manner. The helmer also divulged that she felt it was important to examine both the scientist’s career and personal relationships because she was a very passionate person about all aspects of her life.

ShockYa (SY): You directed the new movie, ‘Radioactive.’ What was it about Marie Curie’s life, as well as the screenplay, that influenced you to helm the film?

So I’ve always known about her. But it’s one thing to know about her, and another to want to make a film about her. First, you have to have a good story. So I was sent the script by Jack Thorne, which to me, had a complete story. I had this script about this woman and her love story and work in science. I loved the way she was presented as being uncompromising about the things she cared about, so I knew right away that I wanted to direct this script.

SY: What was your research process like into Marie’s life once you signed on to helm the feature?

MS: Well, after reading the script, I had to make my own decisions about what I also wanted to add to the story. There were additional things that I discovered by looking through many different archives in France.

I also had the luck of meeting with Marie’s granddaughter (Hélène Langevin-Joliot), who’s the daughter of her daughter, Irène. That was a turning point, because she also gave us a lot of information.

SY: The drama stars Rosamund Pike as Marie, as well as Sam Riley as her husband, Pierre Curie. What was the casting process like for the biopic?

MS: I needed to find an actress who would be very focused, intelligent and intense, and also really understands, and is interested in, science. Not only is Rosamund Pike a great actress, she has all of these other qualities; she’s super smart and focused, and is extremely interested in science.

The most amazing thing is that she had a total understanding of the character, and the ways she and I imagined the film were quite similar. When you work with actors, it’s extremely important that you want to make the same film; if you don’t, the result is chaos.

Also, when you have someone like Rosamund, you have to find other actors who can match, and also have chemistry with, her. I always knew that Sam Riley was a great actor, after seeing him in such films as ‘Control’ and ‘On the Road.’ The chemistry between him and Rosamund was amazing, and he really showed that Pierre was amused by Marie. She became much more charming because of him…From there, we decided who we were going to cast alongside them.

SY: Once the actors were cast, what was the process like of working with them to build their characters’ arcs?

MS: Well, we talked about the characters and story, and I gave them material to read. But I don’t like to rehearse too much, and have the actors just repeat what they did during rehearsal while we’re filming. If you have the actors rehearse too many times, their performances become too mechanical, and it becomes difficult to get rid of that while you’re filming.

If you have great actors…you have to trust that they’ll become the characters, and their relationship with their characters are emotional. I also had to be open to their ideas and think that they would be interesting, and let them give them a try…With actors like Rosamund and Sam, it was important to give them the space and freedom they needed to explore. I think that’s the best way to work; it’s important that we have mutual trust and respect.

SY: While Marie and Pierre garnered international attention for their scientific discoveries, her personal life was also met with complication and criticism. Why was it important to you to examine her personal life into the narrative?

MS: Well, behind all the science, they were still human beings who were madly in love with each other. So it was important to show that, and how their life together was made. In real life, their lives were made of both their science and love. They were both very passionate people, and when you’re passionate, you’re passionate about all aspects of your life. So including that part of their lives came naturally to us.

SY: ‘Radioactive’ premiered as the Closing Night Gala at last year’s Toronto International Film Festival. What was the experience of bringing the drama to the festival?

MS: It was one of the best moments, and rewarding experiences, for us. When you shoot a film, and get to show it in a big theater, you can connect with the audience, and see their response. So I was extremely happy to bring it to the festival.

SY: Amazon Studios (is) releas(ing) the movie on Prime Video (today). Why do you feel the digital distribution is beneficial for a movie like this one?

MS: I initially thought the movie would play in theaters. But with the current situation with the pandemic around the world, I’m happy that I was still able to finish the film and have it come out, and still have people see it. So it’s a very good moment, and I’m very thankful for this opportunity. 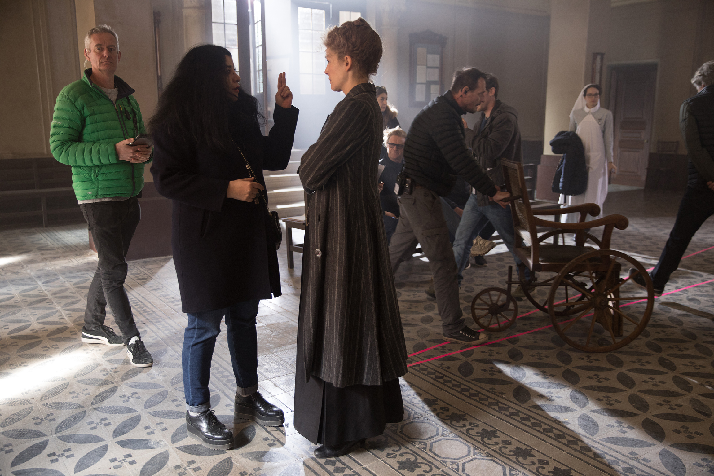