Finding the courage to lead in the face of the impossible is a vital theme in front of, and behind, the camera of the new fantasy television series, ‘Cursed.’ The female-driven drama, which is now playing to critical acclaim and commercial success on Netflix, is a coming-of-age story whose themes are reflective to what’s currently happening in the real world, including the obliteration of the natural world, religious terror and senseless war. Thriving television executive, Zetna Fuentes is introducing audiences to the empowering adventure show that’s based on last fall’s New York Times bestselling illustrated novel of the same name by Frank Miller and Tom Wheeler.

Fuentes has established herself as one of Hollywood’s most in-demand directors, as she continuously helms episodes of such notable and award-winning series as ‘Ray Donovan,’ ‘The Deuce,’ ‘Shameless,’ ‘This is Us,’ ‘Grey’s Anatomy’ and ‘Scandal.’ She most recently spent over a year directing and executive producing the pilot and sophomore episodes of ‘Cursed,’ which are titled ‘Nimue’ and ‘Cursed,’ respectively, and were both written by Tom Wheeler.

‘Cursed’ is a re-imagination of the Arthurian legend, and told through the eyes of Nimue (Katherine Langford), a young woman with a mysterious gift who’s destined to become the powerful-albeit tragic-Lady of the Lake. After her mother’s death, she finds an unexpected partner in a humble mercenary, Arthur (Devon Terrell), in a quest to find Merlin (Gustaf Skarsgård), and deliver an ancient sword. Over the course of her journey, Nimue will become a symbol of courage and rebellion against the terrifying Red Paladins and their complicit King Uther (Sebastian Armesto).

Fuentes generously took the time recently to talk about directing and producing ‘Cursed’ during an exclusive video interview over Zoom. Among other things, the helmer-executive producer discussed working with Miller and Wheeler to bringing the cinematic sci-fi show to the screen, and collaborating with Langford on her fearless portrayal of Nimue.

Watch the official trailer for ‘Cursed’ above, and our exclusive interview with Fuentes below. 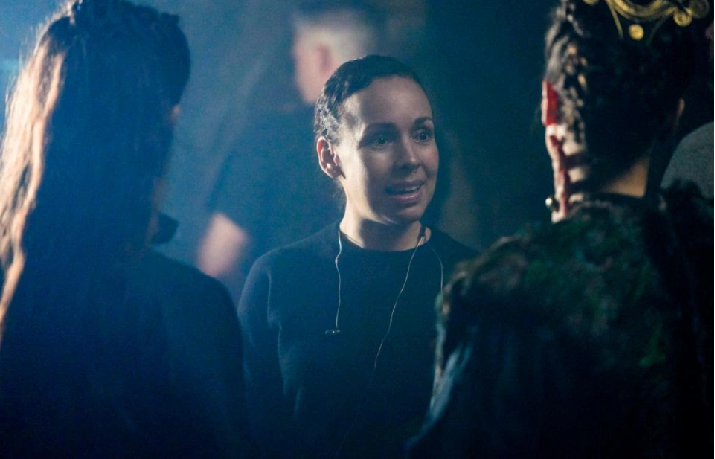