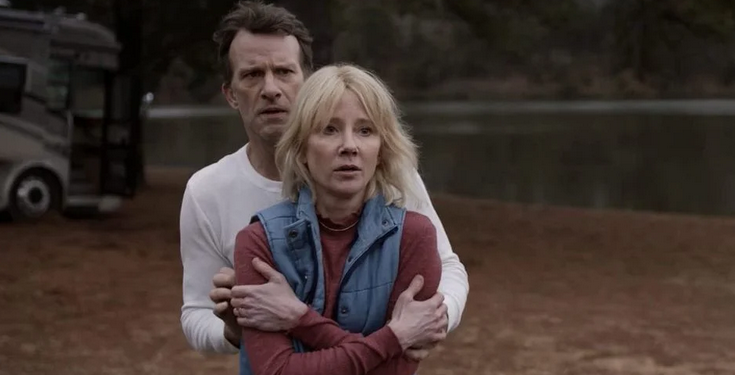 Grief and sorrow can often serve as powerful inspirations for people to take drastic chances in their lives. That’s certainly the case for the two married protagonists in the new psychological thriller, ‘The Vanished,’ which intensely explores the radical actions they’re willing to take when their young daughter mysteriously disappears without a trace. Anne Heche and Thomas Jane portray the main characters in the mystery feature, who are so shaken up by the dire situation that abruptly destroys their happy life together that they’re willing to do whatever it takes to get their child back safely.

Saban Films is releasing the drama today in select theaters, as well as On Digital and On Demand. The movie was written and directed by Peter Facinelli, who also stars in the thriller.

‘The Vanished’ follows the Michaelson family, which includes husband and wife, Wendy and Paul (Heche and Jane), and their 10-year-old daughter, Taylor (Kk Heim), as they head to the Alabama woods to spend the Thanksgiving weekend camping in their RV. Not long after the trio arrives at the RV camp, the young girl mysteriously disappears, much to her parents’ surprise, anguish and dismay.

Wendy and Paul quickly report their daughter as being missing to the local sheriff, Baker (Jason Patric), and his deputy, Rakes (Facinelli). The officers lead their police force in the search for Taylor, which includes questioning the lakeside campground’s borderline hostile proprietor, Tom (John D. Hickman), and his groundskeeper, Justin (Alex Haydon), who appears more interested in nursing his drug addiction than helping find the missing young girl. Tension also arises between the parents when Wendy begins to suspect that her husband’s attracted to Miranda (Aleksei Archer), the young woman who’s staying in the camper next to them with her husband, Eric (Kristopher Wente).

While Sheriff Baker suggests that Wendy and Paul not participate in the officers’ search of the area, in order to protect their own safety, the spouses still decide to sneak out to conduct their investigation. When several terrible accidents then occur in the area, the sheriff begins to suspect that he may be contending with something far more serious than a missing persons case.

Heche generously took the time recently to talk about starring in ‘The Vanished’ during an exclusive interview over the phone. Among other things, the actress discussed that she was drawn to playing Wendy in the film in part because Facinelli’s script captivated her from the first time she read it, as he created several twists that audiences may not initially expect. The performer also shared that while she hasn’t experience the same level of grief that her character did, she was still able to relate to Wendy’s feelings of mourning, as everyone can understand the sorrow that accompanies the loss of a family member.

The conversation began with Heche explaining what drew her to play Wendy in the movie, and how she became attached to ‘The Vanished.’ “It always being with the story, and what the script’s about. I had no idea what to expect, because I don’t like anyone to tell me about a project before I read it,” she admitted. “I don’t want to know who’s also acting in it; I just want to go in as an audience (member), if I can, and start from there. If (the screenplay) captivates me, and I want to turn the pages, then that to me is a good story,” she added with a laugh.

“Peter wrote and directed it, and I was amazed by how gripping each turn was. I was amazed by how he was able to pull (this story) off, especially with the twists, five or six times in a row. Every single time he took a turn with the characters, he makes you realize that you don’t know everything, and everything you think you know about the story” isn’t necessarily true, the actress explained.

“This movie’s really about perspective. This couple, from one point-of-view, is going through one story. But by the time you get to the end of the movie, you realize they have a completely different truth,” Heche revealed. “So for me to craft a character, whose every word has two different meanings,” was a challenge that she fully embraced.

“Everything that comes out of my mouth needs to be equally truthful (from every perspective). That way, when you find out what’s really going on at the end, you understand that I was always telling my truth. But from an outside perspective, of course it looks like a different thing, and I found that to be very exciting,” the performer continued.

“We easily take information from other people, and don’t ask questions. We make judgements based on a compelling argument that other people make, and don’t ask enough questions about what the truth is,” Heche pointed out. “I found that to be a really fun thing to portray.”

Wendy and Paul are pushed to their limits after Taylor disappears from their camp site. The actress then delved into what the process of developing her character’s grief was like during the production.

“The thing about mourning and loss is that you don’t have to do much research if you’ve experienced it on different levels, and I think we all have on different levels. This character, who loses her child, required a deep dive into the sorrow that I’ve been through in my life,” Heche shared. “Unfortunately, there have been multiple deaths in my family. So in order to pull off playing this role, I couldn’t hold back how deep that loss goes.

“So the trick of this research was going as deep as I could into that sorrow of loss. I wanted to show people that if they’re hurt, they’d still be able to come out on the other side,” the performer noted. “This movie’s not only a thriller, but also an exploration into if love can really survive a crisis, and I think we’re all going through that on some level right now. I think we need stories that tell us no matter how dark it gets, there is a possibility that we can get to the other side.”

Following up on the fact that Facinelli wrote, directed and starred in ‘The Vanished,’ Heche further delved into what her experience collaborating with him was like on the set. “It’s an interesting thing where stories come from. This script came from an experience that Peter had when he was camping in an RV with (one of his thre) daughters), and how deeply it would hurt if something like that ever happened to him,” she shared.

Wendy’s “one of the most intimate characters that I’ve ever played. (Creating the character) demanded intimacy between Thomas, Peter and me…We were all encouraging each other to go as deep as we could, and that requires a very specific type of director in ways that weren’t comfortable,” the actress revealed.

Following up on the experience of working with the rest of the cast, particularly Jane, Heche divulged that she “had a perspective on the script that we could be telling two stories in a way that I’ve never heard another actor talk about film before. This story had the potential to tell two completely different stories with the same language.

“To do that, you need 100 percent commitment from your partner, because each line is a puzzle that has two completely different meanings. Thomas and I loved that. He was fascinated with being able to pull that off,” the performer further explained.

“After working on ‘Hung’ together, we wanted to get back to having that chemistry on screen, which is why we did this movie together. It was really a privilege to do that,” Heche stated. She also revealed that they actually started dating in real life after production on the feature ended, after they starred on the Emmy Award-nominated HBO comedy-drama series together a decade ago.

The actress also expressed her gratitude for being able to shoot ‘The Vanished’ on location, as the majority of the story takes place in the RV campsite where Taylor disappears. “I like being on location, but on this location, there weren’t any trailers” or additional amenities that casts and crews receive on bigger budget studio films. “Our trailer became the picnic table next to the RV where you first meet us (in the thriller). It was always raining, so we’d just sit under the umbrella and look at the lake…We also became very familiar with the forest.”

Heche added that “There was actually a day when I was rehearsing with Thomas next to a garbage dump. We had no privacy; our holding area was in the RV,” she revealed. “This was the least private place I’ve ever worked. When Thomas and I would film in the RV, there would be at least seven to ten crew members with us in there.

“But at the same time, we were trying to be completely raw and exposed in our emotions. Somehow, we kept saying that the (experience) was happening for a reason,” the performer also shared.

Not only did the location where ‘The Vanished’ was shot helped Heche connect to Wendy, but so did the way the actress developed the physicality for the character. “These two know something that nobody else knows. So if the audience goes back and watches the movie from the beginning again, they can recognize the second perspective. They can also realize that each scene was (physically) articulated” to represent the secrets that the spouses are trying to hide from the outside world.

“As we began, I said to Thomas, ‘When we arrive (to the campground) on the RV, Wendy and Paul have super joy. But when you watch the film, you realize that the couple is also holding onto a secret.'” She also revealed that “Thomas and I are very similar actors. So I told him that if you go back, you can sense that from the very beginning, there’s something that’s going on with them that you don’t immediately recognize, because you’re being told one perspective.

“But if you go through every scene, there are clues (to their secret) through how Wendy’s behaving, especially through her physicality. I like to be secretive about things, but I also like to be crafty. So if you go back, you can watch her body and sense that she’s living a lie, which is interesting,” Heche concluded.