The most tantalizing genre films not only explore the lasting damaging effects of victims being physically attacked, but also being emotionally manipulated by the people they least expect to hurt them. That’s certainly the case for actress Lee Marshall’s shy, awkward protagonist in the new psychological thriller, ‘Bleed with Me,’ which explores the intersections of admiration, compulsion and obsession through chilling body-horror.

‘Bleed with Me,’ which marks the feature film writing, directorial and producing debuts of Amelia Moses, mixes tenderness and violence in an investigation of female intimacy, and the dangerous codependency that arises from that close bond. The story also captures the vulnerability and discomfort between female friends as it explores issues related to self-harm and social isolation. As the relationship between the two female lead characters, who are played by Marshall and actress Lauren Beatty, blur the lines of sexuality and violence, they also become increasingly anxious, which leads them on emotional journeys that lead to their states of physical and spiritual annihilation.

The drama had its world premiere last Wednesday, August 26, as part of the Underground section at the 2020 Fantasia International Film Festival. ‘Bleed with Me’ will have its second screening tomorrow, September 1 at 3pm EST. (In response to the current worldwide COVID-19 pandemic, the festival, which has normally been held in person in Canada since its founding in 1996, is holding its entire edition digitally this year.) Tickets for the follow-up show are are available on the movie’s page on Fantasia’s official website, and will be preceded by the short film, ‘Don’t Text Back,’ which was co-written and co-directed by ‘Bleed with Me’s producer, Mariel Sharp.

‘Bleed with Me’ follows Rowan (Marshall, who also served as a producer), a self-destructive and vulnerable outsider, as she’s initially thrilled when the seemingly perfect Emily (Beatty) invites her on a winter getaway to an intimate, isolated cabin in the woods. However, boundaries and relationships soon start to collapse, as Rowan struggles to integrate herself on a weekend getaway with Emily and her unfriendly boyfriend, Brendan (Aris Tyros).

Feeling like a third wheel, Rowan drinks to calm her nerves, after which she begins to witness nightmarish late-night visions that make her feel increasingly unwelcome and unstable. Trust between the two new friends also turns into paranoia when Rowan wakes up with mysterious incisions on her arm, which leaves her convinced that Emily is stealing her blood.

Moses, Marshall and Beatty generously took the time on Saturday afternoon to talk about writing, directing, producing and starring in ‘Bleed with Me’ during an exclusive video interview over Zoom. Among other things, the scribe-helmer and actresses discussed why they feel it’s important to have a female-led cast and crew while making a genre movie like ‘Bleed with Me,’ the experience of shooting the thriller in an isolated cabin in the woods in Quebec and their happiness over having the drama premiere at Fantasia, which is based in their hometown of Montreal.

Watch our exclusive video interview with Moses, Marshall and Beatty above, and the trailer for ‘Bleed with Me’ below.

Bleed With Me – FESTIVAL TRAILER from Amelia Moses on Vimeo. 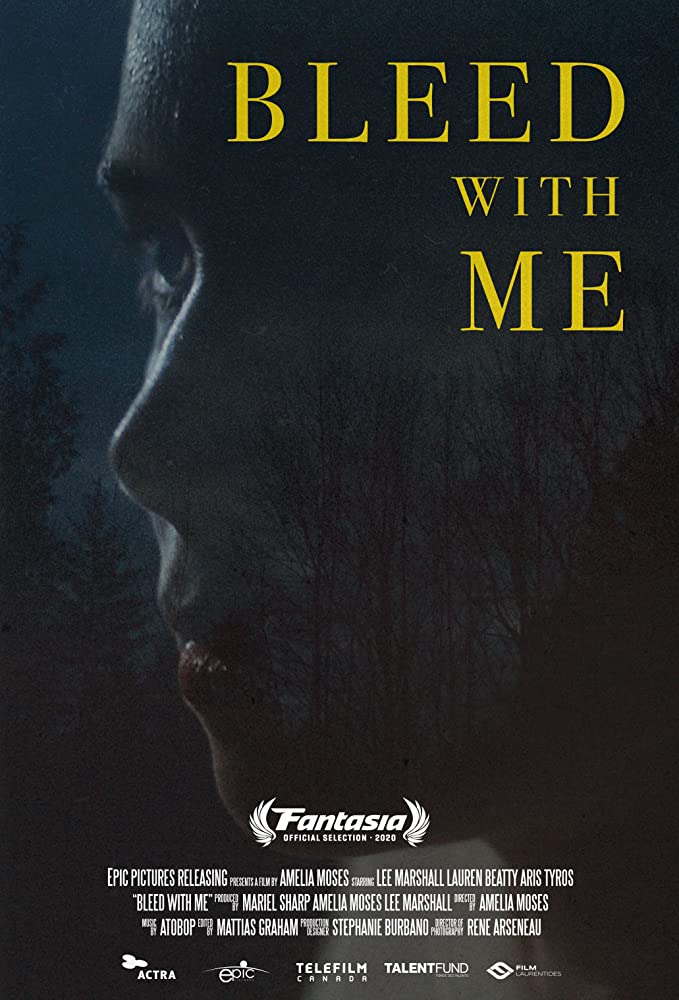 ShockYa exclusively interviews writer-director-producer Amelia Moses, actress-producer Lee Marshall and actress Lauren Beatty about their psychological horror thriller, 'Bleed with Me,' which had its World Premiere at the 2020 Fantasia International Film Festival.