Sometimes it takes a dark, strange and bewildering journey, both physically and emotionally, for people to become ready and able to confront their traumatic pasts, and embrace the new prospects of their futures. That’s certainly the case for the two lost protagonists, Mary and John, in the new drama, ‘Fugitive Dreams.’

In the allegorical road film, which explores themes of homelessness, mental health and addiction, the two new friends embark across a dreamscape America. Their dark trip bonds them in compassion and love, as they both search for ways to heal.

Shot with a blend of color and black and white photography, ‘Fugitive Dreams’ rich visuals create an unforgettable atmosphere that evokes the all-star character ensembles of Hollywood’s Golden Age. Also driven by its characters’ resiliency, the movie is a bittersweet, but equally integral, portrait of America’s unsung folk heroes.

Veteran theater helmer, Jason Neulander made his feature film writing, directorial and producing debuts on ‘Fugitive Dreams.’ He adapted the drama from the play, ‘Fugitive Pieces,’ which was penned by Caridad Svich, who also co-scribed the movie’s script with him. The screen adaptation had its World Premiere this past Monday, August 31, as part of the Underground section at the 2020 Fantasia International Film Festival.

John brings a certain innocence to their relationship, while Mary brings a hardened practicality. Mary’s destination is anywhere but here, while John’s is a place that only exists in his imagination. Along the way they meet a series of figures who are deemed disposable by culture. These encounters challenge and torment John and Mary as they journey through a landscape that offers little solace for those living the most precarious of lives.

The final leg of their wanderings brings them to the place of John’s dreams, where the gray of the real world melts into color, and the troubles of their afflictions dissolve away. Over the course of their story, John and Mary come to understand that the home they seek is not a particular place within their country, but instead with each another.

Neulander generously took the time recently to talk about co-writing, directing, producing ‘Fugitive Dreams’ during an exclusive interview over the phone. Among other things, the scribe-helmer-producer discussed that was drawn in part to adapt ‘Fugitive Pieces’ for the screen as his first feature, as it’s one of the plays that he’s the most proud of directing. He also mentioned that he’s thrilled that ‘Fugitive Dreams’ had its virtual world premiere during this summer’s Fantasia, as the festival’s staff has been supportive of his vision in the drama..

The conversation began with Neulander explaining what inspired him to adapt the play into the movie with Caridad, and how they approached writing the screenplay for the film together. “‘Fugitive Dreams’ was actually adapted from a play called ‘Fugitive Pieces’ that I directed many years ago, and was written by Caridad Svich. My background is mostly in theater, and ‘Fugitive Dreams’ is my first feature film.

“‘Fugitive Pieces’ was one of the plays that I was the most proud of that I directed,” the screenwriter shared. “I was looking for material to bring to the screen for my first feature when I found myself overwhelmed by the anger that was happening on social media during the 2016 presidential election. I realized that for me, as an artist, I needed to bring something into the world that was about love.

“So I looked at a bunch of different possibilities for what that would be, in terms of my first feature, and re-read the script for ‘Fugitive Pieces,'” Neulander also divulged. “I found myself crying at the end of it. I immediately called Caridad and asked her if she would be okay with me adapting it into a screenplay, and she immediately said yes.”

Adapting the play into the film’s script “took about a year. The first pass on the adaptation actually happened very quickly-in about three weeks-which said to me that I was on the right track. From there, there was quite a bit of revisions that happened in the script. But at its core, I knew this was the thing that I felt compelled to do,” the scribe added.

Neulander then delved into how in addition to writing the movie’s script, he also served as a producer. He explained why he decided to also produce the drama. “For me, there was never a question that the film would get made. I did the vast majority of the fundraising myself to get it made, because I have a lot of fundraising experience from the theater company I ran for many years.”

Production on ‘Fugitive Dreams’ was originally scheduled to begin “during the summer of 2017, but we were struggling with the casting,” the filmmaker revealed. “So we pushed the (start date) to January 2018.”

Following up on the casting process for the drama, Neulander shared that “Right out the gate, when I first decided that I wanted to adapt the play into the film, I called April Matthis and asked her if she was willing to play Mary,” he noted. “April is a theater actress who’s based in New York. I worked with her 20 years ago when she lived in Texas, which is where I’m from, before she moved to New York. We stayed friends over the years, and I think she’s an incredible actress.

“The funny thing is that when I called her, I completely forgot that I had gotten in touch with her about being in the play back in the early 2000s, but she remembered. But I clearly had her in mind to star in this project since before I even knew I was doing this film, by about 15 years,” the helmer revealed.

“The other key roles happened much closer to the shoot…For the role of John, for a brief window, we initially had a well-known star attached, but we ultimately couldn’t work it out. So we were left without our lead about a month before we began shooting,” Neulander also divulged. “But April then ended up recommending Robbie Tann, and I auditioned him I think by a FaceTime call. He was amazing, and perfect for the role…I then called him and let him know that he was cast three days before our three-day rehearsal started for the shoot.”

The visual concept for ‘Fugitve Dreams’ was also an important element of adapting Mary and John’s story from the stage to the screen. The concept “came pretty early to me in the process. Key inspirations were some movies from the Golden Age of cinema, which were shown in black-and-white,” the filmmaker revealed.

“When I was interviewing cinematographers, Peter Simonite came in so prepared for our meeting, and completely understood what I was going for,” the director exclaimed. The director of photography understood that the helmer “wasn’t just inspired by the movies from the 1930s and ’40s, but also contemporary cinema, including by filmmakers like Jim Jarmusch. That first meeting was a meeting of minds.” Once production on ‘Fugitive Dreams’ began, “I felt like he just took images from my brain, and put them into the camera…He shot the movie that I imagined when I was writing the script; it was awesome.”

Neulander then expressed his gratitude over having his debut feature have its virtual world premiere at Fantasia. “Obviously, it’s not the situation we would have asked for if we could re-write COVID, and make it go away. But with that said, working with the folks at Fantasia has been nothing but awesome. Every staff person there who we’ve interacted with has been so incredibly enthusiastic about, and supportive of, the film,” he disclosed.

“From the programmers to the technical, social media and press teams, everyone has been so great to work with. there’s been such great communication and support that it’s almost overcome the feeling of sadness that we can’t have a live audience,” the filmmaker concluded. 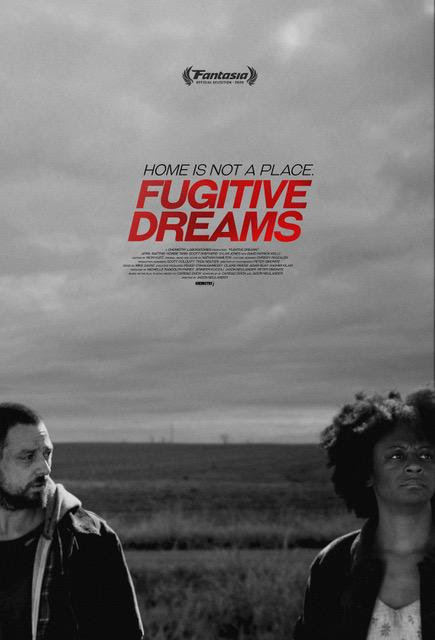