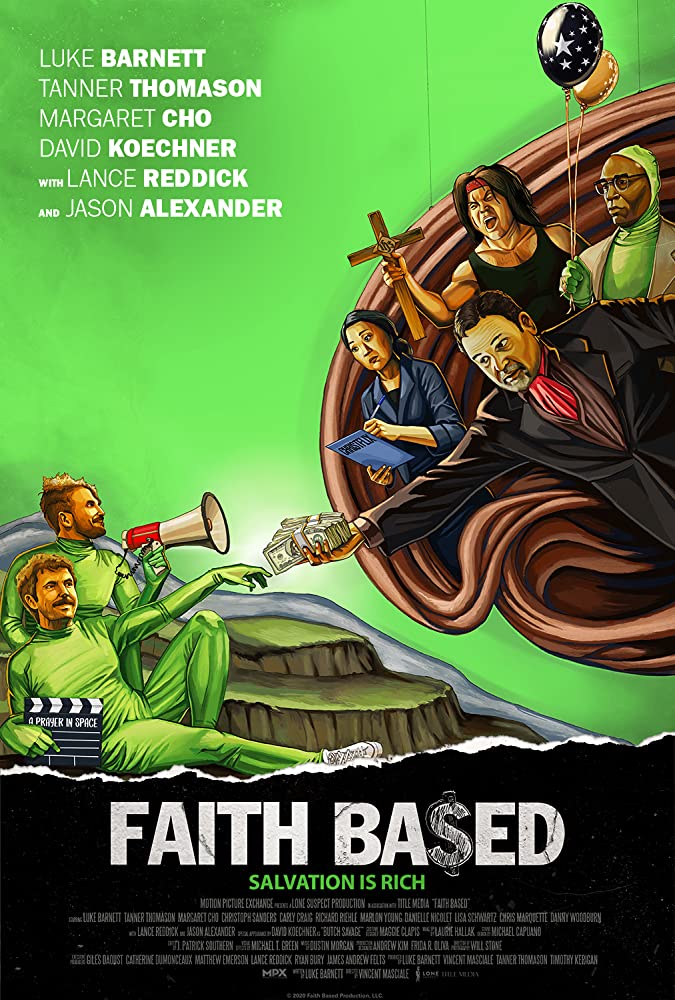 The poster for director-producer Vincent Masciale’s comedy, ‘Faith Based.’

Working with friends to make a movie can sometimes create resounding critical and financial success, while other times, the collaboration is just a self-indulgent and futile attempt to gain fame. The filmmaking trio behind the new religious-based comedy satire, ‘Faith Based,’ including Vincent Masciale, Luke Barnett and Tanner Thomason, is part of the former group, while the characters they play in the feature are the latter.

Gravitas Ventures will distribute ‘Faith Based’ on VOD and all digital platforms, including iTunes and Amazon, this Friday, October 9. The official release comes after the movie received positive reviews on the film festival circuit.

Masciale directed ‘Faith Based,’ which was written by Barnett, who stars as one of the main characters, alongside Thomason. The trio, who also served as producers on the movie, previously worked together on the the 2016 horror comedy, ‘Fear, Inc.’

‘Faith Based’ follows two slacker friends who decide to follow their misguided idea of producing a faith-based film, as they’re driven by financially opportunistic motivations. While they have limited familiarity with Christianity, they feel that they can still make money, as they’ve noted that every low budget Christian movie that star ’90’s television actors makes millions of dollars.

Luke (Barnett), who’s in his early 30s, is still fighting off the need to accept his adulthood. Living in a shard rental home in the Los Angeles suburb of Reseda with his childhood best friend, Tanner (Thomason), who also refuses to let go of his lifelong immaturity. Luke, who supplements his income by selling weight-loss teas, is a big fan of the company’s CEO, Nicky Steele (Jason Alexander), who lures people like Luke in with promises of wealth and power.

Luke’s dad, Mike (Lance Reddick), the pastor of a local church, isn’t impressed by his son’s lifestyle, and wants him to get a real job. Mike wishes his son, who he adopted with his late wife, were more like his overachieving younger siblings. Instead, Mike’s talk about the profitability and success of faith-based movies inspires Luke’s next scheme to make money quickly: make a Christian film titled ‘A Prayer in Space,’ which will make millions in ticket sales. While he doesn’t have any filmmaking experience and isn’t religious, he feels that if he can persuade Tanner to help him, they might have a chance to become rich quickly.

Masciale, Barnett and Thomason generously took the time recently to talk about writing, directing, producing and starring in ‘Faith Based’ during an exclusive video interview over Zoom. Among other things, the filmmakers discussed what inspired Barnett to pen the screenplay, and how his work on the script influence his acting duties on the set. Masciale also spoke about why he decided to helm the movie, and what his overall directorial style was like on the set. The trio also delved into what the process of working on creating the humor and satire for the comedy was also like on the set.

Watch our exclusive video interview with Masciale, Barnett and Thomason above, and the official trailer for ‘Faith Based’ below.