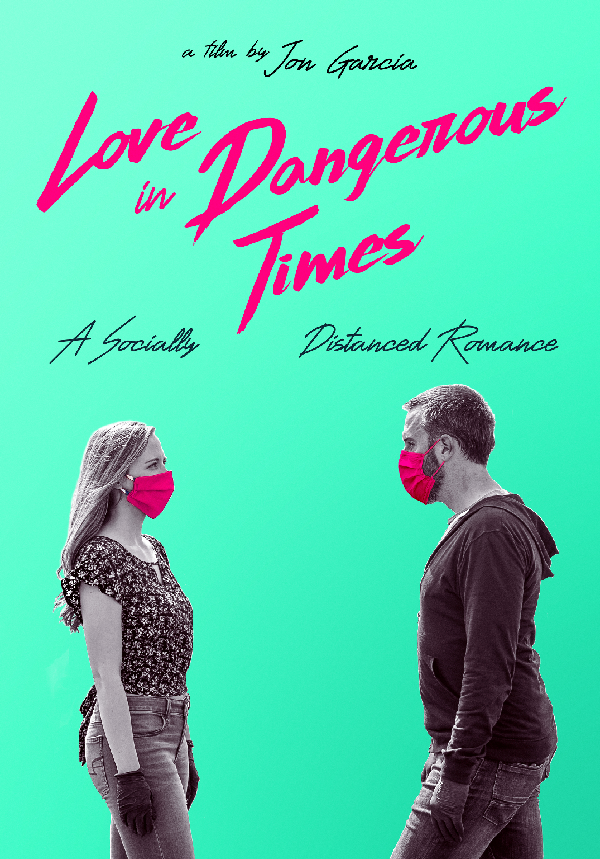 Distance love is currently proving to be easier than face-to-face love, which comes with obvious distractions that are linked to touch, for actor Ian Stout and actress Tiffany Groben in the upcoming film, ‘Love in Dangerous Times.’ In honor of Dark Star Pictures releasing the romantic comedy-drama on November 3 on all major VOD platforms, including iTunes, Amazon, Google Play, YouTube and Vudu, ShockYa is exclusively premiering the trailer from the feature.

‘Love in Dangerous Times’ was shot, and is set, during the current COVID-19 pandemic. The movie follows the virus as it spreads quickly throughout the world, during which Jason (Stout) remains ambivalent about its danger. Unable to travel and be with his family members, who are on the other side of the country, he decides to spend the pandemic working on a play that resembles his life and current circumstances.

As writers-block and loneliness ensue, Jason begins to turn to online dating to find a friend for the apocalypse, during which he meets Sorrel (Groben). With the infection rate worsening and defeat looming, the two begin to lean on one another for support, while they try to make sense of the times they live in.

‘Love In Dangerous Times’ was directed by Jon Garcia, who also co-wrote the script with Stout. The filmmaking duo began working on the quarantine-themed romantic comedy in February, when it was becoming clear that much of the world was in a panic. With the threat of physical and financial crisis, they began to collaborate on the movie, which delves into the complexity of the diverse emotions that many people are experiencing as a result of COVID-19.

The casting process for ‘Love in Dangerous Times’ was simple, as Garcia felt it was easy to cast performers he’d worked with before. Groben was a newcomer to the group, however, and integrated herself seamlessly into the project. In addition to Stout and Groben, the feature also stars Marian Mendez, Bruce Jennings, Jimmy Garcia, Cecily Overman and Liz Kohl.

Once production on the comedy-drama began, safety was a main concern, as universal filming protocols had not yet been put in place for shooting during a pandemic. So Garcia implemented an open communication about how best to prevent risk of exposure to the Coronavirus before, during and after filming.

The shooting process had to move quickly, as it was important to the cast and crew to capture the feeling of living through a pandemic in real time. Once the script was completed, the focal crew and cast quarantined for two weeks. Then, as production began in mid-April, they utilized masks, gloves and hand sanitizer donated by friends and family, until filming wrapped in mid-May.

In addition to directing ‘Love in Dangerous Times,’ Garcia also operated the camera, while Steven Gardner did most of the other crew work. The movie was filmed mostly in an apartment in NW Portland, with the supporting actors mainly recording their performances via video chat or phone.

The romantic comedy was created on a shoestring budget of $2,000, with many people donating their time to create something relevant and relatable. The process was a way for the creators to keep their sanity, as the threat of the unknown loomed throughout the hearts and minds of people all over the world.