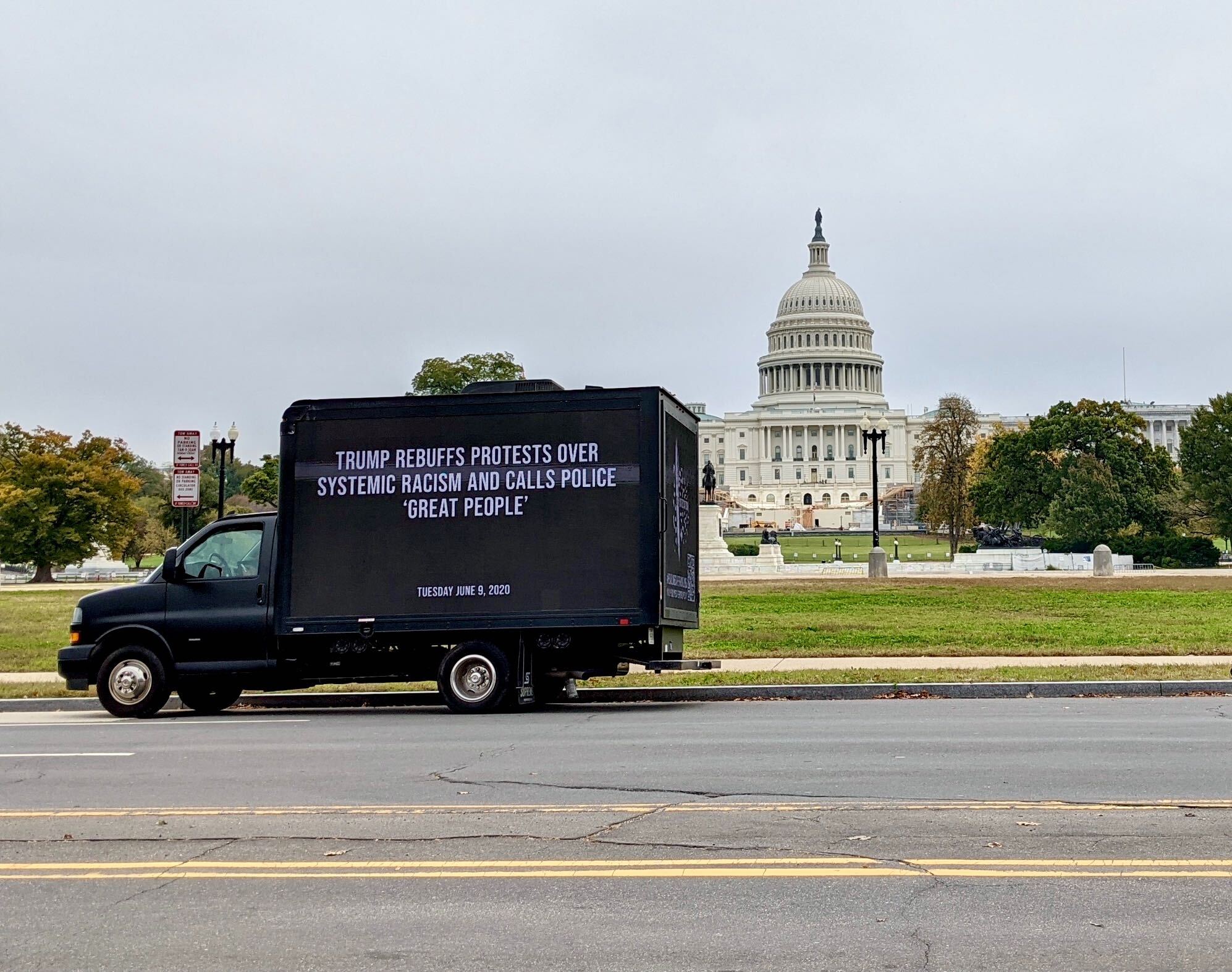 During the current uncertain times throughout the United States, from the deadly COVID-19 pandemic to the highly debated presidential election, Americans can find some understanding of what’s happening around them this week with ‘Headlines Are Frontlines.’ The new multimedia installation was created by artist and filmmaker Smriti Keshari, who collaborated with acclaimed film music producer and composer, Marius de Vries, as a way to bring art to the public during a time when many public places are still closed, due to the pandemic.

In honor of the launch of ‘Headlines Are Frontlines’ this week, ShockYa is premiering an exclusive photo of one the trucks that’s featured in the installation at the U.S. Capitol. The headline that’s featured on the side of the truck states: “Trump Rebuffs Protests Over Systemic Racism and Calls Police ‘Great People.'”

The truck in the photo is just one of several moving vehicles that’s being used in the installation, which is highlighting the headlines that have featured American President Donald Trump throughout his leadership over the past four years. The sides of the trucks feature 12-foot screens, and the headlines they’re posting are set to music. The trucks are traveling in 15 cities across the U.S., including seven battleground counties, until tomorrow, October 28.

The score for the installation is based on a one-minute performance of the Star-Spangled Banner, which is stretched and distorted over the length of the featured headlines. The music is helping to deliver the somber sobriety of the reality that has accompanied Trump’s presidency.

“The speed of the news cycle has created a form of censorship through noise,” said Keshari. “When you see these headlines in succession, one after another, it reminds us of the haunting and addictive impact of the newsroom on America’s nervous system.” She hopes that her work will “serve as a meditation on a rapidly changing newsroom, one sewn with chaos and confusion by Donald Trump, the media’s challenge in covering him and the public’s struggle to keep up.”

The artwork for ‘Headlines Are Frontlines,’ which was produced by Hazel Gibson and Margaret Aery, was created by Stanley Donwood and The Kingdom of Ludd. For more information on the installation, visit its official website, as well as its Instagram and Twitter pages.

Summary
Event
​Headlines are Frontlines
Starting on
October 26, 2020
Ending on
October 28, 2020
Description
Artist-filmmaker Smriti Keshari has created the new multimedia installation, 'Headlines are Frontlines,' , which is highlighting the headlines that have featured President Donald Trump throughout his leadership over the past four years on the sides of trucks that are traveling throughout 15 American cities.