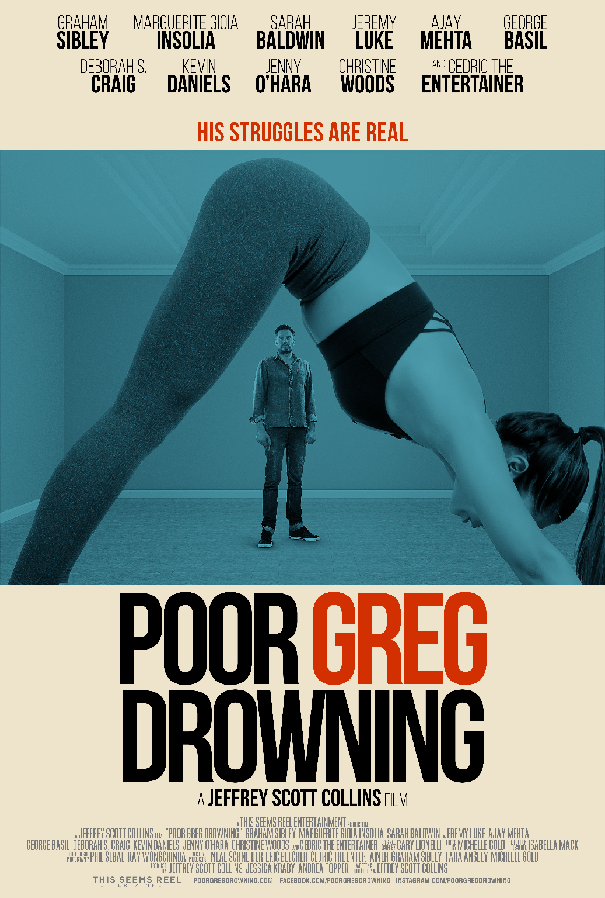 We are introduced to an incurable romantic in his mid-thirties, who is having trouble in  finding stability in his professional and sentimental life. Poor Greg Drowning is a modern fairytale, and thus it begins: “Once upon a time, a poor aspiring writer was drowning in heartache.” Greg is depressed, unemployed and heartbroken by his previous break-up…until Peyton comes into his life.

The story of this unfortunate soul is the brainchild of writer-director-producer, Jeffrey Scott Collins. Raised in upstate New York, Jeff graduated from Boston College, and has taken film classes at NYU. He also completed the Summer Film Institute at UCLA when he made the move out to Los Angeles, where he currently resides. Collins began his film and TV career in finance, before transitioning into creative services at HBO. He then worked under the the tutelage of three writer-directors on their features as a Director’s Assistant, including John Hamburg, Luke Greenfield, and Victor Levin. Furthermore, Jeff has worked in feature development at Hasbro/Allspark Studios, and now runs Film & TV for Jake Stein’s new company, Scondo Productions, where he is developing and producing numerous film and TV projects.

In this exclusive interview with writer-director Jeffrey Scott Collins we find out about his five year endeavor in bringing Poor Greg Drowning to the screen:

What inspired you for the character of 35-year-old-socially-awkward Greg?

I just looked in the mirror and that was that… just kidding. It was two fold. The scene of a disgruntled heartbroken individual spilling their pain out onto a helpless stranger just popped into my head and I thought it would make for a funny short film. Then, when I was thinking of who could play the role, I immediately thought of my good buddy and fantastic actor, Graham Sibley. Seeing Graham in the role really helped shape the character, as did drawing from my past (particularly, one difficult period in my life that I went through many lifetimes ago). We always say this, but if Graham and I had a baby together, it would not only be incredibly charming and handsome (obviously), but it would also be Greg (but the exaggerated version).

This film stems out of your short ‘Glimpses of Greg’ and the eponymous series. What type of research did you make to expand, in your feature script, the phenomenon of love addiction and the consequent mental health issues related to it?

That’s a great question. I didn’t know love addiction was a real condition until I moved to Los Angeles and met a few people who suffered from it. So when we expanded the short into a full feature, I read more about the topic and talked with people who attended love addiction anonymous meetings. I tried to intertwine the addiction into Greg’s character in a grounded and authentic way, while simultaneously utilizing it as a catalyst to enhance the comedy. But the depression Greg goes through I was able to draw from myself as I suffered from two periods of depression in my life.

How did your background in finance help you for the making of this film, and in general in your work as producer?

To be honest, it was crucial. Making a feature film is essentially the same thing as starting your own business. You are raising money, keeping a budget, hiring employees, etc. So understanding the business side of filmmaking is a necessity as a producer, but is also hugely beneficial as a writer/director. We shot the entire project in about 14 days. When we received financing to finish it as a feature, we shot 55 pages in six days. Needless to say, we didn’t have a lot of time (and thus an aggressive amount of wine and tequila was a must). Understanding that, I chose to shoot simple static shots with coverage as opposed to flexing fancy camera movements in order to save time, and focused more on the comedy and the performances and allowing time for improvisation, as opposed to shooting a complex looking film. I also thought the static simple look complimented the awkward comedy, and aesthetically portrayed where Greg was in his life.

Animation is present in this live action, how dear is this technique to you, and how was your creative process with animator Steven Kamakanda?

I love animation with adult humor, and thought the animations in PGD worked really well as transitional pieces. They were a fluid and slowly evolving process in this film, and working with Steven was a dream. He is super talented and nailed the comedy of the film. Originally, the opening credit sequence was going to be gorgeous drone footage of Los Angeles that our associate producer, Jackson Belcher, shot.

But then we decided we wanted a credit sequence that better captured the feel of the movie. When this project began as a short film, I created a stick figure animation with a piece of paper and a magic marker (fancy, I know) for the poster of the short, as well as the opening title animation. And I loved the idea of Greg as a sample animated stick figure. So I met with Steven (by sheer luck) and the stick figure slowly evolved into the awesome credit sequence animation that he created which now exists in the film.

The other animations in the film were originally written out text in typewriter effect that Graham (as Greg) was going to narrate over a black screen. But they weren’t quite working in test screenings with the audiences. So my editor, Michelle Gold, and I discussed trying animations instead of the text for these transitional pieces, and it ended up being MUCH more effective and really tied the film together nicely. And then when my main man, Cedric the Entertainer, graciously agreed to narrate the animations for us, it was the ultimate cherry on top.

You somehow reverse the rom-com cliché: usually we are accustomed to films where the heroine is unlucky in love. Are you taking a feminist stance by reversing roles, or are you simply showing the softer side of the male gender when it comes to romance?

Thank you very much for noticing that! Yeah we loved the idea of leaning into a male character who was vulnerable and heart broken because… that is real life! Men are vulnerable and heartbroken all the time. And I think it’s healthy for men, and all people, to embrace their vulnerability and be in touch with their true feelings. Anything to dissolve the stigma that men have to be tough and never cry or show their emotions is positive in my opinion. I mean, I cry watching romantic comedies while clutching a carton of ice cream on a weekly basis… just kidding ;) Or am I…

The mood of the film is preceded by Oscar Wilde’s quote: ‘The Heart Was Made To Be Broken.’ Do you have a pessimistic perspective on love or is this film a way to exorcise heartaches?

I think true love is a disastrously unattainable myth that we should all give up on ever trying to capture and experience … just kidding ;)

No, I love love! This is a fantastic question that my therapist will no doubt be reading with great curiosity and anticipation. I chose this quote because it perfectly captured where Greg was in the beginning of the film. He recently proposed to his longtime girlfriend who admitted to cheating on him with their couples therapist. I mean… how f*cked up is that!? So I think Oscar and Greg must have shared similar drowning-in-heartbreak-types of feelings, if you will, that really captured the themes of the film in his simple, yet powerful, quote.

For me personally, I think this film and character exorcised a period in my life that included a break up, but was also entrenched with a number of tragedies and major life changes that occurred in my life in a very short span of time, which led to a dark period of depression for me right after I graduated college. So I no doubt drew from that feeling and experience when I was imagining what Greg was going through in this film.

In terms of my view on love — I think it’s wonderful and should be embraced whenever it arises! And I wish it was more prevalent in the world (not just romantic love but love in general) than it is now. If everybody acted out of love, we would be in a much better place than we currently are.

Any anticipations you can share on your upcoming projects?

I can’t say too much yet, but I am casting my next feature, which is a dark heist comedy set in Los Angeles, and it was inspired by some of my favorite filmmakers, including Quentin Tarantino and the Coen Brothers.