Dauzat St. Marie Aims to Fight Cancer with In It Together Exclusive Poster Premiere

After triumphing over breast cancer, Los Angeles singer-songwriter power duo Dauzat St. Marie is collaborating with the American Cancer Society to raise money. The partnership will feature the folk-pop-rock musicians working with the health organization to release its new anthem of hope and unity, ‘In It Together.’

Dauzat St. Marie is releasing the video for its latest single tomorrow, Friday, November 13. The ‘In It Together’ video is being used as a platform for awareness and fundraising, as it spotlights the unsettling statistic that one in every eight women will be diagnosed with breast cancer. With the musicians unveiling the video tomorrow, ShockYa is exclusively premiering the poster for their ‘In It Together’ campaign.

Dauzat St. Marie, which is comprised of Mat Dauzat and Heather St. Marie, have set up a special text-to-give campaign with the American Cancer Society. The ‘In It Together’ campaign has been set up to receive donations to support the organization’s lifesaving cancer research, programs and services. People who wish to support the effort can text DSMBAND to 20222 to make a $25 tax-deductible donation. They can also visit the American Cancer Society page on Dauzat St. Marie’s official website to make donations of different denominations and methods.

While Dauzat St. Marie was on tour with Pat Benatar and Rick Springfield, St. Marie discovered what many women fear: that she had a lump in one of her breasts. At the end of that tour, the duo went directly to specialists to learn that she had Stage 2B breast cancer, which required them to focus on battling her cancer.

In keeping with their genuine personal connections with their fans, Dauzat St. Marie decided to share St. Marie’s cancer battle via social media. Slightly nervous to do so at first, they immediately received support and love by their fans. Throughout St. Marie’s public cancer battle, she inspired other women to get mammograms, which led to the singers fully recognizing the power of their platform to potentially save lives.

After a year of surgeries, chemotherapy and radiation therapy, St. Marie is now in full remission and on a mission. She and Dauzat wrote ‘In It Together’ to spotlight and celebrate the power of the community that supported them during her battle, which inspired their commitment to rally around others going through similar battles.

The alternative-soul-Americana duo is also notable for having been featured on the ‘Saw III’ motion picture soundtrack in its previous incarnation, Hydrovibe. For more information on Dauzat St. Marie, visit its Spotify, iTunes, YouTube, Facebook, Twitter and Instagram pages. 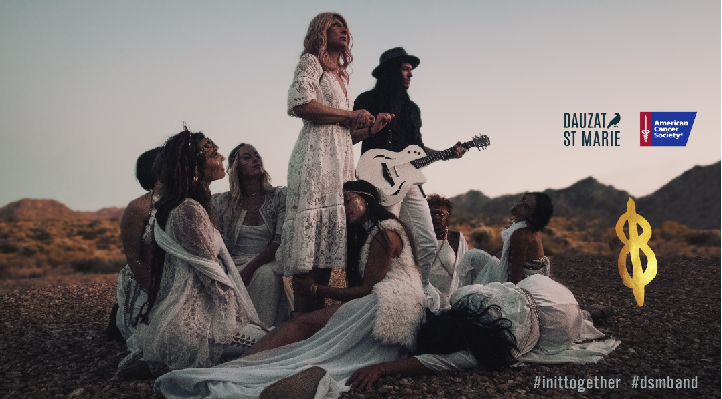 Aggregate Rating
5 based on 1 votes
Brand Name
Dauzat St. Marie and the American Cancer Society
Product Name
'In It Together' Campagin