The boxer says it was a key element in his training; Also credits 5-MeO-DMT 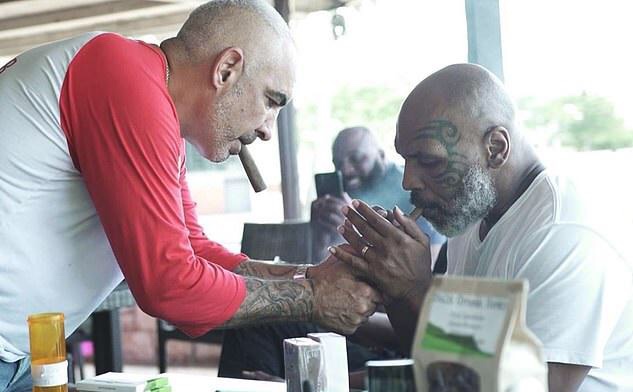 The world stopped fretting about the U.S. election, and even the pandemic, to come together for a Saturday night and watch Mike Tyson and Roy Jones Jr. fight on PPV — the fact that a TV event brought so many millions together (thanks to FITE TV) was itself a throwback. Add Snoop Dogg on commentary and you’ve got some serious nostalgia.

The fight was a draw, and all the arguments about the rules faded away as people just decided to have a good time. Who had the best time? Probably Iron Mike. In post-fight interviews he revealed he had smoked weed before the fight.

When asked at the press conference if he smoked the day of the fight, Mike pounded the table.

He also  spoke about how he doesn’t care about material things anymore….laying out his trademark childish giggle.  These are the insights of a man who has truly seen the light.

Back in 2000, when it was revealed Tyson had smoked marijuana before his fight with Andrew Golota, it was a big deal. This time not so much.

Tyson has even shared that his use of the Toad–aka 5-MeO-DMT–led him to do the fight with Jones and to train hard. Tyson calls toad venom a medicine, and many people say it changes their outlook and philosophy in a permanent way.

Tyson is known to smoke at least $40k worth of marijuana a month. He’s also has a healthy CBD beverage business, is working on Weed-friendly chain of family resorts called Tyson Ranch, and is working on collaborations with Greek billionaire Alki David on his own private island spa and clinic called Swissx Ranch.

The duo have appeared on podcasts together and are also working on product collabs between the David’s leading CBD brand, Swissx and Tyson’s Tyson Ranch line of products. (Swissx products are available online now at Swissx.com).

Last Spring, before the Triller fight between Tyson and Jones Jr. was announced, David and Tyson made news around the world when it was revealed that David was bidding on the naming rights for the legendary soccer stadium Camp Nous in Barcelona. The football club chickened out, afraid to become the first stadium named for a hemp brand despite the city of Bareclona’s famously liberal attitudes. At the time rumors flew that Tyson was in on the deal as well because of the other projects brewing between the two.

Watch the world’s greatest boxing every day at FilmOn TV on the FilmOn Boxing channel.