Retro styles are proving yet again that they’re not a thing of the past with Max Miller’s hit culinary YouTube channel, ‘Tasting History.’ The chef, who realized he had a passion for making historical deserts while watching ‘The Great British Bake Off’ several years ago, has found recent success this year by uniquely sharing his interest in food and its historical context.

‘Tasting History‘ is a weekly series that focuses on a delicious blend of culinary skills and historical perspective. On the show, the host gives viewers a window into recipes from Medieval times to the turn of the century, including 400-year-old buttered beere, Civil War bread pudding, pumpkin pie from 1670 and 19th century quesadillas.

Since launching at the end of February, partially in response to the onset of COVID-19, ‘Tasting History’ has gained over 420,000 subscribers. The most popular of the show’s videos has garnered over one million views, and the channel’s overall views total 12 million.

Miller generously took the time earlier this week to talk about hosting ‘Tasting History’ during an exclusive interview over the phone. Among other things, the chef discussed that he decided to launch the channel after he became interested in baking while watching ‘The Great British Bake Off,’ and his friends and family convinced him to share his passion for trying recipes from different eras with the world on YouTube. He also noted that one of his favorite things about hosting the show is when his viewers share their photos of the food they make that’s inspired by one of the recipes he has featured, and also suggest other recipes he should make on the show.

The conversation began with Miller explaining what initially interested him in cooking, and how he became a chef. “Cooking’s actually a fairly new phenomenon for me! I only started cooking about six years ago after watching ‘The Great British Bake Off,'” he revealed. “I was inspired to try baking what they made on the show. By doing that and making many mistakes, I essentially taught myself how to bake.

“I would then bring those things into work,” the baker continued. “I have always really loved history, so the dishes that excited me were the ones that were historic, and have some kind of history, even if we still eat them today. So I would tell my friends at work about them.

“Then last Christmas, one of those people at work said, ‘You should put this on YouTube-people would watch (videos of you) making and talking about historic foods.’ I was like, ‘Okay,'” Miller continued with a laugh.

“I then kicked the idea around in my mind, and decided I would start with something small. I made a couple of preliminary videos. Then when COVID hit, I got furloughed from my job, so it seemed like the perfect time to step it up, and make the videos in order to keep me busy,” the host added with another laugh.

Miller then delved into how he enjoys featuring all historical eras on his channel. “Any historical era that I’m researching is what I’m interested in, honestly; I kind of bounce around. But when I started (the show), most of the recipes were from Medieval times, and I’ve always enjoyed Medieval, European history, especially from England,” he shared. “So that’s really where it started.

“It was actually viewers who said, ‘We’d love to see you make something from the 19th century or ancient Rome,’ for example,” the chef divulged. “The channel was very small at this point; there were only a few hundred viewers, most of whom were my friends. But that’s what got me branching out.

“But every time I research a new cuisine or period in history, it becomes my favorite that week,” Miller added with a laugh. “That’s a great thing for someone who has trouble focusing on one thing for very long.”

Following up on the research element of ‘Tasting History,’ the host admitted “That’s the process that takes the longest. (The process) involves everything I do before I get into the kitchen and get on camera. The research can take anywhere from 15-20 hours…and as much as 60 hours, if it’s really something I don’t know anything about.

“So I spend most of my week reading and looking for sources, as well as really interesting quotes from history that I can weave into a story. I then spend a few hours writing a script, and then I get to cooking. So most of the work is done before I even get started” shooting,” Miller divulged.

The social media personality then further delved into his experience of starting and maintaining his YouTube channel. “It’s been kind of surreal. For me, the hardest part is the actual filming and technical side of making the videos; it’s a lot harder than I thought it would be,” he admitted. He added with a laugh, “I’m glad I didn’t know how hard it would be (beforehand), because I probably wouldn’t have started.

“But once I get a video out there, the fun really begins. I get to talk to people in the comments, and find out what they know about the history and food (featured on the episode), as well as other food they want me to cook,” the host continued. “A lot of the recipes I’ve made on the show have come from viewers who have suggested them.

“One of my favorite things has been when people end up making what I’m talking about on the show. Then they’ll share pictures, and either email them to me, or show them to me on Twitter or Instagram. So getting to see that I inspired someone else to give (the recipes) a shot is really great,” Miller also noted.

“One of the coolest things is that over Thanksgiving, I had hundreds of people post pictures of the 17th century pumpkin pie recipe that I did. So just thinking that all of these people had this pie on their table on Thanksgiving because I brought it to life…was really a special treat,” the baker added.

Choosing which recipes to feature on ‘Tasting History’ is also a process that Miller enjoys. “A lot of people have inspired me to make different dishes on the show. They’ll mention something that has an interesting story, or just a dish that they want to see made,” he shared.

“But since I’m only making one episode a week, I haven’t gotten to the vast majority of those (recipes). I’ve only made a handful of those-about six or seven,” the host continued.

“Overall, I decide what I’m going to make is based the complexity of the dish. Some episodes take longer than others, and I’m always working on several episodes at once. Sometimes I have to do a dish that I know that I can get on the first try, and isn’t going to take me an entire day of cooking, so I can get the episode out,” Miller admitted.

The social media personality also revealed that sometimes he also films episodes that feature recipes that he already knows the history for, “which is really helpful. However, sometimes I’ll also come across an old cookbook, and it’s really fascinating, but it has 20 ingredients, and the processes are unclear, so I would have to do some things multiple times to make it edible. Or the recipes may be missing ingredients, and I would have to find out what they are,” he added. “So I know those recipes would take a few weeks, so I would have to plan them far out.”

The interview began to wind down with Miller sharing which recipes he’s looking forward to featuring in the coming weeks, especially in celebration of the holiday season. “December is basically all holiday recipes. (On one episode,) I’m doing tamales, but the discuss behind them isn’t too holiday related. Although, here in Southern California (where he lives), as well as in the southern U.S. and in Mexico, tamales are a holiday tradition,” he revealed.

“After that, I’m actually doing an episode on Saturnalia, which was a festival that took place at Christmas time during the Roman empire. It’s the precursor to many of Christmas traditions, from gift giving to lighting candles and Advent. For that episode, I’m going to make a recipe called globi, which is an early version of fried cheesecake with honey. Then I’ll be making George Washington’s recipe for eggnog just before Christmas,” the chef concluded. 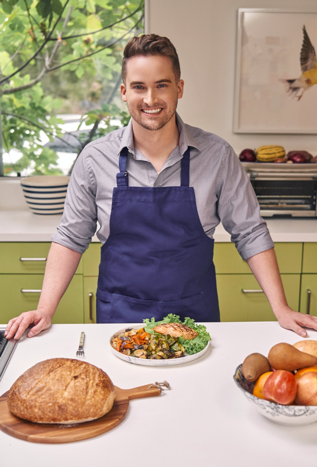