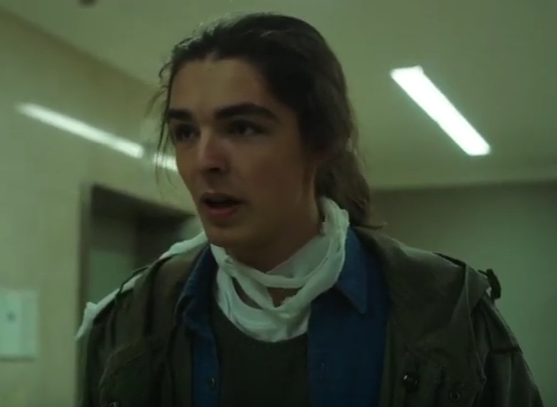 Many people are often driven to take self-serving actions to better improve their lives. But when they eventually see the differing emotions and perspective of those around them, they’ll start reconsidering their ideals and motivations. That’s certainly the case for Robin L’Houmeau’s character of Stan in the new drama, ‘Happy Face.’

The movie is now playing in virtual theaters, and is also being released today On Demand and On Digital, including iTunes, Amazon, Google Play, Xbox, Vudu, Direct TV, Dish Network and all major cable providers, courtesy of Dark Star Pictures. ‘Happy Face’s official distribution comes after it had an award-winning, lauded film festival run.

In honor of the thriller’s release, ShockYa is premiering an exclusive clip from the drama, which features Stan confronting Debbie Lynch-White’s character of Vanessa in a hospital. After realizing his mistake of misleading the members of the therapy workshop she runs, he tells her that he can help them. Vanessa responds by insisting that he never deceives her again.

‘Happy Face’ was directed and produced by Alexandre Franchi, who co-wrote the script with Joelle Bourjolly. In addition to L’Homeau and Lynch-White, the film also stars Alison Midstokke, E.R. Ruiz and Dean Perseo. The movie explores the importance of facial equality and representation by also featuring actors who showcase their actual conditions, without make-up.

Estranged from his manipulative cancer-stricken mother, Stan, a quixotic 19-year-old, dons a disguise and joins a therapy workshop for disfigured patients in a misguided attempt to reconnect with her. But when his deception is revealed, Stan, who is desperate to gain coping skills to care for his disease-ravaged mother, offers the afflicted patients a bargain: he stays with the group, and in exchange he teaches them how feel good about themselves : by using their “ugliness” as a weapon against our beauty-obsessed culture.