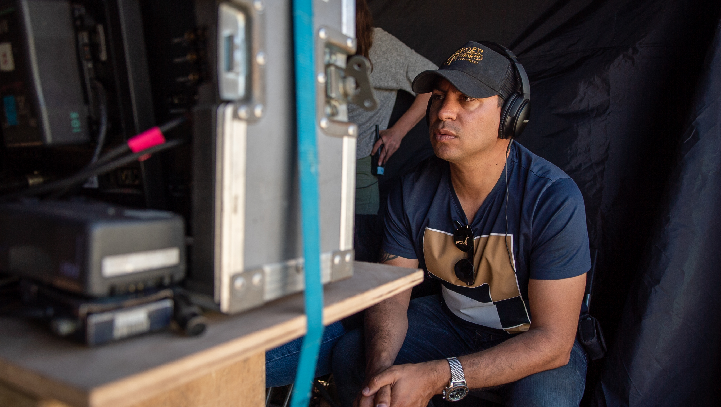 Even the seemingly most impossible tasks are actually within reach, no matter what obstacles people have to overcome in order to achieve those goals. That’s certainly the case for both fillmaker Hicham Hajji and the characters in his new action thriller, ‘Redemption Day.’

Since the time he was in school, the screenwriter-director was intrigued by the prospect of being able to shoot features in his native country of Morocco, despite the fact that he didn’t initially have any direct ties to the film industry. But after putting in hard work, Hajji became an assistant director on both local and international movies and television commercials, before he was able to create his own production company, H Films.

Through his company, the fillmaker made his feature film writing and directorial debuts on ‘Redemption Day,’ which he co-scribed with Sam Chouia and Lemore Syvan. The movie’s story follows a decorated U.S. Marine Captain, who, just as he’s adjusting to life back home in America, finds himself having to travel overseas again to Hajji’s home country in North Africa to save his recently kidnapped wife.

Saban Films is set to release ‘Redemption Day’ in theaters tomorrow, January 8, and then On Demand and Digital the following Tuesday, January 12. The drama follows decorated U.S. Marine Captain Brad Paxton (Gary Dourdan) as he tries to reintegrate back into civilian life after having just returned home to New York City from his tour of duty in the Middle East. He’s enjoying time with his family, including his wife, Kate (Serinda Swan), their pre-teen daughter, Clair (Lilia Hajji), and his father, Ed (Ernie Hudson).

When Kate receives an offer from her job to travel to Morocco to take part of an archaeological excavation, Brad encourages her to go and pursue her professional goal, despite the fact that he just returned home. But her dream quickly turns into a nightmare soon after she arrives in the North African country, as she’s kidnapped by a terrorist group when she and her group unintentionally cross the border into Algeria. When Brad is informed about his wife’s kidnapping, he’s forced back into action for a daring and deadly operation to save the woman he loves.

Hajji generously took the time recently to talk about co-writing, directing and producing ‘Redemption Day’ during an exclusive interview over the phone. Among other things, the filmmaker discussed that he was in part inspired to pen the script after one of his friends tragically and innocently died while she was in Africa for her work. The helmer also revealed that while directing and producing the movie posed challenges at times, he appreciated having the opportunity to work with Dourdan and the rest of the cast and crew to bring the timely story to the screen, and highlight the struggles people must overcome in order to achieve their dreams.

ShockYa (SY): You made your feature film writing debut with the upcoming action thriller, ‘Redemption Day.’ What was the inspiration in scribing the screenplay?

Hicham Hajji (HH): I had the idea after I lost a friend of mine who was a photographer. She was in Africa on a mission for Amnesty International, and was sitting in a hotel lobby, having a coffee with her crew. There was a bunch of terrorists who then went in and shot everyone.

SY: In addition to writing the script, you also made your feature film directorial debut on the drama. How did working on the screenplay influence your helming style on the set? How would you describe your overall directorial style?

HH: I wrote the script with two other writers, Sam Chouia and Lemore Syvan. I came up withe story and wrote the treatment, and then we wrote the script…We then went to production companies to try to make it happen. I also had to go to my investors and convince them to make the movie, and prove that this is something that could be profitable.

Once we had all of that in place, I originally wasn’t supposed to direct the movie, because it was supposed to be bigger than it turned out to be, financial-wise. But in the end, we couldn’t raise enough money, so as the writer and producer, I decided to direct the movie myself. I was really convinced that since it was my story and vision that I wanted to show on screen, it would be better if I also made it as the director.

Before this movie, I directed two short films, back in 2010. I was really taking my producer job very seriously…When I wrote the script, and saw what was going on all around it and the production, I thought it would be a good idea to direct the movie myself. That was where the biggest challenge started, because I was more on the production side than the camera side. But since I’ve been a first AD (assistant director) before, and directed the two short films, I really enjoyed the experience of directing this movie.

HH: I had the chance to meet Nancy Foy, who’s an amazing casting director. When she first read the script, she thought that it wasn’t a movie for her. We kept in touch, and got to know each other. I contacted her about the script again, about six or eight months later, and she read it again. She thought it was in better shape, and she started to believe in me.

Nancy thought that we could get some good actors, and she started the casting process. She brought on Andy Garcia, Serinda Swan, Martin Donovan, Robert Knepper and Gary Dourdan, of course. I owe her a lot; thanks to her, I was able to have all of these actors as a first-time director.

SY: Once the actors were cast, what was the process like of working with them to build their characters’ motivations?

HH: We cast Serinda in the later stage. I talked to her on the phone many times, and we sent her the latest version of the script right before we cast her. I also explained my vision to her, and she asked a lot of questions, including who was going to be the DP (director of photography) and production designer of the movie.

When I also explained my vision about her character to her, I told her that I didn’t want the character to be a simple woman, and only cry when she’s kidnapped. I wanted Kate to be a strong character, and a very powerful woman. No one would know what to do in this situation…but I wanted her to be powerful, and get close to someone on the inside, so that she could have a more comfortable time while she’s being held.

SY: What was the process like of collaborating with the actors, as well as the fight coordinator, Khalil Kharraz, and stunt coordinator, Younes Benzakour, to create the action-driven sequences?

HH: Since it was a low-budget film, we couldn’t afford to do a lot of prep work. But I brought my fight coordinator, Khalil Kharraz, from Los Angeles, and we had our stunt coordinator, Younes Benzakour, in Morocco, where he had been working for the past 10 years.

We were only able to bring Gary to Morocco two weeks before we began filming, because we couldn’t afford to bring him in earlier. During those two weeks, he worked with the fight crew at least five-six hours a day, doing all this kind of fight training. There was a good collaboration between the fight coordinator and the stunt coordinator. We talked about how how we were going to set up the fights in every scene, as well as all the jumping and cables.

I also showed Gary the set, and where we were going to film all the fight sequences. We worked very hard on it everyday during those two weeks. I think those two weeks were enough, because we were able to make everything happen.

SY: In addition to making your feature film writing and directorial debuts, you also served as one of the producers on ‘Redemption Day.’ Why did you decide to also produce the drama , and how did you balance helming and producing on the set?

HH: The producing aspect was quite challenging, because we had to find the financing. We got way less money than we thought we would have. But once we had everything set up, and the actors were cast, especially Andy Garcia, everything became a little bit easier than it was before.

I had the chance to meet this amazing producer, David Zilberberg, who had very little experience in field producing. But once we got on set with the entire crew and cast, David was very helpful. I was focused on both directing and producing during pre-production, but once we began filming, having David with me allowed me to just focus on the directing, and not managing the everyday problems as a producer.

SY: Principal photography on ‘Redemption Day’ was shoot on location in Morocco. What was the process like of shooting the film on location?

HH: The advantage of being Moroccan and filming in Morocco over the past 15 years is that I know most of the locations. When we were writing the script, I was thinking of most of the locations that I had experience with from working on my other movies, and where other film directors shot around the country. Besides the action scenes, I knew where most of the other scenes where going to be shot.

For example, all of the interior scenes that are set in New York City were actually shot in Morocco. because we couldn’t afford to go to New York to shoot. We just did drone shots in New York for the establishing shots.

SY: Saban Films will release ‘Redemption Day’ in theaters (tomorrow,) January 8, and then On Demand and Digital on (Tuesday,) January 12. What was the process like of deciding how you would to distribute the thriller?

Cancel reply
Hosting A Movie Night Like the Celebrities
Interview: Tamara Bass, Meagan Holder and Mekia Cox Talk If Not Now, When? (Exclusive)
To Top