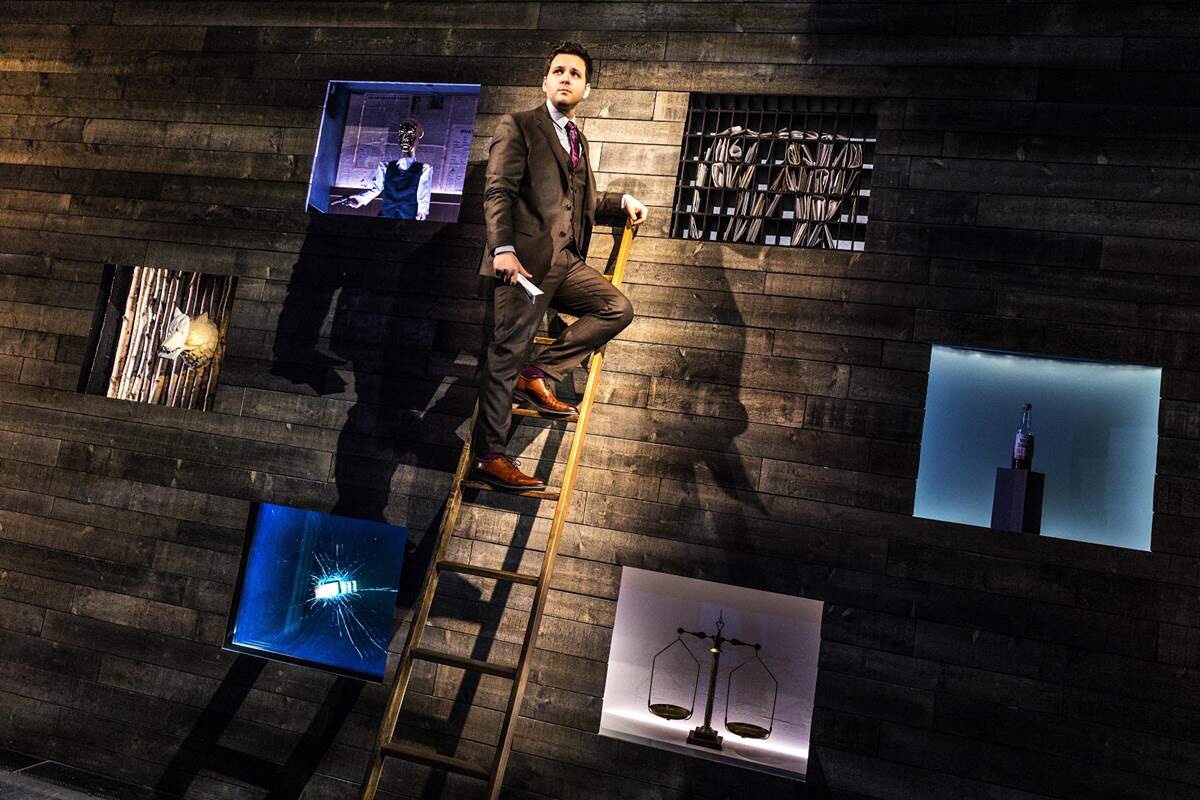 There are two kinds of audiences for live shows in New York. One is represented by the tourist, perhaps not fluent in English, who would go to a Broadway musical: “Chicago,” “South Pacific,” “Guys and Dolls,” presentations that are a lot of fun. Others are a more intellectual set that would patronize off-Broadway, even off-Broadway; likely to be in a serious vein, knowledge of English indispensable. There is third type of live presentation; the kind that would challenge people who think they know everything and like to brag about going to esoterica. What they see is likely to be a mix of entertainment and a delving into our minds and souls. Such a show played at the Daryl Roth Theatre, off-Broadway in New York in 2017, called “In & Of Itself,” considered to be a one-man exhibition but depending upon enough people in the audience to volunteer to stand up, even to come up on stage.

“In and Of Itself” as presented by Hulu and executive produced by the likes of my favorite TV comic Stephen Colbert, is a filmed play and then some; meaning that the presentation puts together a collage of audiences and evenings, melding some of the stunning 552 displays that ran before an audience of one hundred diverse souls. As directed by Frank Oz (both the stage show and the movie) with generous filming of a diverse audience including African-Americans and Asian-Americans, young, middle-aged and elderly, “In & Of Itself” may require multiple viewings to allow DelGaudio’s message to sink in: that we are not necessarily what we do for a living, even what goes on within our families. Each of us is a multiple, some of our character easily comprehended by others, while the rest of is below the surface, even hidden from ourselves.

In the opening scene, he asks members of the audience to come up before a large board filled with cards, each bearing the title of an occupation: nurse, ophthalmologist, dentist, and the like. Each is an “I am.” Some of the audience members will be called up to the stage, and as we watch the unfolding drama, we may wonder whether some of the folks are shills for the company who make sure that enough volunteers are called up each time. As a whole, nobody seems shy in the audience(s) that we see.

DelGaudio is a gifted man who knows his lines cold, a fellow of medium height, a close haircut, a trace of a beard. He wears a tie but that’s soon to come off to put across his eyes for one of his tricks. He is a master storyteller, segueing from a tale about a man who plays Russian roulette—the image of the person on one of the six dioramas on the wall. The deal is that he has 5 chances out of 6 to win, to save his life, and if he comes out ahead, he is rich. His troubles are over. But then again, as DelGaudio notes, if he loses, his troubles are also over (which brings the first laugh from the audience). This guy raises the ante, putting two bullets into the gun the next night, three the following, until he points the gun with six bullets at his head. How he manages to come out ahead? Find out by seeing the film.

The most dazzling part finds DelGaudio doing card tricks that are absolutely amazing. Ricky Jay is probably envious. If you see how he manipulates the deck to do everything he wants it to do, setting out the spades in order like a super royal flush, you might consider that he is a sorcerer. In the Middle Ages, the peasants would know what to do with him, and it’s not pretty.

Later he will present volunteers from the audience with letters allegedly written by members of their families, letters that bring some of them to tears. What these letters contain are writings that could easily have come from the participants’ mothers, fathers, brothers and sisters. That’s how well DelGaudio seems to know his audience.

Then just as you wonder whether these audience members are the sorcerer’s apprentices, he dazzles by getting half of the hundred to stand up in the every-seat-taken theater, looking at the folks, telling each what he or she is: an introvert, a vegan, an optimist, a lover. The audience at no point looks at a cell phone, a watch, his navel, but all eyes are concentrating on the majordomo.

What does it all mean? Paradoxically, we are all many things, and we are all alike. Forget about Superman, Batman, even Wonder Woman. This showman can see into our souls, as you can believe as you watch the audience members, one by one, feeling the magic.

Yep: he is an enchanter.