The most demanding, stressful situations that happen to people in their childhoods and adolescence often leave the most influential, prolific effect on the rest of their lives. Actor Jake Ryan and writer-director Sam Kelly, who both worked hard honing their respective crafts in school before launching, and finding success in, their careers in their native Australia and New Zealand, are now starting to garner true fame in the competitive world of Hollywood with their new crime drama, ‘Savage.’

The movie, which marks the feature film scribing and helming debuts of Kelly, an award-winning short filmmaker, was inspired by the true stories of New Zealand’s street gangs over a 30-year period. The story chronicles three defining moments in the life of Ryan’s character of Danny as he grows from an innocent boy into the violent enforcer of a local gang.

Quiver Distribution is releasing ‘Savage’ today on U.S. digital HD internet, cable and satellite platforms. The official distribution for the drama comes after it played at such festivals as the London Film Festival and the Busan International Film Festival.

‘Savage’ follows the life of fearless criminal Danny, who’s also known as Damage and is a member of the title gang, as he recalls his life of crime. He reports to his close friend and the gang’s president, Moses (John Tui), who he first met when they were roommates at a correctional facility when they were boys. While Moses is clinging to remain in power in the gang, as his rival, Tug (Alex Raivaru), is striving to take his job, the group still finds the time to party.

While at the gathering, Damage begins to form a connection with a woman he just meets, to whom he explains that his facial tattoos showcase who he really is. He begins to recount his life to her, and shares stories from the three most important periods in his life: when he was sent to the correctional facility and first met Moses; when they were first released from the facility and decided to form the Savage gang together instead of returning to their families; and the present, during which he begins to question if he wants to remain in the gang.

In honor of the movie’s distribution, ShockYa is premiering an exclusive clip from the feature. In the clip, young Danny and Moses (Olly Presling and Lotima Pome’e), along with the other boys who reside in the correctional facility, are forced to hold chairs up as a form of discipline. When Moses can no longer hold his chair up, the warden begins to physically reprimand him. Danny quickly comes to his roommate’s rescue, and begins to beat the warden, during which time he’s cheered on by the other boys.

Also in support of ‘Savage’s release, Ryan and Kelly generously took the time recently to talk about writing, directing and starring in the drama during an exclusive video interview over Zoom. Among other things, the actor and filmmaker discussed why Kelly was inspired to make his feature film scribing and helming debuts on the movie; why Ryan was drawn to portray Damage’s story on screen; the research they both did into the lives of at-risk youth in New Zealand who are the most likely to be targeted to join a gang; and what the experience was like of creating the physicality for the anti-hero. 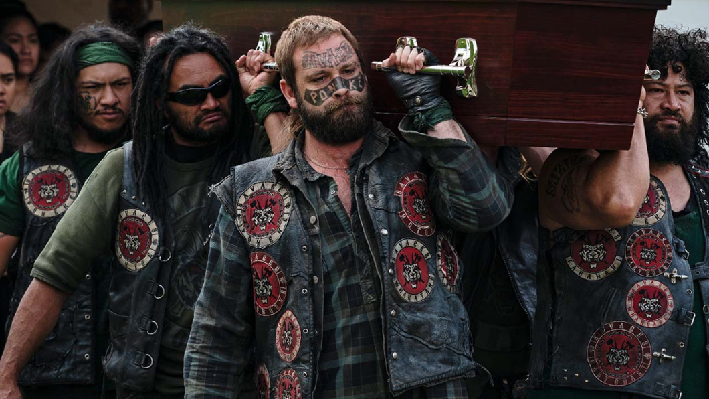