The determined fight to maintain personal freedom during other people’s times of conflict is a powerful driving force for the family of protagonists in the new period drama, ‘Savage State.’ The Western-driven survival story focuses on a French family that, after finding success upon settling in America, must not only defend themselves against the warring United States during the Civil War, but also against actress Kate Moran’s cunning gang leader, who forms a personal vendetta against them.

Samuel Goldwyn Films is releasing the French-Canadian-produced ‘Savage State’ On Demand and Digital today, after the movie had its North American Premiere at last fall’s Fantasia International Film Festival. The drama was written and directed by David Perrault.

Set during the American Civil War, ‘Savage State’ follows a family of French colonists, who are settled in Missouri, as they decide to move back to France, in an effort to avoid the battle between the Northern and Southern armies. Edmond (Bruno Todeschini), Madeleine (Constance Dollé) and their three daughters-Esther (Alice Isaaz), Justine (Déborah François) and Abigaëlle (Maryne Bertieaux)-have to cross the United State to reach New York, where they’ll board a boat to travel back to Europe. They’re led by the mysterious mercenary, Victor (Kevin Janssens), who brings his own danger to the family, in the form of one of his enemies from his past-the ruthless gang leader, Bettie (Moran).

Moran generously took the time earlier this week to talk about starring in ‘Savage State’ during an exclusive interview over the phone. Among other things, the actress discussed how after Perrault offered her the role of Bettie, she was immediately interested in playing the role, as she not only thought the overall story was very original for the Western genre, but was also drawn to the fact that her character runs on her own instincts. The performer also mentioned that she not only enjoyed working with the filmmaker on building her antagonist’s psychology and mindset, but also cherished the opportunity to build the tense dynamics between the character with her co-stars.

ShockYa (SY): You play Bettie in the upcoming period drama, ‘Savage State.’ What was it about the character, as well as the overall script, that convinced you to take on the role, and how did you become involved in the film?

Kate Moran (KM): I got a call from the filmmaker, David Perrault, and I was living in L.A. at the time. He had seen me in another film, called ‘You and The Night,’ which was by the filmmaker, Yann Gonzalez, and liked it. So he called me and said, “I have this character, and I want you to play her.”

So I read the script and loved it, and we later met for coffee when I was back in Paris. I said, “I like your script,” and he said, “Great,” and I said, “Call me when you’re read to shoot.

The thing that I liked about the script, and specifically of the character of Bettie, was that I found it to be very original for the genre of a Western. He had a unique take on this French family during the (American) Civil War. (The family’s daughters) are naive and precious, but they still managed to survive. The character of Bettie, who’s their counterpart, is wild…She’s running on her own instincts, and doesn’t have a moral compass.

SY: Like you mentioned, the Western was written and directed by David Perrault. What was your experience like of collaborating with him on developing Bettie’s character arc throughout the movie?

KM: He’s a very visual filmmaker, as you can see in the film, which is beautifully shot. But we didn’t spend a lot of time (discussing) the psychology of the character; instead, we spent a lot of time speaking about the choreography of the scenes. Through that choreography, we were able to naturally bring out the character. Also, the elements that we were working with, including being outside in the cold and being with the horses and guns, were also a big help in developing the character.

SY: Speaking of working with the guns and horses, and with the drama being an action-driven Western, what was the process like of also creating the physicality for Bettie?

KM: We all had the chance to work with the horses for a couple of afternoons before we began shooting, which was so much fun. I’m not a horsewoman, but I’m also not afraid of them, as I rode them a little bit when I was a kid. (But working with them on the film) was quite nice, and I realized that I enjoyed it.

We also had an afternoon of shooting practice, which wasn’t one of my favorite things, but it was obviously necessary for the character. I also had to learn how to manipulate a knife…(Learning the choreography) was interesting, because I have a background in dance, so I like having a bit of action in (my films)-it’s fun.

SY: ‘Savage State’ was shot on location in Canada, France and Spain. What was the process like of being able to shoot the film in the different countries?

KM: It was cold! When you go home after you’re outside and lie down, you realize that being outside in the fresh air is very tiring; you feel like you’ve had a workout when you’re out in the open air all day or all night. When you’re also out in the cold, your body confronts things in a different way, because you’re also fighting to stay warm.

That was especially true when we shot the scenes in the snow because we were up in the mountains in Quebec, and it was very cold. That was an experience that I hadn’t had before, so that was interesting.

SY: ‘Savage State’ also stars Alice Isaaz, Déborah François and Maryne Bertieaux. What was the process like of collaborating with your co-stars to develop the hostility between your characters?

KM: My character really has her eyes set on Esther, who’s played by Alice Isaaz, and is the mouse to Bettie’s cat. But working with all of the actresses was great-they’re all wonderful, and it was really easy for us to get along. That obviously made the work much easier.

We had to go through a scene quickly to figure out how they would work, which was important. If you don’t have an immediate connection and trust, it can be a little bit laborious, especially for the director, as you try to find a rhythm. I think David was lucky in that (the rest of the actresses who make up the family) had a great complicity together, and brought me right in when I got to the set. It was really wonderful to work with all of them.

SY: Bettie has the most hostile relationship with Kevin Janssens’s character, the mercenary Victor. What was the process like of creating the tense backstory and history between the two before the events of the drama?

KM: I think the dynamic between Bettie and Victor is one that’s even mysterious to her. There’s something that draws her to him, but she’s also someone who’s so used to being in survival mode, and not needing anyone else, which throws her for a loop. The character of Victor is very mysterious, and out of anyone in the film, out for himself. So I think the mystery between them is that she has an allure for him, but she’s not sure if he also feels that way for her.

SY: Speaking of the fact that Bettie is always in survival mode, especially when it comes to Victor, who she knew before the events of the movie began, she’s a strong-willed woman who’s in charge of a gang of masked men. Why do you feel it was important to showcase her strong-willed nature as the gang’s leader, especially when it came to her relationship with Victor?

KM: The thing that I liked about it, and found to be touching, was she’s always on the brink of going too far because she doesn’t understand how to fear things. She can confront Victor when he points a gun at her because she’s sure that he isn’t going to shoot her. She can also be the head of this gang of masked men because she’s sure they’re going to follow her. There’s something in her that runs on this instinct, and that was a nice skin to be in

SY: Samuel Goldwyn Films (is releasing) the Western On Demand and Digital (today). Why do you feel the digital distribute is a beneficial for this type of film?

KM: I’m so happy that the film is going to have a life with an audience, and people are going to be able to see it in the unfortunate world that we find ourselves in now, due to the global pandemic. We’re all staying in our homes now, so the fact that people can see it in their homes is wonderful.

Obviously, in a different time, I would have preferred that there were also cinema showings, so that people can see it on a big screen. It has some grandiose landscapes and beautiful cinematography that’s great for a big screen. I come from the world of theater, and audiences sitting and watching together is something I miss terribly.

But I’m happy that we can still see new films as they come out, and independent films are being supported by distributors in this way. Otherwise, no one would be able to see them if we didn’t have these (digital) platforms. 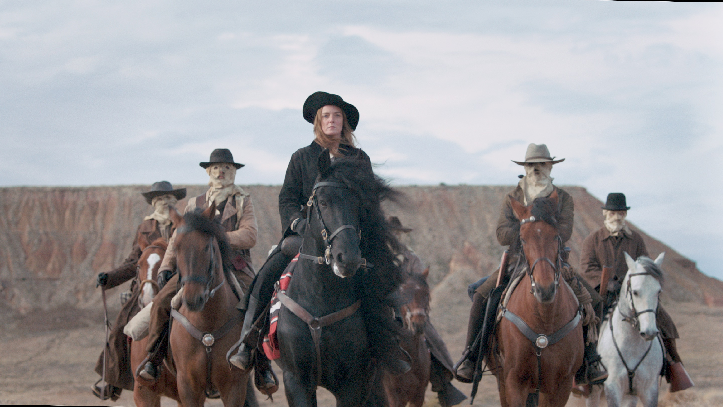