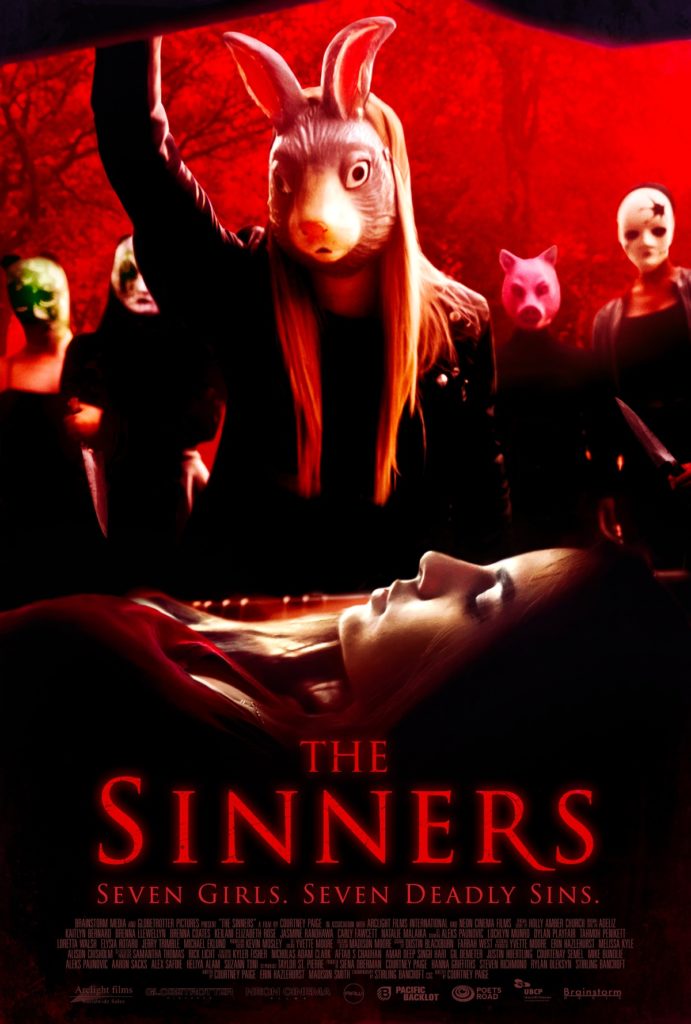 The poster for Courtney Paige’s horror thriller, ‘The Sinners.’

The people who are the most at peace with themselves and their existences are often those who have the courage to take risks and pursue the ambitions they have set for themselves. That’s certainly the case for both the filmmakers and characters of the new horror movie, ‘The Sinners,’ which is inspired by such ’90s teen cult classics as ‘Jawbreaker,’ ‘Cruel Intentions’ and ‘Scream.’ Driven by a diverse cast and crew, who, like the protagonists, aren’t afraid to take control over their own lives, ‘The Sinners’ relatably emphasizes how far people will go to break down the barriers that are holding them back.

Courtney Paige made her feature film directorial debut on ‘The Sinners,’ which she also co-wrote with Erin Hazlehurst and Madison Smith. Brainstorm Media is releasing the drama today On Demand.

‘The Sinners’ follows seven girls from a religious high school as they decide to rebel against their families and town by starting a cult where they embody the seven deadly sins. Grace Carver (Kaitlyn Bernard), the daughter of the local pastor (Tahmoh Penikett) and most popular girl in school, discovers that one of her friends, Aubrey Miller (Brenna Llewellyn), has gone against her and revealed all of their group’s secrets to the adults in their lives.

So Grace decides that action must be taken. As a scare tactic, she convinces the five other girls in the group to kidnap Aubrey, but in the middle of an argument, she goes missing. As the remainder of their cult begins to be targeted, Grace and the rest of her friends realize there’s a much darker secret behind their small town. The girls question whether they’ll survive the rest of the school year as they start investigating the mystery behind why they’re being targeted. If they can’t figure it out, they could become suspects, or worse, victims.

Paige generously took the time recently to talk about co-scribing, helming and producing ‘The Sinners’ during an exclusive interview over Zoom. Among other things, the filmmaker discussed that she was happy to scribe the screenplay for the thriller with Hazlehurst and Smith because they not only have similar writing styles, but they also offered unique ideas on the development of the feature’s plot. She also mentioned that she enjoyed directing and producing the movie, as well, as it offered her extensive creative control, including with the casting of the lead roles and the way she was able to help the performers portray their characters on screen.

The conversation began with Paige explaining why she was inspired to co-pen the script for ‘The Sinners’ with Hazlehurst and Smith, and what their overall writing process was like on the film. “I had thought of the idea for the film seven years ago. We then quickly got investment; investors came through and wanted to make a project. We were originally going to do another one that I had an idea for that was called ‘Neon Candy,’ but I wanted to save that one for later,” she revealed.

“So I said, ‘I have this other concept,’ and told them about it. Everyone loved it and wanted us to write it. My mom then said, ‘I know this writer; her name’s Erin Hazlehurst, and she’s really good, so you have to meet her.’ So I met Erin, and within 10 minutes, we were having coffee and said, ‘We have to do this,'” the scribe shared.

“So she and I wrote the first draft in less than two weeks over the Christmas holiday. We then ended up writing 30 drafts,” Paige continued. “I then brought on Madison Smith, and he added so many twists and nuances. He had a whole vision of who the killer should be, so we changed the killer. They were a fun team to work with, and I’m so grateful we had the opportunity.

“It’s interesting because people would be reading the script and say, ‘Wow, you guys have a similar style of writing, and we actually can’t tell who’s who.’ Overall, it was a fun experience to write the script with Erin and Madison,” the writer added.

In addition to penning the screenplay, Paige also cherished having the opportunity to make her feature film directorial debut with ‘The Sinners.’ She then delved into how working on the script influenced her helming style on the set.

“It was a fun experience. We didn’t have too much prep time, though because we wrote the script in December, and we went into principal photography in May,” the filmmaker revealed. “It was such a quick turnaround that I was like, ‘We’re really doing this,’ and we had to dive right in. There was a lot of stress, but that’s true when you’re making any indie film. We had such an incredible and supportive team, and we’re so grateful for that.”

In addition to Bernard and Llewellyn, the drama also stars Brenna Coates, Keilani Elizabeth Rose, Jasmine Randhawa, Carly Fawcett and Natalie Malaika. Paige then shared what the casting process was like for ‘The Sinners.’

“The cast was incredible. We did multiple rounds of auditions and watched so many tapes from L.A., Vancouver and all over,” the helmer, who also has experience acting, shared. “It was a really unique experience to be on the opposite end of things, and see how each actor brought something different. There were so many talented performers auditioning for the film that I wish we had more roles. But we only had 36, which is actually a lot.

Once the actors were cast, Paige also enjoyed the experience of collaborating with them to build their characters’ arcs and relationships throughout the production. “It was a great experience. I spoke to them on the phone prior to filming about what movies they should watch and study,” she shared.

The filmmaker added that she “also spoke with my sister (Madison Moore), who created the key costumes, at length. We discussed what the characters would wear. We spent a lot of time with each character.”

Paige also noted that “When the girls arrived in our hometown to shoot, we had them meet at the mall, and we took photos in the photo booth. We all bonded, and they became this little clique very quickly. So it was nice that they had this instant organic chemistry.”

Further speaking of shooting the thriller in her hometown of Kelowna, British Columbia, the director cherished having the opportunity to film ‘The Sinners’ there. “Our hometown was so supportive. Whenever we asked anyone if we could use their location, they were so supportive. Everyone was so easy to work with and super accommodating. More films need to be shot in Kelowna, because it’s such a beautiful little community.”

Once the cast arrived in Kelowna, they worked with Paige to create the physicality for their respective characters. “The girls quickly grasped the choreography, so it was quite easy to create the stunts. So we didn’t spend too much time on that aspect of the production.”

While scribing and helming the movie, Paige also recognized the importance of serving as a producer on ‘The Sinners.’ She mentioned how she balanced her producing and directorial styles on the set.

“It’s not fun to run to the bank on your lunch break, but someone’s got to do it,” the producer admitted with a hint of a laugh. “But when you raise the financing, it gives you more creative control, which is nice. When you’re working as a director for a major studio, you often don’t have that. So it was nice to do everything kind of independently, and create the project that we wanted to.”

With production on ‘The Sinners’ now complete, and the feature being distributed today On Demand, Paige feels the digital release is beneficial for this type of independent film. “Siena Oberman and Hanna Griffiths are powerhouse producers, and helped us with securing the distribution. We went with Arclight International, which is an incredible sales agency. They secured us a deal with Brainstorm Media, and they’ve been absolutely incredible. They’ve put so much TLC into the release of the film, and I’m happy that we were able to find a home for the movie with them,” she concluded.