Veteran genre actress Barbara Crampton is once again proving that the most constraining situations can ultimately lead to the most emotionally revealing conclusions with her latest horror movie, ‘Sacrifice.’ The fan-favorite genre performer united with British filmmakers, Andy Collier and Toor Mian to create a character-driven, Lovecraft-inspired supernatural drama. Their new feature highlights how a seemingly strong married couple is easily influenced and manipulated by a sinister cult, which is led by the thespian’s character and worships a sea-dwelling deity, during a stressful time in their relationship.

‘Sacrifice’ is based on the short story, ‘Men of the Cloth,’ by Paul Kane. The screen adaptation was written, directed and produced by Mian and Collier, the latter of whom also served as the cinematographer.

The mystery movie opened in select theaters on February 5 and then On Demand on February 9. It’s also being released today on Blu-ray, courtesy of Epic Pictures.

‘Sacrifice’ follows New Yorker Isaac (Ludovic Hughes) and his pregnant wife, Emma (Sophie Stevens), as they return to the remote Norwegian village where he was born, following the death of his mother. He receives an unexpected inheritance from his parents, who are now both deceased-the home they shared as a family when Isaac was born.

Once the couple arrives in the European country, they meet the seemingly nice Renate (Crampton), the sheriff of the isolated island where he once lived, who offers to help them settle into the community. Isaac and Emma eventually find themselves caught in a nightmare, as an ancient evil awakens to claim a birthright of its own.

Crampton generously took the time recently to talk about starring in ‘Sacrifice’ during an exclusive interview over Zoom. Among other things, the actress discussed why she was inspired to play Renate in the film; what her experience of creating the arc for the sheriff with Collier and Mian was like throughout the production; the dynamic she shared with her co-stars, especially Hughes and Stevens, during the production; and how shooting the drama on location in the remote Norwegian village helped guide her portrayal of the cult leader.

Watch our exclusive video interview with Crampton above, and the official trailer for ‘Sacrifice’ below. 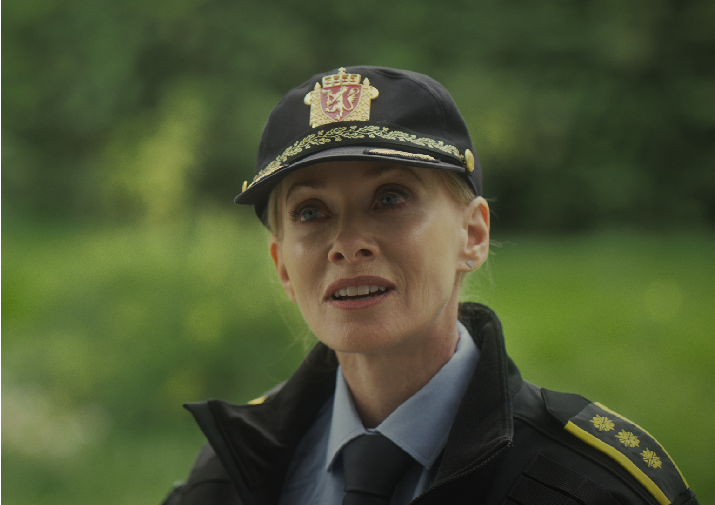