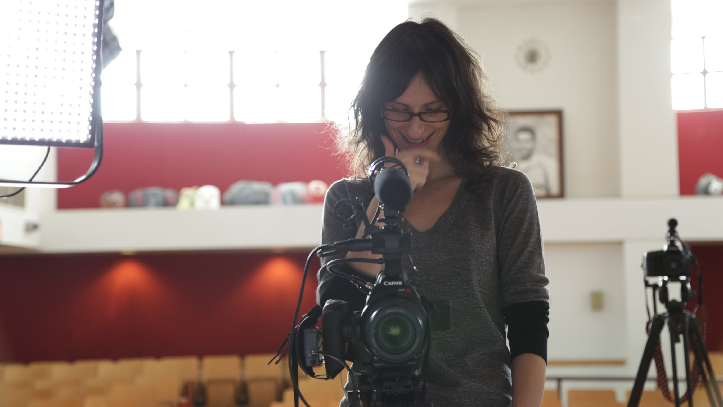 Director-producer Lillian LaSalle on the set of her documentary, ‘My Name Is Pedro.’

With many children struggling to learn remotely from home this past year since the start of the COVID-19 pandemic, the American education system needs a compelling message of optimism. The new documentary, ‘My Name is Pedro,’ is offering that sense of hope as it emphasizes the importance of having dedicated educators within the infrastructure of America’s public education system.

The timely film is being releasing on VOD and DVD today in the U.S., Canada and UK. The movie is being distributed on such VOD and cable platforms as Amazon, Apple TV, GooglePlay, Youtube FandangoNOW, Verizon and Wave Broadband, courtesy of Passion River Films.

‘My Name is Pedro’ explores the seemingly impossible journey of South Bronx Latino educator and maverick, Pedro Santana, a former special ed student, whose mantra is: every kid can learn despite their circumstances. A New York Times profile of his out Of the Box teaching techniques thrusts him into the spotlight, which creates great opportunities for change, but also has its downside: public school politics which, despite the cries of students and parents alike, threaten to take him down.

LaSalle generously took the time recently to talk about directing and producing ‘My Name is Pedro’ during an exclusive interview. Among other things, the filmmaker discussed that she was interested in helming and producing the movie because she wanted to share how Santana’s personal approach to education has positively impacted the lives of his students and their families with the world. She also expressed her appreciation over how enthusiastically audiences reacted to the documentary at the festivals it has screened at, and shared how much seeing Santana’s dedication meant to them.

The conversation began with LaSalle discussing what inspired her to make her feature film directorial debut with ‘My Name is Pedro,’ and highlight the title educator’s career in a documentary. “I discovered Pedro Santana while I was reading an article in the New York Times, which featured him on the cover of the Metropolitan section. It talked about how he changed a failing middle school in the South Bronx,” she shared.

“He provided a ton of inspiration for the kids there. There were failing grades and fights in the hallways. He went in and completely changed the attitudes of the teachers and students alike,” the filmmaker continued. “The reason why I was so drawn to him was because of his personality and charisma… Pedro’s also watchable as the subject of this film.

“I think it’s very timely that it’s coming out now on streaming platforms. As a parent, I know that kids are going back into the classroom (this) week for hybrid learning,” LaSalle added. “This film reminds us the importance of lifting up our educators. Teachers, administrators and students alike have had such a difficult time during this period. It’s a challenge for teachers. So it’s a great time for families to watch this film and be inspired about what it means to go back to school, and for them to be inspired by their favorite teacher.”

Once she began production on the movie, the helmer did some research into Santana’s life and career, in order to get to know him better. “Pedro gave me full access into his life and career…I didn’t have to do much research, though, because Pedro’s an open book. He’s someone who will tell you everything, which inspired me to change the way I live my life,” she divulged.

While she was shooting ‘My Name is Pedro,’ LaSalle cherished having the opportunity to interview the people in the educator’s life, including his students and colleagues, in order to get to know him better. She delved into how she decided who to speak with and include in the documentary.

“The collaboration with people who wanted to be in the film was both exciting and overwhelming. There wasn’t one person who I spoke to who didn’t want to be a part of the film,” the director shared. “Everyone, from teachers to families, wanted to talk about how incredible their experience with Pedro has been. He always left his door open, so that people can stop by anytime for his help, which is rare. He knew every student by name, no matter where he worked throughout his career.

“So I had great access to people to set up interviews, which included his family members. He’s part of a great tradition in his family, which is from Puerto Rico. He has several siblings, so his family is big. From his parents down, everyone wanted to talk about what it was like to have Pedro as a family member,” LaSalle noted.

“There’s also one particular student who we track throughout the film. He had Pedro as a principal in middle school, and he spoke about how Pedro encouraged him to get his grades up. We track that student as he went to college at Stony Brook University, and he talks about the impact Pedro had on his life,” the filmmaker added.

In addition to helming ‘My Name Is Pedro,’ the filmmaker embraced the experience of also serving as a producer on the feature. She discussed why she decided to also produce the the movie, and how she balanced her producing and directorial styles during the production.

“I always knew that I would produce and direct the film. I’m a producer by trade, so I’ve produced many films throughout my career, but directing was new to me,” LaSalle shared. “Balancing the two jobs came very naturally to me, as I found that I had a real gut instinct for directing a documentary.

“I realized very early on that an important part of making a documentary that focuses on one subject is how comfortable you are asking questions. I found myself to be very comfortable with asking the important questions, and listening” to what the interviewees had to say, LaSalle revealed.

“I found myself enjoying balancing the two jobs, because producing the project gave me a lot more creative control over how I let each shooting day go…I never had an itinerary for each day we shot, which was a choice that I made. That was great, because I ended up discovering things that I wouldn’t have found if I had a written itinerary. Overall, doing both jobs was a great experience,” the producer added.

Once principal photography on ‘My Name is Pedro’ was completed, it wasedited by Mark Demolar and Mary Manhardt. LaSalle cherished the process of collaborating with them to put the final version of the movie together. But she admitted that she also “didn’t realize as a first-time filmmaker how long the editing process would take. I consulted with very well-known documentaries before I started shooting the film, and they talked about how man years it would take sometimes to edit their films…and I thought, that can’t be true. But it is true; it took over two years for us to edit this film.

“The film could have gone a variety of ways. It was only through the process of watching rough cuts of the film that you realize what’s missing. Even when you get the film in the order that you want it, you’re still constantly changing it around,” the director continued. “Through the process of editing, I wanted to include a lot of the challenges that Pedro faced, and not just make it a fluff piece about how great he is. That’s a decision-making process that I had to make over a long period of time.”

“It was a huge wake-up call to show ‘My Name is Pedro’ at film festivals, in a good way. I never realized how moving the film would be to other people until I watched the audiences’ reactions at those film festivals,” the filmmaker revealed.

“I sat in at every screening…There was laughter at places I didn’t expect to hear laughter. There was also tears at places I didn’t expect,” LaSalle also admitted. “The Q&As were also so enlightening. People asked me questions with tears in their eyes, and wondered how things are going now for Pedro. Teachers also said, ‘I’m going to try to be like Pedro.’…After the screenings, a lot of audience members also wanted to talk about which teacher they had who was like Pedro for them.”

With ‘My Name is Pedro’ now being officially released on VOD today, following the conclusion of its festival run, the helmer added why she thinks the digital distribution is beneficial for this type of documentary. “The streaming release follows a theatrical virtual release. We’re in a period of time where people aren’t going to theaters, but are able to watch films at home, which I actually prefer,” she shared.

“Being picked up by my distributor, Passion River, in order to be on the streaming platforms has been really exciting…as the company was on my top three list of distributors that I wanted to grab the attention of” while she was deciding how to release the film, LaSall shared. The movie was unveiled today “on Amazon, Apple TV, iTunes, Google Play, Youtube, FandangoNOW and Vimeo, and the list goes on. So there are many ways for people to tune in,” she concluded.