When some people aren’t able to fulfill their long-term professional goals, they ultimately change their aspiration to instead earn money in the easiest way possible. That’s certainly the case for Oscar-nominated actor Mickey Rourke‘s crime boss character and his associates, one of whom is played by former teen icon, Andrew Keegan, in their new crime thriller, ‘Adverse.’

The latter, who initially garnered fame in the late 1990s in such projects as the cult romantic comedy film, ’10 Things I Hate about You,’ and the hit family drama television series, ‘7th Heaven,’ is proving his versatility as an actor in his latest project. The performer has been making a bit of a comeback in the acting world over the past few years, particularly through his continued partnership with the movie’s writer-director, Brian A. Metcalf.

‘Adverse’ marks the second collaboration between the actor and filmmaker, who previously worked together on the 2018 vampire feature, ‘Living Among Us.’ In their latest project, Keegan plays an employee of Rourke’s character, whose main ambition is to do whatever it takes to make his boss happy, no matter what kind of illegal or immoral actions he must take in the process.

‘Adverse’ follows rideshare driver Ethan (Thomas Nicholas) as he struggles to make ends meet and take care of his teenage sister Mia (Kelly Arjen). But when he learns that she and her boyfriend, Lars (Jake T. Austin), are deep in debt to drug dealer Dante (Metcalf), Ethan’s life begins to spiral even more out of control.

When Mia then goes missing, Ethan discovers that crime boss Kaden (Rourke) and several of his associates, including Jan, are behind the act. In order to get close to him and take out his revenge for his sister’s increasing troubles, Ethan takes infiltrates Kaden’s operation by taking a job as his driver. Ethan then hunts down members of his new boss’ crew in order to wreak bloody vengeance as he prepares to confront Kaden himself.

Lionsgate is releasing the drama on Digital, On Demand and DVD today. The digital and disc distribution comes after ‘Adverse’ premiered in theaters on February 12 by Black Jellybean Productions.

Keegan generously took the time recently to talk about starring in ‘Adverse’ during an exclusive interview over the phone. Among other things, the actor discussed that he was in part drawn to take on the role of Jan in the film because he enjoyed working with Metcalf and Nicholas on ‘Living Among Us,’ and was interested in making another movie with them. Keegan also mentioned that creating the physicality for his character helped him showcase the disregard Jan has for both morals and other people while he was carrying out his duties for Kaden.

The conversation began with the performer discussing what drew him to play Jan in the thriller, and how he became attached to the project. He mentioned that he had a positive experience with Metcalf and Nicholas while they collaborated together on ‘Living Among Us.’ “So when they were getting together to make this film, they called me and said, ‘We enjoyed working with you on ‘Living Among Us,’ so would you want to take on a role in ‘Adverse?,’ Keegan divulged.

“Initially, I was going to play a different character. But when I then read the role (of Jan), I was intrigued to play an opposite type of character, because I often play nice guy roles. But this was a more sinister character, so it was interesting to me to get to play a character with a darker vibe,” the actor also shared.

“When I spoke to Brian, I expressed my interest in that particular role. He was open to it,” Keegan continued. “Again, after working with Brian and Tom previously, they expressed that they were excited to get to work together again on this film.”

Further speaking of having the chance to reunite with Metcalf on ‘Adverse,’ the performer noted that “Brian’s a consummate filmmaker, and brings a passion and energy to making films. Since I had a great experience making ‘Living Among Us’ with him, when he brought this film to me, I was excited to get into the nitty-gritty with him again. Filmmaking is a fun, passionate experience, which is certainly the case with Brian,” Keegan gushed about the writer-director.

“We made this film on a shoe-string budget, and were able to get it done pretty quickly, but were still able to capture Brian’s vision,” the actor also shared. “Knowing that he had done a great job with ‘Living Among Us,’ I was very happy to be able to work with him again on this film.”

In addition to enjoying his time working with Metcalf on ‘Adverse,’ Keegan also appreciated his experience of being able to collaborate with his co-stars. “On this film, unlike on ‘Living Among Us,’ there were different moments. On this film, I mostly worked with Mickey and Brian, and a little bit with Tom,” the performer noted. “But the whole process of making this film with all of them was great. I’ve enjoyed working with Brian and Tom based on our previous experiences.

“I thought that Tom brought himself to a whole different place with his character in this film. It’s not something that we’ve particularly seen from him before, and it’s quite different than the character he played in ‘Living Among Us.’ His work is really great in this film,” Keegan also stated as he continued complementing his co-star.

“Ultimately, I think Brian did an amazing job putting this film together. The fact that it’s out in theaters and also (playing) on streaming platforms, is so impressive, and it’s nice to be able to show his hard work,” the actor added.

Being able to work with his co-stars, as well as the filmmaker, on creating the stunt work for the film was another experience that Keegan cherished. “Having the opportunity to play opposite Mickey and follow his lead, specifically on the physicality, was great. His character’s a greaseball, and had this long hair,” the performer noted with a laugh.

“We also did some work for my character’s teeth in order to make them look gritty. That helped me play someone who effortlessly kills people and disassociates from reality,” Keegan continued. “Overall, showing how blasé his attitude really is about being a murderous person was intriguing. There’s a sly sneakiness in his physicality that showcases that.”

Following up on the fact that Lionsgate is releasing ‘Adverse’ on Digital, On Demand and on DVD today, after it was distributed in theaters last month, the actor further revealed why he feels the dual release is beneficial for this type of movie. “Again, I’m super impressed that I get to have a film out in this pandemic environment, especially in theaters. But it will be much more accessible now that it’s also streamable,” he shared.

“I wasn’t involved in securing the distribution, but getting to talk about the movie is always a fun part of filmmaking. Letting people know the movie’s now out there has been great,” Keegan divulged. “We would have very much enjoyed attending (an in-person premiere), which we did for ‘Living Among Us,’ and have the camaraderie together. But that, of course, isn’t available to us right now.

“People now have access to watch the film at home, and see what we put together. Everyone’s work on he film is great. For me, being able to work with an icon like Mickey made me feel over the moon. It was a really wonderful experience, so it’s really great to finally share the the film,” the performer concluded. 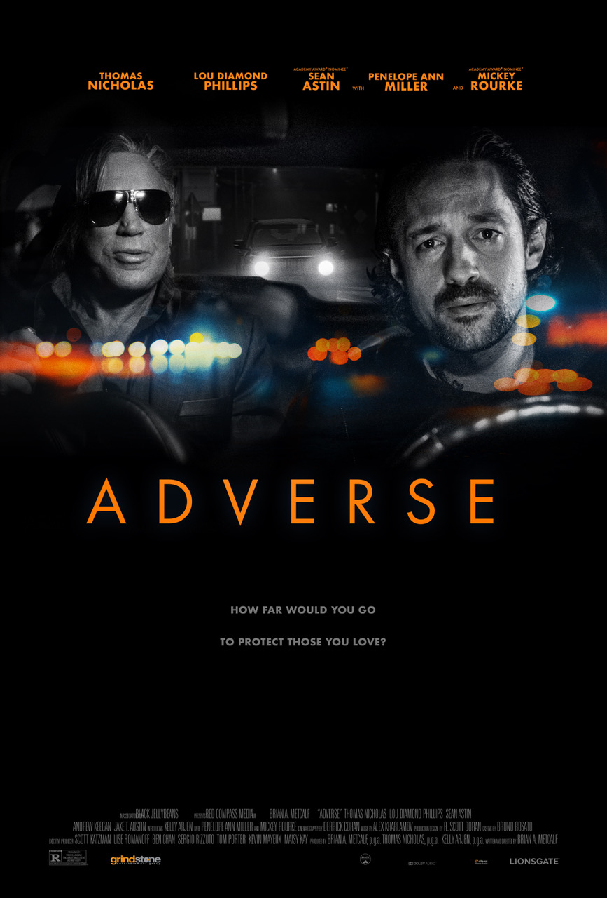