Feeling as though they’re finally old enough to maturely make their own decisions about what they want to do with the rest of their lives is a powerful coming-of-age journey that many young characters make in films. But the gripping new crime thriller, ‘Adverse,’ showcases how those teenagers and young adults aren’t as in control of their lives as they initially believe until it’s too late.

The movie’s main character, Ethan, who’s played by Thomas Nicholas, was in the same situation as his younger sister when he was her age, as the two both started spending time with people who brought them into dangerous situations. While she hasn’t seen the errors of her ways yet, he eventually came to regret the choices he made, and decided to straighten out his life. He tries to convince his sister that the decisions she makes all make have consequences. However, she doesn’t start to realize how much danger her life is now in until she finds herself in a situation she can no longer handle.

‘Adverse’ follows rideshare driver Ethan as he struggles to make ends meet and take care of his teenage sister Mia (Kelly Arjen). But when he learns that she and her boyfriend, Lars (Jake T. Austin), are deep in debt to drug dealer Dante (Brian A. Metcalf), Ethan’s life begins to spiral even more out of control.

When Mia then goes missing, Ethan discovers that crime boss Kaden (Mickey Rourke) is behind the act. In order to get close to him and take out his revenge for his sister’s increasing troubles, Ethan takes infiltrates Kaden’s operation by taking a job as his driver. Ethan then hunts down members of his new boss’ crew in order to wreak bloody vengeance as he prepares to confront Kaden himself.

Lionsgate is releasing ‘Adverse’ on Digital, On Demand and DVD today. The digital and disc distribution comes after the drama premiered in theaters on February 12 by Black Jellybean Productions. Metcalf wrote, directed, starred in and produced the film.

Metcalf generously took the time recently to talk about penning, helming and producing ‘Adverse’ during an exclusive interview over the phone. Among other things, the filmmaker discussed that the thriller’s story is based on a real-life experience he had with one of his ex-girlfriends, who got in trouble after becoming involved with drugs. He also shared that he enjoyed working with the rest of the actors, particularly in building their characters’ arcs and backstories together.

The conversation began with Metcalf explaining why he was inspired to scribe the script, and what the process of creating the story for ‘Adverse’ was like. “The story was based on a real-life experience. My personal experience dealt with an ex-girlfriend who got herself caught up with the wrong crowd and involved with drugs, which was the basis for the film’s storyline,” he revealed.

“Coming up with the film’s central theme during the writing process was very important. It’s ultimately about decisions that one person makes, and what happens as a result of those decisions,” the writer also shared. “So I knew that I wanted to take that initial storyline idea of what I had experienced with my ex-girlfriend, and also expand upon it.

“I also wanted to have several other different characters, and show what happens to them all when they’re all interwoven. So it was just the process of making sure they all connect in some way through the basic themes they all shared,” Metcalf added.

In addition to penning the screenplay, the filmmaker also appreciated having the opportunity to also direct the movie . He then delved into how working on the script influenced the way he approached helming ‘Adverse,’ and what his overall directorial style was like on the drama.

“What was interesting was that I basically had the initial idea of how the movie was going to look when I was writing the script. But then it completely changed when I was on set filming,” Metcalf revealed. “That was due to not getting all the locations or casting I wanted, lack of timing and other budgetary constraints. So I had to always be willing to change things around, as that’s indie filmmaking.

“It helps me as a director when during the writing process, I can visually see what I’m creating. I think, this is the shot I’m going to do. I try to get as close as I can to that later on when I’m on the set. But sometimes something else comes up, and I think, that’s even better!,” the helmer exclaimed.

Once Metcalf finished scribing the script, he cherished the opportunity to cast ‘Adverse,’ and described what the process of finding the actors and actresses who starred in the feature was like. He also shared why he decide to also star in the film himself.

“Interestingly enough, I didn’t initially intend to star in the role of Dante. I actually offered the role to three other actors, and no one wanted to play that character,” the performer revealed. “So eventually I said, ‘I’ll play the role myself.’

“In terms of the rest of the cast, it was amazing to get them. We had a great casting director (Bruno Rosato) who came on board to help cast the film,” Metcalf continued. “We also had different contacts who we reached out to, including my producing partner, Thomas Nicholas. So we did everything we could to get the cast that we had on board, and it was an absolute dream come true to get them.”

Once the rest of the actors were cast, the filmmaker also cherished having the experience of working with them to build the relationships between their characters. “The actors were all great; they all came in early so that we could talk about their characters. We had discussions about what kind of wardrobe they’d wear” he shared.

“For example, Mickey Rourke chose a lot of his own outfits. He and I also talked heavily about his character, and what he was basing him on, which was his brother, who was dying of cancer,” Metcalf revealed.

“It was an awesome opportunity. I was awe-struck to be able to work with these guys because I grew up watching them. Also seeing how professional and prepared these guys were for their roles, and how much time and energy they put into the project, was amazing,” the director gushed.

“We also had great discussions about their characters’ backstories, which weren’t necessarily in the movie itself. Sometimes they had more insight into their characters than what the audience may witness. They played into all of that really well,” Metcalf added.

Besides working with the cast on creating their characters’ backstories, the filmmaker also appreciated having the opportunity to work with the feature’s stunt coordinator, Garth Sodetani, to create the action sequences. “Each of the action sequences were planned, choreographed and shot differently. We have an action sequence inside a warehouse that’s this one long scene. I thought it would be better to be a single shot scene, as opposed to a bunch of cuts and edits, because that would get repetitious,” Metcalf shared.

“With some of the other scenes, we thought, this is going to be a different kind of action sequence, so we’re going to cut into different edits. Every scene was different, based on the tone and mood that we wanted to portray for the film,” the helmer added.

“We wanted to put the action scenes in different geographies and locations so that you know where they’re at. We also wanted to move into close-ups and quick cuts for the action scenes. So everything was planned differently, based upon the type of action sequence it was,” Metcalf added.

In addition to writing and directing ‘Adverse,’ the filmmaker was also heavily involved in producing the thriller. He admitted that even though it wasn’t initially his choice to also produce the movie, he eventually felt that overall, it helped him achieve his full creative vision as the scribe-helmer during production.

“A lot of times you have to produce and get your own project up off the ground in order to make it happen, especially for people who haven’t made a name for themselves as of yet,” the producer divulged. “If you don’t care about your project, nobody else will.

“Obviously, putting all of the pieces together is very important when you’re making a project. It’s either you doing the work yourself or no one doing it at all. So me producing this film was more of me having to do what I needed to do, rather than by choice,” Metcalf further admitted.

With ‘Adverse’ opening on Digital, On Demand and on DVD today, following its limited theatrical release last month, the director shared his thoughts on the feature’s dual distribution. “I personally love the movie theater experience, so it was important to us to release our film in theaters. Obviously, to also get it released on VOD and on DVD is also very important to help get it out there,” he noted.

“We knew we wanted to got with Lionsgate because with the way they’re able to market and release their films, we knew they’d be able to get this project out there. We knew they’d be a great choice for this, and they’re doing a fantastic job in what they do,” Metcalf gushed.

“We had multiple offers for the domestic distribution, but we knew Lionsgate was the best option to go with, based upon researching and working with them. We also worked with them in the past, so we knew that they’d be able to give this movie the justice we felt it deserves,” the filmmaker concluded. 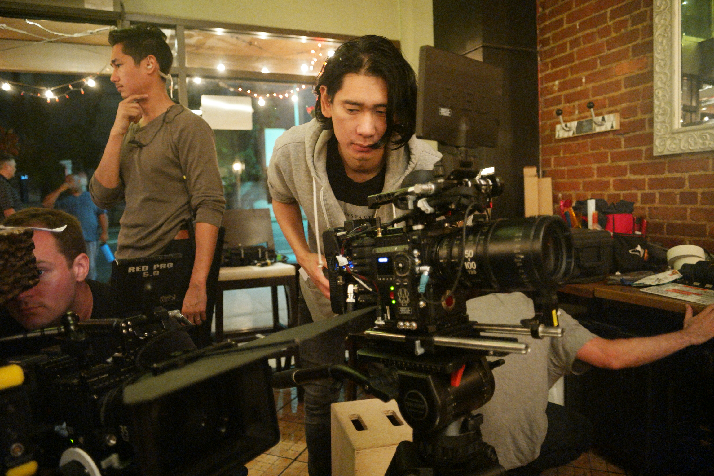