Fearless female leaders have been overcoming obstacles to lead the fight to liberate their country for centuries around the world. The title character in the biopic, ‘The Warrior Queen of Jhansi,’ courageously ushered in the the battle against the British Empire in the mid-1800s, in order to garner more freedom in her native India.

The action-adventure film, which tells the true story of the real warrior Queen of Jhansi, Rani Lakshmibai, was co-written by mother and daughter, Swati Bhise and Devika Bhise, along with Olivia Emden. The parent-child filmmaking duo also served as a producer and executive producer on the period drama, respectively. Swati also served as the movie’s helmer in her feature film directorial debut, and Devika also portrayed the title character.

‘The Warrior Queen of Jhansi’ tells the true story of the legendary Rani (the title Queen) of Jhansi), who was a feminist icon in India and a fearless freedom fighter. In 1857 India, the 24-year old General led her people into battle against the British Empire, which earned the reputation as the Joan of Arc of the East. Her insurrection shifted the balance of power in the region, and set in motion the demise of the notorious British East India Company, and the start of the British Raj under Queen Victoria.

The filmmakers generously took the time to talk about co-writing, directing and starring in ‘The Warrior Queen of Jhansi’ during an exclusive interview over the phone. Among other things, the helmer and actress discussed that by working together, they brought the historical importance of Lakshmibai to a contemporary audience. They also explained how they diligently worked to bring attention to the details of the stuntwork and costume design, in an effort to be historically accurate to the time period that Lakshmibai lived and fought in.

ShockYa (SY): Along with Olivia Emden, you co-wrote the script for the drama, ‘The Warrior Queen of Jhansi.’ What was the inspiration in bringing Rani’s story to the screen? What was process of penning the screenplay for the movie together?

Devika Bhise (DB): My mother knew the entire history of the story. She was a history major, and was able to do research in the local dialect that the primary texts are in in India. So she brought a real knowledge to what exactly happened, what part of Rani’s history she wanted to show, particularly the letters she wrote, and her relationship with the East India Company.

Meanwhile, I brought a contemporary, Western eye to the story. I looked into what else needed to be explained about the East India Company and Rani to a Western audience who might not know who and what they are, and everything that happened in 1857.

There was also talk about what artistic creativity we could add to the dialogue, in order to create humor, and show Rani’s emotions. So it was really a collaborative project, and we each brought a unique take to the table.

SY: Speaking of the research, what was the process of investigating Rani’s life for the biopic, and determining what information to include in its story?

DB: There are a lot of primary sources from the British characters’ lives from that time period. They wrote letters about Rani’s valor, bravery and courage. They described what she was like as a leader and warrior. So those were a lot of the texts that we drew on, especially to help me get into character, and understand who she was.

Swati Bhise (SB): But if we just drew on the British text, Indian audiences would have said, “This is not true to Rani’s story, and is inaccurate.” So I also drew from Majha Pravas’ 1890 travelogue, ‘Vishnubhat Godse,’ which was in the Indian language, Marathi. The travelogue chronicled how he traveled through India in 1857 and 1858, worked for Rani and witnessed the Indian Rebellion of 1857. The travelogue was later translated into English, and matched what the British said.

When we were questioned in India about how we could say certain things, I had to prove to everyone that what we included in the film was from this travelogue. I to cite things from historical texts to prove what I thought was obvious.

SY: Swati, you made your feature film directorial debut on ‘The Warrior Queen of Jhansi.’ How would you describe your helming style on the set of the drama? How did co-scribing the script influence your directorial style?

SB: I thought it was interesting that when you do the research and write the script, and then do the pre-production as the director, you have an advantage. I had my hands in every aspect of the production, which gave me a better understanding of how I wanted to showcase this story. With Devika playing the lead of Rani, and us being mother and daughter, I had a better understanding of what kind of acting she’s capable of doing. I also knew she was capable of doing the languages and martial arts.

I brought to the film excellent Indian actors who have a theater background, and similar styles of acting. So I knew it wouldn’t look jarring that we had two different styles of acting. I did give them direction, but then said, “Okay, you have your space, so bring it on.” That was great when you have wonderful actors like Rupert (Everett), Nat Parker and Derek Jacobi-they personified their roles as the characters. I didn’t want to see the actors, I wanted to see the characters, which is what I see when I watch the film.

SY: Speaking of the acting, Devika, you play the title character, Rani Lakshmibai, in ‘The Warrior Queen of Jhansi.’ How did working on the screenplay influence your performance?

DB: I think working on the script made it a lot easier for me as an actress to understand every single scene, and what we were going for, particularly their importance in the overall context of the film. So having a knowledge of everything that went into the writing of the script really helped me connect with the character.

Also being an executive producer on the film helped me realize how much money goes into making movies, and that every minute costs a certain amount. Time isn’t something that can be wasted.

So being involved in all of those aspects of the film helped me a lot as an actress. I think if more actors knew of the backend of what goes into making a film, it would help all of us.

SY: Swati, you mentioned the rest of the cast earlier. Once the actors were brought onto the project, what was the process of working with them to create the characters’ relationships and motivations?

DB: I think everyone cared about the rest of the cast, as well as the overall project. We had a lot of veteran actors, as well as some newer actors who had just finished acting school. Everyone worked incredibly hard, and brought their A game, because they were all passionate about the story.

SB: The casting was done without any middlemen, even in India; I did the casting by myself. We had casting directors who were wonderful; in London, we had John Hubbard. I told them who I was looking for, as well as that I had to have Derek Jacobi and Rupert Everett.

In India, I also told the (casting directors) who I clearly identified with. I had the budget to have bigger names in India, and a lot of people were being pushed to me. But I insisted on certain people, because they were fresh, and could easily deliver.

SY: With the adventure movie being driven by action sequences, what was the experience of also creating the stuntwork for the biopic?

SB: We had a second unit director, who was also the action director, Glenn Marks, and he was amazing. He worked with all of the actors who were doing a lot of the action work. Devika, of course, had a separate person, Marcus Shakesheff. Her training was with horses and martial arts, which was intense. Glenn and the team in Morocco worked with the horses, and they were all excellent. So we had a huge team who worked on the action in London, Morocco and India.

DB: It was an amazing experience to be able to gallop into battle. It was definitely a once-in-a-lifetime experience for me. The action sequences were the most fun things I’ve gotten to do in my career.

SY: Swati, you also worked as one of the costume designers on the film, along with Riyaz Ali Merchant and Vidhi Singhania. What was the process of creating the costumes for the drama?

SB: The costumes took 13-14 months to make. It wasn’t so much that I wanted to make the costumes, but I couldn’t find what I wanted. We tried to find costume designers, but they were mainly from Bollywood, so their ideas were glamorous and glitzy. So I realized that we had to go to the weavers, and create the costumes from scratch. I gave my friend Riyaz the colors and designs that I decided that I wanted from my research, and then we both decided on what kind of embroidery that we wanted.

DB: What was great was that I had to ride on horseback with these nine-yard, beautiful Sarees that were inlaid with delicate textiles that were made in gold and coral. So there was a part of me that was a bit terrified that I would ruin the costumes in the process of filming, but everything worked out beautifully. 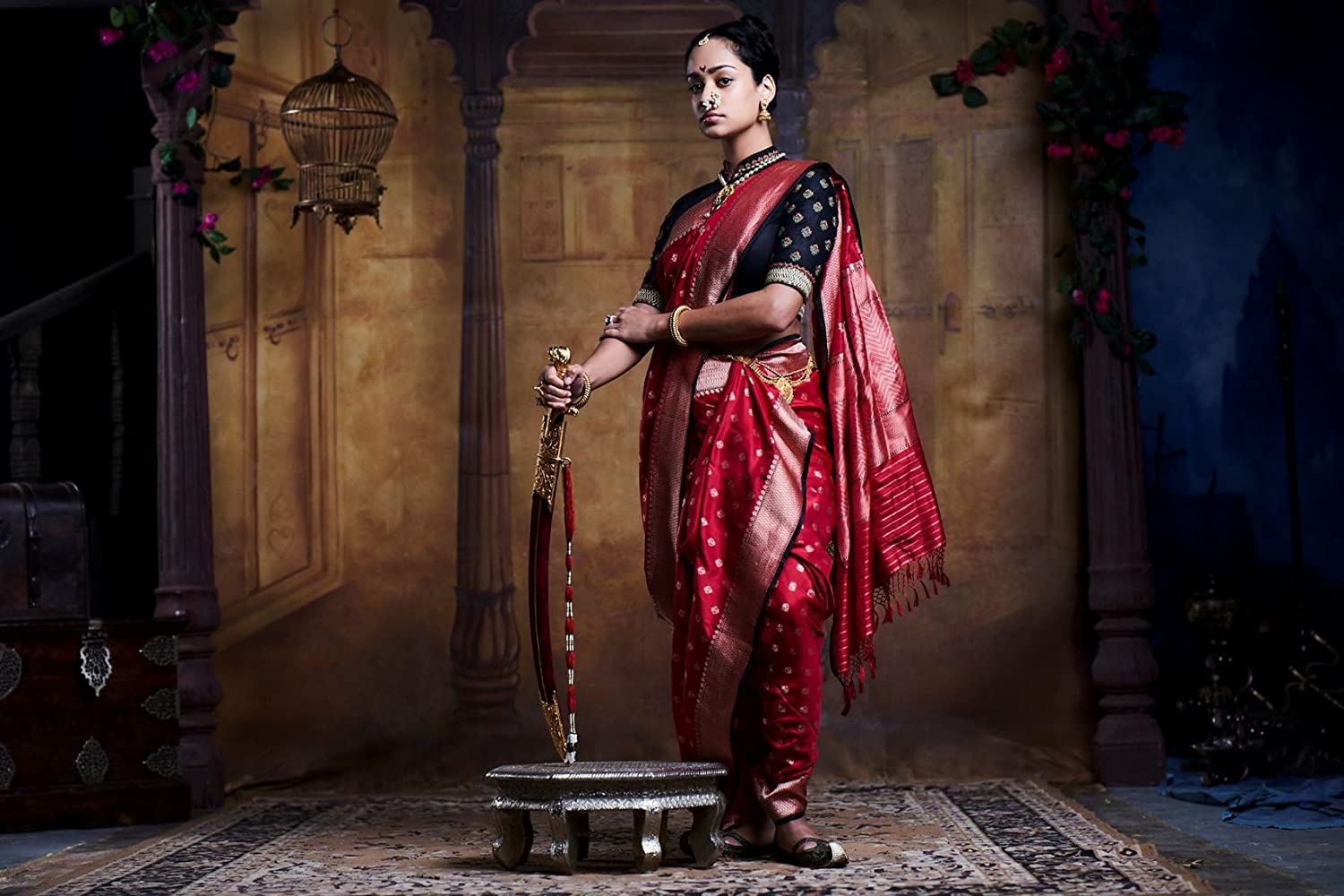