Offering veterans who are struggling to readjust to civilian life with the chance of finding a new purpose is one of the most valuable things society can do for the former soldiers. The new documentary, ‘Mustang Saviors,’ is powerfully raising awareness about what America can do to help veterans reacclimate to their former lives and culture, particularly in pairing them to work with the title horses.

David Glossberg made his documentary directorial, cinematography and producing debuts on ‘Mustang Saviors,’ which was written by fellow producer Kirk Demorest. The movie is now available to rent and own on North American digital HD internet, cable and satellite platforms, courtesy of Gravitas Ventures.

‘Mustang Saviors’ highlights how American veterans are committing suicide by the thousands each year, which is a national tragedy on an epic scale. But a remarkable treatment is proving more powerful than ever imagined: wild mustangs taken straight off the range. Pairing the horses with veterans is miraculously turning despair into enduring hope.

In honor of the film’s distribution, ShockYa is premiering an exclusive clip from the feature. The clip demonstrates how veterans who aren’t professional horsemen can make a connection with the wild mustangs. A team of veterans were given a group of horses to train, and ultimately auction off, during a rodeo.

Also in support of ‘Mustang Saviors’s release, Glossberg generously took the time recently to talk about directing, shooting and producing the feature during an exclusive video interview over Zoom. Among other things, the filmmaker discussed why he was inspired to make a documentary that chronicles how pairing the eponymous mustangs with veterans is miraculously turning the former soldiers’ despair into enduring hope. He also shared what his overall filmmaking approach was while he was making his documentary directorial, cinematography and producing debuts.

The conversation began with Glossberg explaining why he was inspired to make ‘Mustang Saviors.’ “A friend of mine needed a ride somewhere, so I said I would take him. I drove him to a horse place and got out of the car. I met the woman who was in charge. When she asked what I do, I told her I’m in film and television production,” he shared. “She then said, ‘You should do a documentary about this.’

“When I then took a tour of the facility, I met veterans who were working with wild horses that they said how saved their lives. So to hear a veteran say that made me think about how that ties back to me hearing about how 20 veteran commit suicide a day,” the helmer shared.

“So I thought, what can I do? It was one of those things that just tied together after that. So a couple of days after I visited the place, I made the decision to make a documentary about the subject,” Glossberg revealed.

The filmmaker then delved into how he went on to make his feature film directional debut with the documentary. He shared what his overall helming style was like while he was shooting the movie.

Glossberg noted that his directional style on the project “just unfolded; there wasn’t really a plan. I had experience doing one set of interviews for a piece that a friend needed a producer on. So I was able to do interviews on camera. I had also taken a six-week filmmaking class, so I was able to bring those skills to the interviewing process,” he shared.

“I wrote all of the questions and thought about what I wanted to ask in advance, so I developed a patter of what I was going to ask people. So I figured it out as I went along,” the director added.

Further speaking of setting up and conducting the interviews, Glossberg then delved into how he decided who he would speak with throughout ‘Mustang Saviors’ production. “The first set of interviews was set up by Bravehearts,” the Illinois program that matches the veterans with the wild mustang, he explained. “There were five veterans who I interviewed, and then two of the people who worked for the Bravehearts program. So they were selected and made available for me to interview.

“Over the course of two years, I was at the barn and filming B-roll. Then two of the guys were there, and I said, ‘Can we do an interview?’ Then it was later suggested that I interview other people. A couple of people didn’t necessarily want to be interviewed, though,” the filmmaker admitted. “Then after coming more familiar with me, there was a rapport and trust that was built, which led to some of the more passionate, in-depth interviews.

“There was another instance in which someone was going to be in town for training, and I was asked if I wanted to speak with him. So I raced out, and I think that was the first day I borrowed a camera to do the shooting myself, because nobody was available for me to hire to do it,” Glossberg also divulged. “From there, I
bought a camera and was a lot more flexible.”

Like the helmer mentioned, in addition to directing the film, he also served as the cinematographer. He discussed what the process of visually shooting ‘Mustang Saviors’ was like throughout the production.

“I tend to open the camera up and capture beauty, and that’s something I’ve been doing for awhile. I had a camera in college-I carried around a little Nikon, and was very active in how I would shoot and take pictures,” Glossberg shared. “So I think having that skill set from years ago helped me be more specific in what I wanted to frame for the film.

“I was drawn to get out of the car and take the sweeping shots of Montana,” the filmmaker shared. “The higher end cameras are more accessible now, so I was always able to have it with me.

“After awhile of not having a tripod, I was encouraged to get one and have it more readily available. So I had a steep learning curve over how to use the camera with the tripod and where to put it,” Glossberg revealed. “I had to also learn that what I got was what I was supposed to get. So it was a great and humbling process to do the filming, as well.”

Besides directing and shooting the documentary, Glossberg also served as a producer on the feature. He explained why he decided to also produce ‘Mustang Saviors,’ and how he balanced his helming and producing duties during the production.

“It was a lean outfit, so it was nothing too tremendous. I made the film with the cash flow of what I had at the time. When you work on television production, you work for a week, which affords to be able to do certain things. So between the time when a show I was working on was over, I’d take a weekend and fly out to the ranch, and then fly back again,” Glossberg revealed.

“So it was a piece-by-piece process that let me be able to afford to produce it. There were some personal sacrifices at times, but it was a natural process to decide to go and talk to someone,” the producer added.

“There was another producer who I worked with helped who me decide who I should speak with, as well. It was worth it to me as a producer to put in what I had at the time to get what I thought I should have for the film,” Glossberg added.

“We were able to get enough valuable footage over the years to include in the edit of the film. I worked with my editor (Kirk Demorest), and with his expertise, the film was crafted,” the filmmaker continued.

“For it to be now available in the Video On Demand market of the world is a really spectacular thing. I feel the film is an important investment to get the word out for veterans who need help, and can get that help by working with the horses. So making this film was the natural thing for me to do,” Glossberg concluded. 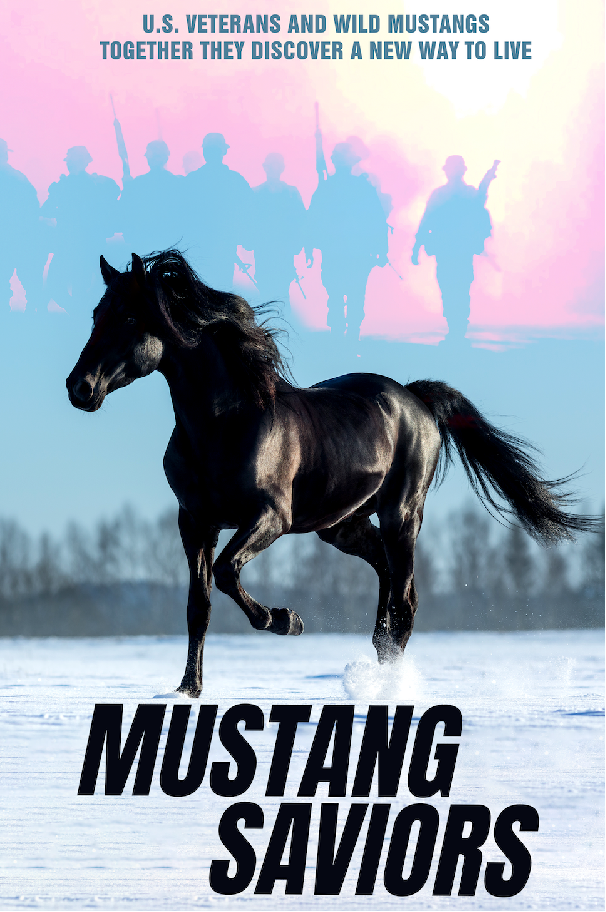