Sometimes the person who’s seemingly the least likely to take a courageous stance and cause havoc is actually the most qualified one to do so. The man society doesn’t notice proves to be the most dangerous of all in this spring’s acclaimed thriller, ‘Nobody.’

The film is now available for audiences to own on Digital, courtesy of Universal Pictures Home Entertainment. The drama will also be distributed on 4K Ultra HD, Blu-ray and DVD on Tuesday, June 22.

In honor of ‘Nobody’s Digital distribution, ShockYa is offering two lucky winners a digital download code for the movie. To enter, email us at ShockyaGiveaway@aol.com. Let us know that you’re entering to win the ‘Nobody’ digital download code giveaway in the email’s subject line and message. You have until Tuesday, June 22, the day of the thriller’s 4K Ultra HD, Blu-ray and DVD release, to enter, and you can enter the contest once daily. On June 18, we’ll pick the winners at random, and notify them through email. Good luck!

‘Nobody’ was written and executive produced by Derek Kolstad, who scribed the ‘John Wick‘ franchise. This year’s hit action film was directed by ‘Hardcore Henry‘ helmer, Ilya Naishuller. The drama stars Emmy Award-winner, Bob Odenkirk, who also served as a producer alongside Kelly McCormick. The movie also stars Connie Nielsen (‘Wonder Woman’), RZA (‘American Gangster’) and Christopher Lloyd (‘Back to the Future’).

‘Nobody’ follows Hutch (Odenkirk), an overlooked and underestimated father and husband, who willingly accepts life’s indignities. But when his daughter loses her beloved kitty-cat bracelet in a robbery, Hutch hits a boiling point no one knew he had. The pushover finally pushes back. Hutch turns from being a regular dad to fearless fighter by taking his enemies on a wild ride of explosive revenge.

The Digital, 4K Ultra HD, Blu-ray and DVD releases of ‘Nobody’ include exclusive bonus content, including deleted scenes; several featurettes, including ‘Hutch Hits Hard,’ which showcases how Odenkirk trained to bring his character to life; ‘Breaking Down the Action,’ which offers a behind-the-scenes look at the creation of the film’s set pieces for such scenes as the bus fight, home invasion, car chase and tool and die sequences; and ‘Just a Nobody,’ which offers a look at the personal beginning of the story for the lead actor, and the unique style and sensibility that Naishuller brought to the film. The bonus features also include a feature commentary with Odenkirk and Naishuller, as well as a feature commentary with just Naishuller. 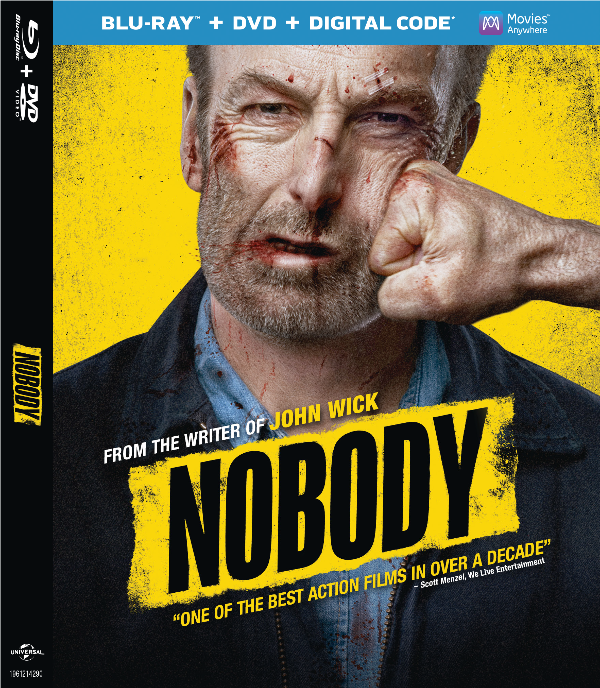