Learning to understand the motivations and emotions of someone who has committed violent criminal acts can be a daunting experience for anyone, even those who have professionally trained to study the full spectrum of the human condition. That’s certainly true for Special Agent Bill Hagmaier, who was part of the FBI Behavior Analysis Unit that launched in the 1980s, while convicted serial killer Ted Bundy contested his execution at Florida State Prison. Their complex relationship is highlighted in the new thriller, ‘No Man of God,’ which chronicles how the duo formed an unexpected intimate bond while Hagmaier set out to try to understand what inspired Bundy to resort to violence.

‘No Man of God’ distinguishes itself from other films about Bundy, as it doesn’t glorify him or his crimes. Instead, its story largely focuses on the Special Agent’s struggle to comprehend what made him different from the convicted murderer. The drama also focuses on the former’s dawning realization that he’s actually not that different from the latter, who’s portrayed as an insecure narcissist in the feature. As their relationship evolves, Hagmaier forms an unexpected connection with the man he’s studying, in an effort to better fathom the motivations of a serial killer. While he initially tries to fight it, the Special Agent eventually comes to realize that he has more in common with the convict than he initially wanted to believe.

Their unlikely connection leaves Hagmaier with the ethical dilemma of whether the prisoner he has come to know intimately should live or die. Like the Special Agent, ‘No Man of God’s viewers will likely be be left with a lingering feeling of unease as they also ponder the moral ramifications of deciding whether or not Bundy should be allowed to live, especially when in regards to honoring his victims.

‘No Man of God’ was written by Kit Lesser, and directed by Amber Sealy. The helmer felt it was vital to have a woman direct a movie about the moral ramifications of two men discussing the motivations of a male serial killer who targeted female victims.

‘No Man of God’ will be distributed in theaters and On Demand and Digital this Friday, August 27, courtesy of RLJE Films. The official release comes after the thriller had its World Premiere at the Tribeca Film Festival this past June.

Set in the mid-1980s, ‘No Man of God’ follows the relationship that forms between convicted serial killer Ted Bundy (Luke Kirby) and FBI agent Bill Hagmaier (Elijah Wood, who also served as a producer), after the former was sentenced to death by electrocution at Florida State Prison. In the years that followed their first meeting, Bundy agreed to disclose the details of his crimes, but only to Hagmaier, who he came to consider to be a close friend. The duo developed a complicated relationship while the convict was incarcerated, and tried to overturn his execution.

Sealey generously took the time to talk about directing ‘No Man of God’ during an exclusive interview over the phone during the Tribeca Film Festival. Among other things, the filmmaker discussed that after she read the script, she did her own research into the relationship between Hagmaier and Bundy, which included listening to the transcripts of the actual conversations between the two men, as well as speaking with the former Special Agent herself. She also mentioned that for the drama, she wanted to create a sober, intimate and psychological look into the convicted murderer’s story, without glamorize the killer or his crimes.

The conversation began with Sealey explaining what type of research she did into the real-life relationship between Bundy and Hagmaier. “There was so much research that went into the production. We not only researched the two main characters, but also the supporting characters; pretty much everyone you see on screen is a real-life person. So we also researched all of them, including watching TV shows and movies that feature them,” she shared.

“The script is based almost entirely on the actual recorded transcripts of the actual conversations between Bill and Bundy. So we listened to all of those recordings,” the helmer divulged. “The real Bill Hagmaier was also a great resource. I spent hours on the phone talking to him, and getting new ideas for the script from him.”

“On top of that, we came up with our own visual concept for the film, and did research on the color palates and shots,” Sealey added. She then further delved into what her experience of collaborating with the movie’s cinematographer, Karina Silva, was like throughout the production. She also mentioned how they decided how to visually tell the story, especially since the plot is mainly set in the room where Hagmaier and Bundy meet and talk.

“It was exciting to me that most of the story is set in one location. In a sense, it was the perfect film to make during the pandemic,” as it was shot late last year after the onset of COVID-19. “Since the story is limited in scope, we weren’t going to have a million different locations; we could have this one main location that we could block off and keep safe, and not have people coming and going,” the filmmaker pointed out.

“But I’m also a big believer that limitations can actually breed creativity…So I planned on the camerawork being a representation of their relationship, and how close they were. I planned the look, movement and lighting to be based on the relationship between Bill and Ted, and how close or far apart they were at any given point,” Sealey revealed.

“So we started with the cameras being much more still. We then moved into movements, and then have them almost merging as Bill starts to question if he’s anything like Bundy. He also questions what things make them different,” the director continued. “So it was fun to come up with camera movements that mimic their emotional states and their closeness.”

The visuals in ‘No Man of God’ help create the story’s sober, intimate look into Bundy’s story, which doesn’t glamorize the killer; it instead balances the emotional complexity and truthfulness of his crimes. Sealey shared why she feels it’s important to explore the psychological aspect of the relationship between Bundy and Hagmaier, instead of glorifying the killer’s actions.

“It was really important to me to show the emotional side of what was going on for Bill. I was very curious to find out what it was like for him to sit so close to someone who you knew had done these horrible things,” the filmmaker revealed. “Bill is a very religious, moral and good person, so in some ways, he wasn’t able to talk about that. I think that’s part of the reason why he does his job so well.

“Bill became friends with Bundy, and Bundy called Bill his best friend. Bill wouldn’t have said that he was his best friend, but that’s what Bundy thought. Bundy wanted to leave all of his belongings to Bill, but Bill refused,” the helmer revealed.

“Their relationship, and the emotional ramifications of that, was always fascinating to me. I tried to get as much of that in there as I could, without seeing much else of Bill’s life outside of the prison, which was another limitation that was placed on the film that I liked,” Sealey admitted.

“I thought, if we don’t get to see him with his family and in his everyday life, how can we show that Bundy had an effect on him? So we created a montage sequence to show that, which is driven by Elijah’s wonderful acting,” the filmmaker added.

“We knew that we wanted to have a theatrical run, so as soon as theaters began opening up, we said, ‘Great, let’s get in on this.’ We want theaters to survive, and our industry to thrive,” the director also shared.

“So we were riding the high of people feeling as though they can go out and be amongst people again. It’s exciting to be able to watch movies with other people in theaters. So securing this release has been pretty exciting,” Sealey concluded. 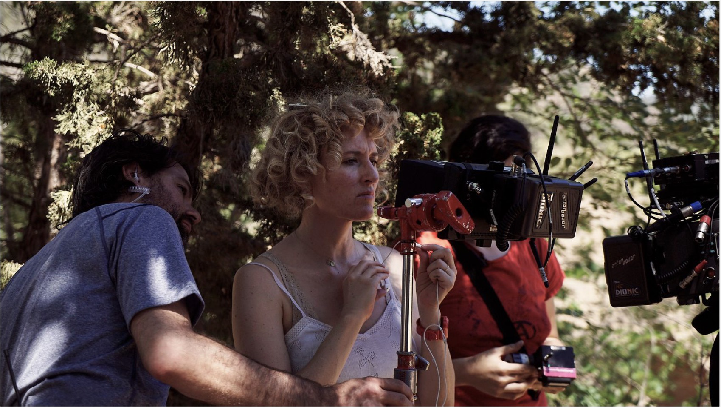