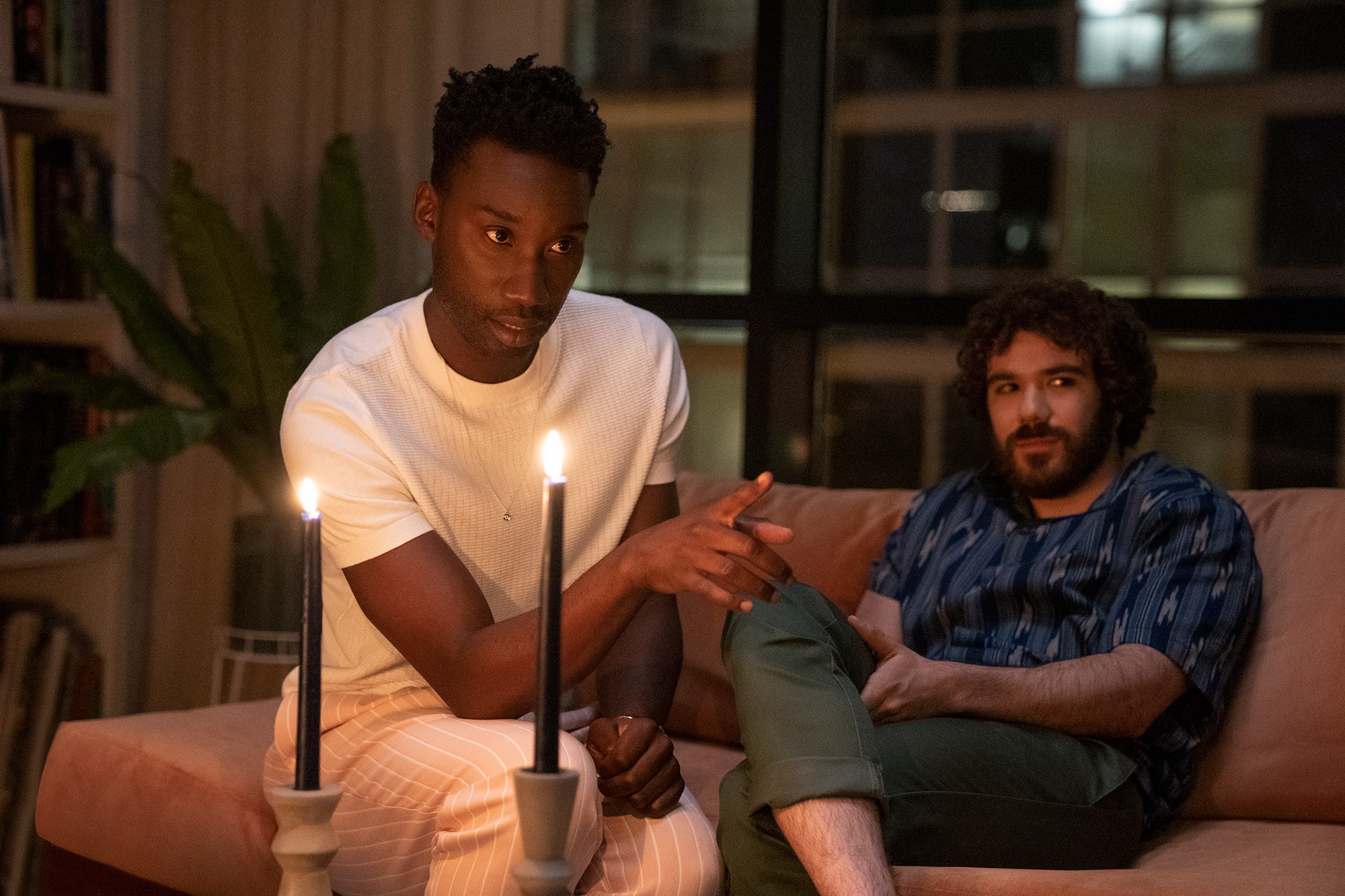 Sometimes a chance encounter and seemingly innocent conversation at a dinner party can inadvertently alter the course of a person’s life forever. That’s certainly the case for both actor Kyle Kaminsky and his character of Grady in the new supernatural horror movie, ‘Candyman,’ which Universal Pictures is releasing today in theaters. The thriller is serving as a contemporary incarnation of, and direct sequel to, the 1991 cult classic feature of the same name.

The new ‘Candyman,’ which is also acting as a reboot of the original film, was co-written by Jordan Peele, Win Rosenfeld and Nia DaCosta. Peele also served as a producer on the drama, which was directed by DaCosta.

While Anthony’s painting career is on the brink of stalling and he’s looking for inspiration, he hears about the legend of Candyman from Brianna’s brother, Troy (Nathan Stewart-Jarrett), and his boyfriend, Grady (Kaminsky), while they’re eating dinner together. In an effort to find encouragement for his work, the artist then begins looking into the story around the neighborhood, during which time he has a chance encounter with a former resident, William (Colman Domingo). William informs Anthony about the tragically horrific nature of the true story behind Candyman.

Kaminsky generously took the time recently to talk about starring in the new installment of ‘Candyman’ during an exclusive interview over the phone. Among other things, the actor discussed that he was motivated to audition for the role of Grady after he attended a dinner party with DaCosta, and she encouraged him to submit a screen test, as she felt his personality fit the character’s arc. He also mentioned that he enjoyed working with both the filmmaker and his co-stars, particularly Stewart-Jarrett, as he feels that they’re both naturally brilliant in their respective work.

The conversation with Kaminsky began with him explaining how he became involved in playing Grady in the thriller. “I had quit acting after a couple of screen tests for some projects after being in L.A. for awhile. Then about a year later, I was at a dinner party with Nia and some mutual friends, and didn’t think anything about it,” he revealed.

“My friend had told Nia that I used to be into acting, as she was casting this movie, and she said, ‘Oh yes, I remember him,'” the actor continued. “She then emailed me and asked me, ‘Are you still acting? We’re trying to cast this role, and I’d love for you to submit something to my casting director, and if she likes it, we’ll go from there.’

“So one thing led to another and I got the audition, and then when I got the call-back, I flew to Chicago for a screen test. Later that night, I found out that I was cast in the movie,” Kaminsky revealed with a hint of a laugh. “So acting was brought back into my life in an amazing way.”

Following up on his experience working with DaCosta as the helmer on ‘Candyman,’ the performer further delved into what the experience of collaborating with her was like throughout the shoot. “First and foremost, it was an honor to work with Nia. She is a visionary and legendary director who will be around for generations. I’m so excited for the world to see what she’s creating because it’s so special,” he gushed about the filmmaker.

“Nia is an incredible director who makes actors feel very welcomed and comfortable, and allows them to bring the choices they’ve been working on to set and explore their own creativity. She’ll also give them directions if she wants any changes,”
Kaminsky continued.

DaCosta “has such a specific voice for what she wants, but she also wants it to be a collaborative process. A lot of directors don’t do that,” the actor revealed. “So I was so relieved when I got on set and she was so open to doing a bunch of different takes and exploring what that looks like.

“In being open to the creative process, she just makes actors feels so at home. That’s not something that you find very often in a director, let alone having such a specific vision of what she wanted for the film. It was inspiring to be around,” Kaminsky admitted.

Further delving into what the experience of DaCosta allowing him and his co-stars to bring some of their own ideas to the set was like, the performer noted that he enjoyed exploring his thoughts with Stewart-Jarrett as they built their characters’ romantic relationship. “Nathan and I met a couple of times to build up our (characters’) relationship. We talked about their background and history, so that when we got to set, the characters seemed very lived in, and that was a really important part of the process.

“Nia also gives such specific directions when you’re on set. So it was great to be able to explore with everyone, and that was a really important part of my journey to work with her and Nathan,” Kaminsky continued.

“Nathan is a brilliant actor. He made me laugh so much that it was hard to stop laughing while I was on set. He made me feel so comfortable, and like I said, he’s incredibly talented. Feeding off of his energy inspired a lot of the choices that I made,” the actor added. “Feeling like you’re a part of a team that has the common goal of creating a really beautiful project was amazing.

Following up on the fact that the film interweaves humor with the issues of modern society and physical scares, Kaminsky noted that he truly embraces that element of the film. “Nathan’s character is so funny, and my character is grounded and easy going, and that provided a give-and-take that helped elevate the humor in the movie. Those contrasts were also what brought us together, and feed into our (characters’) relationship,” he shared. “So I really did enjoy the humor, and how it was able to fit into the horror elements in the film.”

Aside from the moments of humor in the story, “I think that all of the issues that this film deals with are really important. It’s so much more than a horror film; it’s a really powerful story that everybody needs to see. Nia did a brilliant job interweaving all of that into this movie,” the performer divulged.

“I’ve never see a horror film that I can laugh, cry and scream consistently throughout the entire story like this one. Like I said, Nia is brilliant, and I’m so glad to be a part of this project,” Kaminsky added.

Like the actor mentioned earlier, ‘Candyman’ was shot on location in Chicago, where the story is set. He added that he enjoyed the overall experience of filming the drama on location.

“I liked that I was able to go back to Chicago as an adult because I grew up there, but I moved away to go to college, and then moved to Los Angeles right after that,” Kaminsky divulged. “So having the opportunity to return and see Chicago through a different lens by exploring it in a way I never have before, was incredible. To also tie that in with shooting a movie that was one of the best moments of my entire life was an amazing experience.”

With the drama being a direct sequel to the original 1992 feature, the performer also cherished having the opportunity to maintain the integrity of the first film, while also showcasing the contemporary issues of modern society. “I think Nia’s vision for the film not only honors the original, but also creates this brilliant new story that weaves into the cult classic. So I’m really excited to see what fans of the original think of this new film, and for them to witness the brilliance that Nia has brought to screen.

“I’m still buzzing about it, and am in awe of it, because I saw it for the first time” the night before the interview, Kaminsky divulged. “I was riding a high until about 3 or 4 in the morning from just pure joy. So I hope that everyone who was a fan of the original movie enjoys it,” he concluded.