**SPOILER ALERT** The below interview contains spoilers about the identity and arc of actress Vanessa Estelle Williams’ character in ‘Candyman.’

Parents are often driven by the natural instinct to protect their children from exploring life’s most macabre details, so that they don’t embark on their own dangerous collision course with destiny. That’s certainly the case for actress Vanessa Estelle Williams’ iconic character of Anne-Marie McCoy from the 1992 cult classic gothic horror film, ‘Candyman.’ The performer is reprising the infamous character in the movie’s new direct sequel of the same name, which Universal Pictures is releasing in theaters today.

Anne-Marie, who began to believe in the title urban legend as a young woman while she lived in Chicago’s Cabrini Green neighborhood, is the estranged mother of the new supernatural horror thriller’s protagonist, Anthony. After he inadvertently hears about Candyman from his friends, his mother finally tells him the horrific details about her experience with the villainous title legend in the original film, in an effort to protect his life.

The new ‘Candyman,’ which is also acting as a reboot of the original feature, was co-written by Jordan Peele, Win Rosenfeld and Nia DaCosta. Peele also served as a producer on the movie, which was directed by DaCosta.

While Anthony’s painting career is on the brink of stalling and he’s looking for inspiration, he hears about the legend of Candyman from Brianna’s brother, Troy (Nathan Stewart-Jarrett) and his boyfriend, Grady (Kyle Kaminsky). In an effort to find encouragement for his work, the artist then begins looking into the story around the neighborhood, during which time he has a chance encounter with a former resident, William (Colman Domingo). William informs Anthony about the tragically horrific nature of the true story behind Candyman.

Williams generously took the time recently to talk about reprising her role of Anne-Marie in the new installment of ‘Candyman’ during an exclusive interview over the phone. Among other things, the actress discussed that when she heard that there was going to be a new entry in the franchise, she hoped there would be a place for her character in the story, and then the filmmakers informed her that they wanted to feature her in the feature as Anthony’s mother. The performer also praised DaCosta on how well she executed her vision for the thriller, and how privileged she feels to have worked with such a brilliant actor as Abdul-Mateen.

The conversation began with Williams discussing why she was interested in reprising her role of Anne-Marie McCoy in the new sequel. “Well, I got the original film the traditional way of auditioning, and it was pivotal because it was only my second film,” she shared.

The first ‘Candyman’ “was also the first job that I booked when I came here to L.A. to check out whether I was going to stay here for any significant time, as I was a die-hard New Yorker and theater actress on Broadway,” the actress also revealed. “But I thought, okay, I’ll give L.A. a try, and they welcomed me with that film and my subsequent work.

“I then heard that Jordan Peele was working on this film, and I’m a huge fan of all of his work, in both comedy and horror. So when I heard that he was going to have something to do with the ‘Candyman’ reboot, I thought, I hope they call on some of us survivors of the original film,” Williams also divulged.

“At the same time, my agent got the call saying ‘Yes, we want Vanessa, and this is how we’ll use her in the film,'” the performer continued. “When I then read the script and saw that the entry point into this new incarnation of the story was through Anne-Marie’s son of Anthony, I thought it was genius and brilliant. The script delivered on all of my expectations.”

Further speaking of Peele, Williams shared that she wasn’t able to directly work with the Oscar-winning screenwriter while she was bringing his incarnation of Anne-Marie to life in the new installment of the ‘Candyman’ series. “When Jordan, along with Win Rosenfeld and Nia DaCosta, were working on the film, I unfortunately didn’t have the chance to met or work with Jordan. I also didn’t have the chance to meet with him during my days on the actual set, as the film was directed by Nia, so my direct work on the film was with her,” she noted.

“But the roadmap we used was the wonderful script that they all crafted. That was the extent of my work with Jordan,” the actress added.

“The on-set producer, Ian Cooper, was wonderful and amazing. He was supportive and marvelous to work with,” Williams also noted. “But I also look forward to having a face-to-face with Jordan. Not being able to meet him, and work with him one-on-one on this incarnation, was the fall-out from the pandemic.”

Following up on what the experience of working with DaCosta on the new ‘Candyman’ was like, the performer called the process “fantastic. She’s so smart and informed, and was so clear about her vision. I felt safe and like I could trust her. She helmed a ship that was conducive for our best work,” Williams shared.

“I prepared after she and I spoke about the character during our meetings together. We were on the same page with Anne-Marie’s history, as well as her ability to survive the trauma she lived. We also spoke her economic trajectory living as a nurse’s assistant, which allowed her to climb out of her Cabrini-Green existence, and level up to some degree,” the actress also noted. “Nia’s vision and knowing exactly what she wanted gave us such peace, and inspired everyone to be on their A game and bring their best.

DeCosta “was also so collaborative in the way that we worked, in terms of crafting a scene, and deciding what our physical language would be. We discussed if Anne-Marie would keep close to her son and check out how he’s changed physically, knowing that he’s been exposed to what she’s worked all her life to protect him from,” Williams continued.

“We also discussed how I would convey that to him, and also explain to him why I had to lie. We talked about if I would take a breath and a little space, so that I could respect his space while I explain to him what was going on. That way, I could then go to him and nurture him,” the performer also shared

“I was pleased that all of those specific things worked so well. I was right to trust what Nia was suggesting and encouraging me to do in that scene,” Williams admitted.

“I was also privileged to have worked with such a great actor as Yahya, and have him as my scene partner. I got to work off of all his energy and the emotional impact of what was happening to him in the scene. It was so gratifying and satisfying,” the actress gushed about her co-star.

“This is the kind of role and experience that an actor really lives for. You pray to be able to work with such high caliber collaborators,” Williams added.

Another aspect of the production that the performer enjoyed was being able to shoot her scenes for the new drama on location in Chicago. “I love filming on location, and I love Chicago; it’s one of my favorite cities. I’m a New Yorker, so I love fast-moving cities. Chicago’s like a small-town city, so it still has all the big city elements, like good places to eat and the temperament of New York, as well as all the culture and hometown feeling of the Midwest,” she noted.

“I didn’t film in Chicago for the original film, but I got to travel there, which I thought was really generous of (the original ‘Candyman’s writer-director) Bernard Rose and the production. They were nice enough to fly me out to meet the woman Anne-Marie was based on,” Williams continued.

“I was also able see her apartment in Cabrini-Green. It’s very daunting; it looks like a prison from the outside. You then walk into this oasis that is her home, and it’s orderly, bright, beautiful and bright,” the actress also shared.

“Then when I walked onto the set in Los Angeles, I was amazed at how much they were able to recreate all of that. I knew that having experienced it that it was right on the mark,” Williams added.

“Then being in Chicago to film this incarnation of ‘Candyman’ felt like I was coming home in many ways. Like I said, it’s such a great city, and nurtures the artist in you,” the performer pointed out.

“So to be on location in another space that was an actual, practical apartment allowed my imagination to inject everything my mind had been working on into these new surroundings. It allowed me to connect to what I imaged is Anne-Marie’s life. It was so satisfying in how it brought everything together, and I’m glad how everything came all together,” Williams concluded. 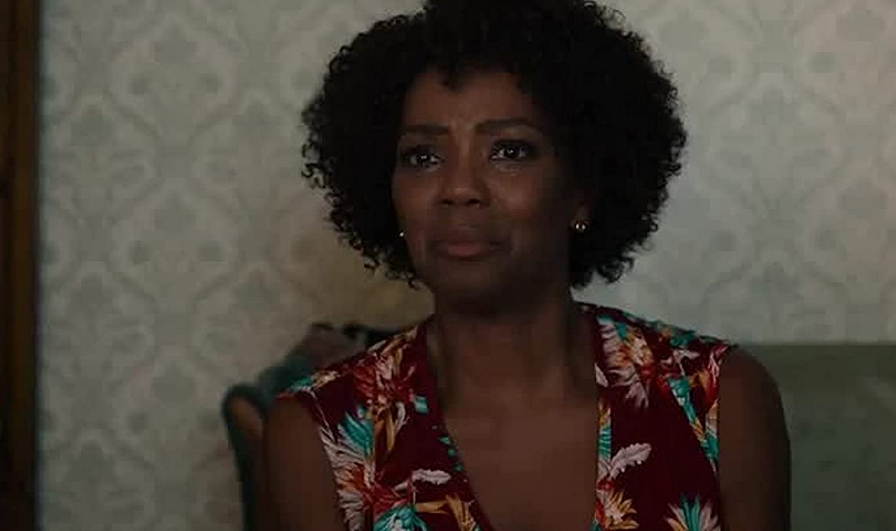