The seemingly most stable relationships often times make the most delectable to explore on screen. The underlying dynamics between the couple become increasingly precarious as their secrets are inadvertently revealed, which ultimately creates a hauntingly atmospheric conflict. That’s certainly the case for Golden Globe Award-nominated actress Rebecca Hall’s protagonist of Beth and her recently deceased husband in the new supernatural movie, ‘The Night House.’

The psychological thriller, which was written by Ben Collins and Luke Piotrowski, was directed by David Bruckner, who garnered acclaim in the horror genre with 2017’s ‘The Ritual.’ The captivating new story the filmmakers created enthrallingly explores the haunting themes of lies, deception and grief through Beth, who navigates a labyrinth of secrets that are connected to her late husband and the place she calls home.

‘The Night House’ is now playing in theaters, courtesy of Searchlight Pictures. The mystery drama’s official release comes after it had its world premiere at last year’s Sundance Film Festival.

‘The Night House’ follows upstate New York schoolteacher Beth as she’s reeling from the recent-and unexpected-suicide of her husband of 14 years, architect Owen (Even Jonigkeit). Left alone in the lakeside home he built for her, she tries the best she can to keep her life together, even though she was completely blindsided by his death; as far as she knew, she was the only one in their marriage who suffered from depression.

Driven by her initial anger that her husband took his own life, Beth decides to delve into the secrets he was keeping from her that prevented him from talking to her about his pain. Her investigation is questioned by the people who care about her, including her colleague Claire (Sarah Goldberg) and neighbor Mel (Vondie Curtis Hall), but she rebuffs their offers of support.

Beth’s feeling that she was abandoned by Owen slowly starts to dissipate when she begins having mysterious dreams at night. The dreams are accompanied by disturbing visions of a presence in the house that’s calling to her. The dreams and visions compel her to start digging further into her husband’s belongings and digital history. What she ultimately finds are shocking revelations involving his secretive belief in the occult, which leaves her with more questions about the live he was leading while he was still alive than answers.

Hall generously took the time recently to talk about starring in ‘The Night House’ during an exclusive interview over Zoom. Among other things, the actress discussed that she was drawn to play Beth in the movie because she thought the script was brilliantly written, and features a well-crafted backstory and character arc for the protagonist. She also praised Bruckner’s work on the thriller, as she feels he’s committed to the technical and emotional aspects of creating well-developed genre features.

The conversation began with Hall explaining why she was interested in playing Beth, and how she became attached to star, in ‘The Night House.’ “It was fairly straight forward. I got sent the script. I think the cover letter that came with it had a one-sentence explanation of the story, like ‘Woman haunted alone in house.’ I think I probably did a slight eye roll and thought, we’ve seen this movie a gazillion times,” she revealed.

“But then I read the script, and was sold on it by about page 20-something, **SPOILER ALERT** when she has the scene with the parent in the high school about the grades. I was aware that the scene was really expositional, and Beth was telling the parent stuff that needed to be heard,” the performer divulged. **END SPOILER ALERT**

“But I thought it was brilliantly written, and revealed so much about the character. It immediately communicated her to be quite funny, but also quite dark and confrontational, which are all the things that you’d expect from a person who’s in a state of shock when their world is upended,” Hall also shared.

“She wasn’t sitting around in corners, weeping into handkerchiefs. The point of the film is that she can’t cry about it yet; she has to go on the journey in the film in order to cry about it,” the actress admitted. “I thought that was really interesting, and that’s what made me fall in love with her as a character, and be sold on the film. So I called up and said, ‘Yes, please, I’ll do it.'”

Throughout the film, Beth tries to keep her life together after Owen’s recent death, but also faces nightmares, as disturbing visions of a presence in their house keep calling to her. While her nightmares and visions have a supernatural element to them, her grief is also realistic and relatable, and it leads her to be impulsive at times.

Hall then delved into how she maintained her character’s emotional mindset as she tackled her grief, which is in part driven by the supernatural elements that are in her home, throughout ‘The Night House’s production. “I really enjoyed that process. I thought a lot about the moment of grief that she’s in, which is quite a specific moment that you don’t see all that much in films,” she pointed out.

“You often see the moment in films when the characters are going to the funeral and the immediate grieving. You also see films where they’re three months down the road, and they’re trying to put their life back together again,” the performer also noted.

“But I can’t think of a movie where they’re back home after the funeral, at the moment when everyone stops calling, but their life is in no way back to normal, and they can’t even think about it going back to normal. They’re still in a state of shock, and it’s a volatile place to be, as there’s a lot of anger,” Hall further divulged. “So I thought about that quite a lot.”

Besides developing Beth’s emotional arc, the actress also enjoyed the process of creating her character’s physicality, especially as she begins to delve into the supernatural elements of Owen’s life. “I really loved that and surprised myself. I haven’t done a lot of stunts and physical stuff, but this was so specific and interesting,” Hall revealed. “But a lot of it was very controlled by stunt safety.

“But there was a large chunk of it that was also improvised. **SPOILER ALERT** With the first fight in the scene in the bathroom, David said to me, ‘Imagine that you can touch him, and that he pulls your hair.’ I was essentially just flinging myself around, as there wasn’t anything else to respond to; there wasn’t a guy in a green suit who got edited out later on,'” the performer revealed.

Hall added with a laugh, “It was very loose in many ways. I probably looked a bit dumb at times, but I was willing to do that.” **END SPOILER ALERT**

Further speaking of the improvisation that was done on set, the actress shared that there was a bit of improv done throughout the shoot, in terms of both the physicality and dialogue. “There was definitely freedom to do what I needed to do in the moment, and David was very open to letting me explore. I didn’t do that a lot of the time with the dialogue because it was very well written. But there definitely were times when I felt something and let the improv happen,” she shared.

Also further speaking of Bruckner, Hall delved into what was her experience of collaborating with him on building Beth’s character arc was like throughout the drama’s production. “I found him to be really fascinating. His commitment to the genre of horror is really interesting. He staked out that this is the thing that he’s going to perfect in life, and he’s only interested in doing that. He’s so precise and has technical understanding of what created a jump scare and what the audience needs, and that was all very carefully mapped out,” she revealed.

“When it came to me, he allowed me a lot of freedom, which was a remarkable contradiction to how carefully he planned out the shots. So I loved working with him and think he’s brilliant, and well on his way to owning the genre,” the performer also gushed about the director.

Besides enjoying her time working with Bruckner as ‘The Night House’s helmer, Hall also embraced the working relationships she developed with her co-stars, particularly Jonigkeit and Goldberg. Hall shared what her experience was like of collaborating with the rest of the cast throughout the production, in order to build their characters’ relationships.

“Evan and I didn’t shoot too many flashback scenes together, so it was a funny thing to try and create this relationship mostly in imagination,” the actress revealed. “He had a very difficult role, and I don’t want to spoil anything about what his character goes through at the end of the film. There are many interpretations of this film, and it fell on Evan to hold those possibilities and interpretations, especially towards the end,” she added.

“I also loved working with Sarah Goldberg, and **SPOILER ALERT** that in this movie, Beth needs someone to come and help her, which turns out to be Sarah’s character in the end. I love that Beth’s girlfriend ends up helping her at the end, and it’s not a guy. I thought that was a pretty interesting depiction of female friendship, and it’s pretty rare to see in movies. So it was great to work with Sarah and show that side of their friendship in the film,” Hall concluded. 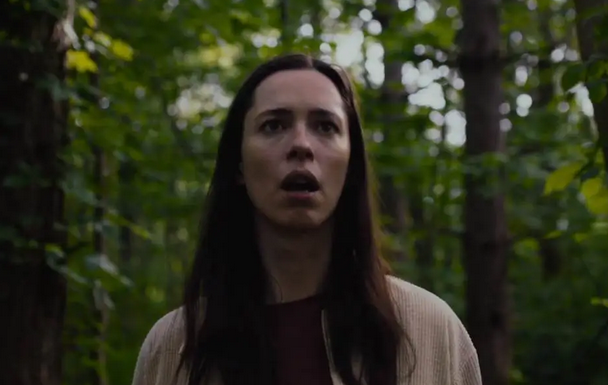