Taking the time to truly get to know someone before forming an in-depth opinion about them is a powerful real-life message that the entertainment industry is finally embracing while storytellers craft their latest narratives. Acclaimed documentarian, Frida Kempff is proving what a vital voice she is in the movie industry with her feature film directorial debut, ‘Knocking.’ The new thriller is an all-too-important genre entry that smartly relies more on the realities of gaslighting, particularly towards women, than gore in order to raise alarm and panic amongst viewers.

The drama, much like the short novel it’s based on, ‘Knockings’ by Swedish genre author Johan Theorin, highlights how in modern society, women are often judged by their appearances. Kempff immediately connected with the main character of Molly in the story, who’s being faced with distrust and prejudice from her new neighbors, who barely know her.

The filmmaker ultimately decided to make her feature film directorial debut with the screen adaptation after she read the movie’s script, which was written by Emma Broström. Much like the short story, the screenplay chronicles how the protagonist is deemed to be an untrustworthy person because of her background and actions, which are driven by the fact that she becomes convinced that she has witness something terrible, even though no one believes her.

Since Molly is being marginalized and isn’t given the same rights as everyone else in society because of who she is, Kempff wanted to create an entry in the genre that’s different from what the audience is used to seeing on screen. Instead of making a typical slasher film, she thought it would be more interesting to encourage the audience to view the world from Molly’s perspective, and raise concern in society if something is really wrong.

‘Knocking’ follows Molly (Cecilia Milocco) as she’s released from a psychiatric hospital, where she spent time as a patient after she experienced a traumatic incident. She moves into an apartment building and tries to settle into a new routine that will help her remain healthy. However, her newfound freedom and stability are quickly called into question when she begins to hears knocking, which is coming from the ceiling in her new apartment.

Unable to live with the constant noise, Molly begins to search for the source. When she visits her upstairs neighbors to ask if they know where the knocking’s coming from, they tell her they can’t hear the banging sounds, and dismiss her with indifference. As a result, she initially ponders if the noise is just in her mind, as she’s still processing the traumatic event that led to her stay in the hospital. But as the knocking then intensifies and eventually begins to be accompanied by a woman’s cries, Molly becomes obsessed with finding out the truth, including if someone is trapped, and why no one else doesn’t seem to care about what she’s hearing.

The thriller had its virtual world premiere this past Saturday night, January 30, in the Midnight section at the 2021 Sundance Film Festival. It then had its second screening on Sunday morning, January 31.

Kempff and Milocco generously took the time recently to talk about directing and starring in ‘Knocking’ during an exclusive interview over Zoom. Among other things, the helmer and actress discussed why Kempff was inspired to make her narrative feature film directorial debut with, and what drew Milocco to play Molly in, the drama; how having Theorin’s book as the source material influenced their preparation for showcasing Molly’s journey; how the movie is a sharp indictment of the gaslight culture and social stigma that work against those experiencing mental illness; and what the experience has been like of bringing the thriller to the Sundance Film Festival.

Watch our exclusive video interview with Kempff and Milocco about ‘Knocking’ above. 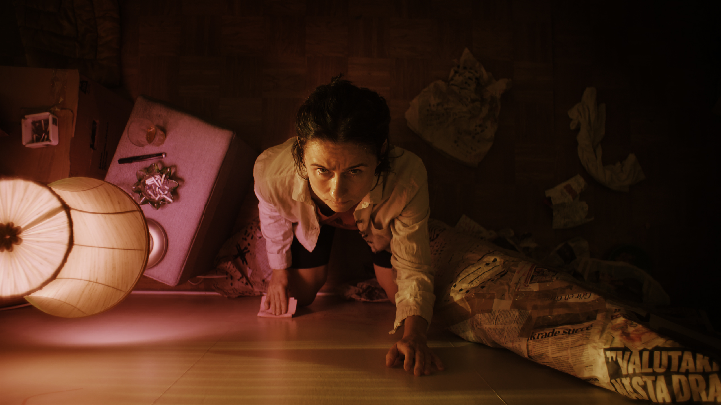