Embarking on an emotionally-driven, insightful journey in order to mature and grow is a powerful, tantalizing message of the new intimate drama, ‘The Wheel.’ Written and produced by Trent Atkinson, the profound, visceral movie went on to be directed and produced by Steve Pink, who’s known in part for helming the ‘Hot Tub Time Machine’ series. The tonal departure in Pink’s latest feature, which played in the Contemporary World Cinema section at last month’s Toronto International Film Festival (TIFF), emotionally and enthrallingly explores the raw, vulnerable journey of how a traumatized young married couple learns to navigate the process of grow up without growing apart.

‘The Wheel’ follows Walker and Albee (Taylor Gray and Amber Midthunder, who both also served as producers) after they quickly became inseparable as pre-teens when they were met in a children’s group home. When they later married at the tender age of 16, Albee was rescued from her rough foster family. It’s now eight years later and they are on the brink of divorce, despite being the only family either of them has ever known. Walker hopes that a mountain Airbnb getaway spent doing the practices in a relationship self-help book will save their floundering union. But aspiring performer Albee doesn’t share his optimism and good intentions.

Albee’s behavior becomes increasingly alienating over the weekend, as she mocks their newly engaged Airbnb hosts, Ben and Carly (Nelson Lee and Bethany Anne Lind), and makes scathing public dissections about Walker’s personality. Albee also mocks the rental’s affected pastoralism, in an effort to avoid discussing her true feelings and working on her disintegrating marriage. Walker must decide if his wife’s vicious performance is really hiding a desire to merely shake him out of his rose-colored view of her or to completely sever the ties that bind them. Meanwhile, Ben and Carly are drawn into the younger couple’s personal drama and attempt to intervene in ways that create, or perhaps reveal, the problems in their own relationship.

Pink and Gray generously took the time during this year’s TIFF to talk about directing and starring in ‘The Wheel’ during an exclusive interview over Zoom. Among other things, the filmmakers discussed the elements of Atkinson’s script and the overall project that convinced them both to become involved in the feature. The duo also delved into what the experience was like of shooting the drama last summer in the mountain during the height of the COVID-19 pandemic, and how that experience influenced the way they rehearsed with the rest of the cast.

The conversation began with Pink discussing why he was interested, and how he became involved, in helming ‘The Wheel.’ “I met the producer, Josh Jason, while we worked on commercial production together. Josh was actually working as a PA (production assistant), and we struck up a good relationship, as I saw that he was a guy who could do more than just get you coffee. He was a young, aspiring filmmaker, which was really evident,” he shared.

“So we discussed the movies that we like and wanted to make. Then one day he handed me the script for ‘The Wheel,’ and I read it and thought it was brilliant and beautiful,” Pink gushed about the screenplay.

The director added with a laugh, “Part of the joke for me was asking, ‘You’ve seen my IMDb, right? So I’m not sure that you want to hand me this script.’ But it was nice that Josh trusted that I could deliver ting that he had never seen anything be delivered on, which included the naivety of youth.

“He then put the film together with Taylor and Amber. We then went off last summer up to the forest outside of Los Angeles, and spent 30 days in a bubble with about 20 of us and made the film,” Pink added.

Gray then delved into how he became attached to, and why he was interested in, playing Walker in the movie. “To piggyback off of what Steve was saying, the linchpin for me was Josh, the producer. We had come together over another script pre-COVID, I believe. COVID silenced the industry for a bit, so we were just hanging out and talking about this other script one day, and also talking about films we like and could possibly make during COVID,” he shared.

“He then brought up ‘The Wheel,’ and said, ‘I’m going to send it to you, who knows.’ I don’t think he had any aspiration of making it until COVID hit. So I read it and really enjoyed it, and thought there was so much meat on the bone,” the actor noted. “It almost reads like a play at times, and is something an actor would love to sink their teeth into. I then met Steve and Amber and went up to the mountains.”

Like Pink and Gray mentioned, ‘The Wheel’ was shot on location in the forest, and is set in the remote, mountain-set Airbnb cabin getaway where Walker and Albee go in order to work on their marriage. The filmmakers delved into what the process was like of shooting the feature on location in the mountain resort.

“Well, I don’t think we could have survived if Taylor not brought in preparations for an epic water balloon fight,” the helmer jokingly mentioned. “We knew going up there that this small group of us were going to be in a bubble, like we were going to be in a small summer camp. There was some trepidation and nerves about COVID, but we all had to be tested and social distanced, even though we were up in the woods. Taylor brought…”

“1,500 water balloons,” the performer interjected with a laugh.

“So two weeks in, while we were in the middle of this really intimate and intense experience, since we were all stuck together and couldn’t leave, spent the whole weekend filling the balloons,” Pink continued.

“Myself and Sean Crampton, who was another producer on the film, filled up the water balloons for about half a day. But it was so worth it,” Gray noted.

“Being on the location in general was a really cool experience. If the world didn’t transform the way that it did, I don’t know if we could have ever had that experience,” the director admitted. “So we were grateful to have this experience, even though things were so difficult.

“It was a different experience. I’ve never miced myself before, as in putting the mic on myself,” the actor then revealed. “There were certain things that we had to do differently because of COVID, and that was one of them. I was like, okay, I can do this again in the future.”

Pink then delved into how he approached casting the rest of the actors who appear in ‘The Wheel,’ particularly with Midthunder, Bethany Anne Lind and Nelson Lee. “I believe Amber came on board through Trent, the writer, and Taylor through Josh. Then after they were cast, we found Bethany and Nelson,” the helmer revealed.

“Since it was COVID, there wasn’t a traditional casting process. We did a bunch of self tapes, but we didn’t want to really approach it that way,” Pink also divulged. “So we watched a bunch of movies and looked at a bunch of actors we liked.

“Josh had also started relationships with a bunch of managers and agents, so when an actor came through, we evaluated without really auditioning them at all,” the director added. “I just had a single Zoom conversation with both Bethany and Nelson, and then we offered them the roles. I was like, we’ll be able to just tell by their nature if they’re right for the roles.

“It was also about me persuading them to go up to the woods with me, a perfect stranger, and trust me to be in the COVID bubble with us for a month and make something that they’ll love. So it was partially pitching actors as much them auditioning, frankly,” Pink added. “Bethany and Nelson loved the script, as it’s a beautiful piece of material, and that’s how they became involved in the film.”

The duo then delved into what the experience was like of working together and with the rest of the actors once they were cast to build the characters’ backstories and relationships. “There were a lot of conversations. We did another new thing; I’ve never rehearsals from 15 feet away with a mask on,” Gray revealed.

“To be honest, I felt very confident the entire time we were up there. I’ve never told Steve this, but after the first rehearsal, I thought, this could go poorly,” the performer also admitted.

“We were yelling our lines to each other, but it was hard to hear each other and connect. The core of acting empathy and connecting with whoever else is with you. I didn’t know if I was ever going to be able to connect with them because I could hardly see them, let alone hear them, across the room,” Gray divulged.

“But I think our conversations were really important for building the relationships. That’s something I really commend Steve for; anytime we were feeling that things could go this way or that way, we would talk about it, rather than him saying ‘Put it up on irs feet and we’ll see if it works out,'” the actor also revealed.

“So we really had an understanding of what we wanted from each scene. As an actor, I think that’s such a blessing,” Gray fur added.

“Yes, there were moments where we were sitting 20 feet apart with masks on in a parking lot in the woods on folding chairs and rehearsing. I walked away feeling the same thing-terrified,” Pink admitted.

“We realized we had to find a way that feels organic when we get to set so that the actors could work. It wasn’t so difficult; it was a joy to find the space to do so, and explore any particular scene they wanted. I think that really brought them together as actors, especially Amber and Taylor,” the helmer concluded. 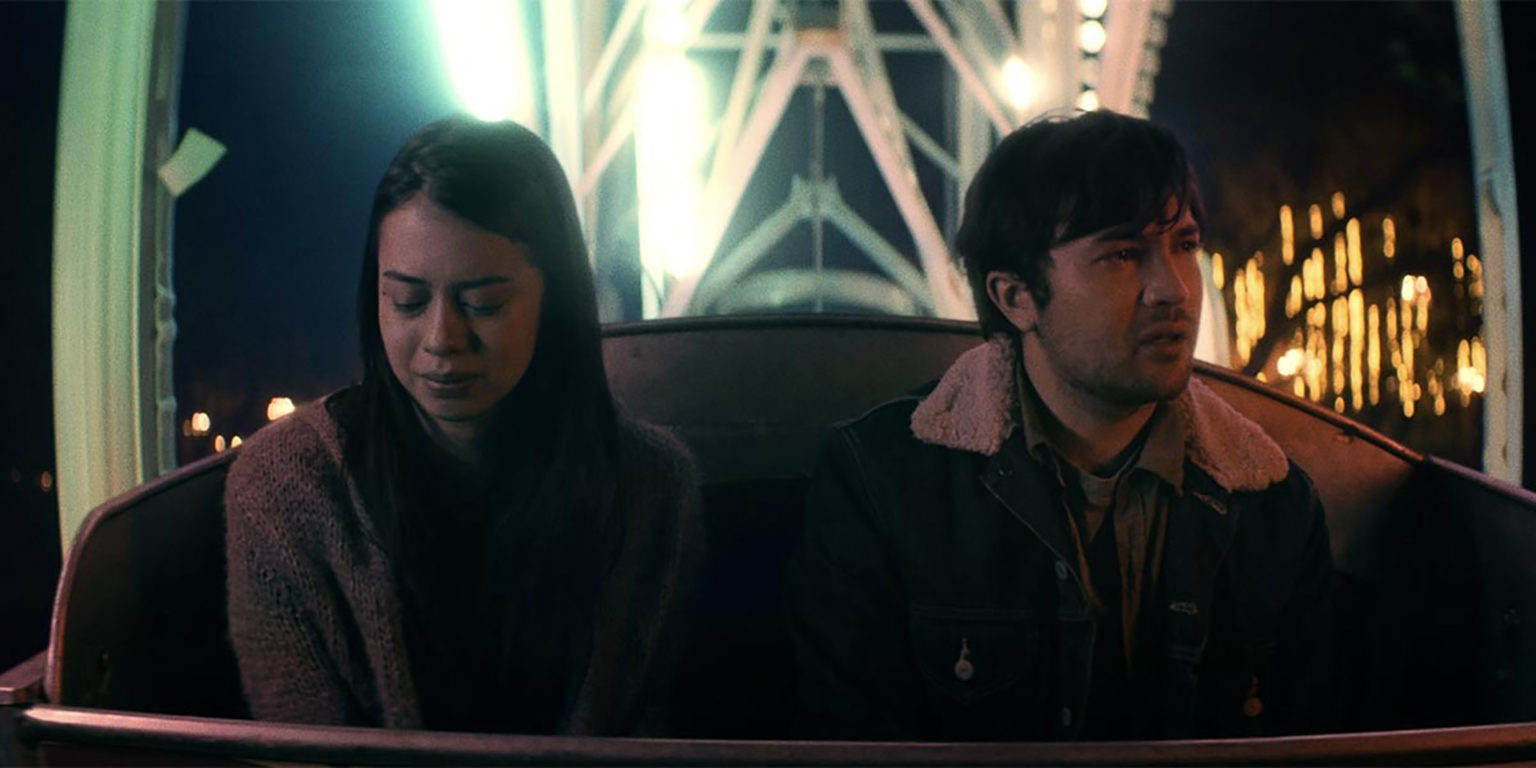