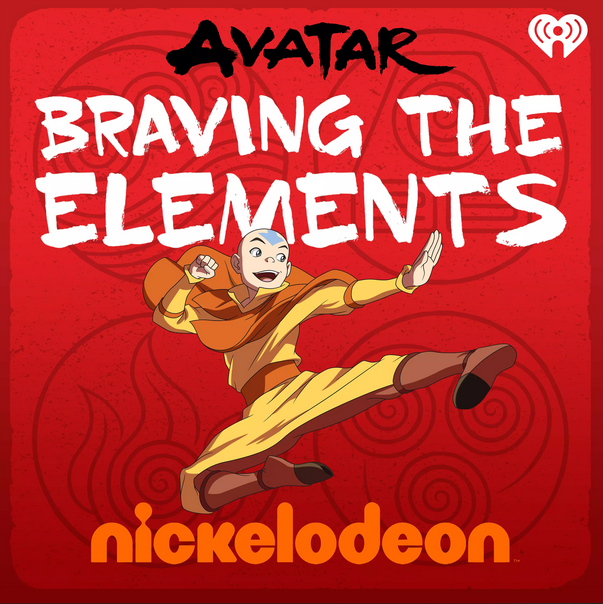 Despite people’s purest intentions, sometimes maintaining harmony in the world requires them to manipulate the elements and environment around them. That’s certainly true for the characters in Nickelodeon’s hit anime-influenced animated television series, ‘Avatar: The Last Airbender.’

While the action-adventure show concluded its three-season run over 13 years ago, in July 2008, two of the project’s stars – Janet Varney (the voice of Korra) and Dante Basco (the voice of Prince Zuko) – are currently hosting the first season of its official companion podcast, ‘Avatar: Braving the Elements.’ The podcast was created in part after the fantasy television series receiving a resurgence in popularity recently during the COVID pandemic, following its release on Netflix.

‘Avatar: Braving the Elements’ features Varney and Basco as they welcome special guests to explore every element of the Avatarverse, including the origins of the story and how the animated television series was brought to life. The podcast is targeted to both loyal fans who grew up on the beloved franchise and those people who are discovering the coming-of-age show for the first time.

Varney and Basco generously took the time this weekend to talk about hosting ‘Avatar: Braving the Elements’ during New York Comic Con 2021. Among other things, the hosts discussed that they were both interested in hosting ‘Avatar: Braving the Elements’ because they not only love listening to podcasts, but they also wanted to revisit a television series they still fondly cherish, even over a decade after its conclusion. They also expressed their appreciation over being able to speak and connect with the still largely devoted and loyal fanbase of the Avatarverse at the first in-person New York Comic Con since the start of the COVID-19 pandemic.

ShockYa (SY): Together, you co-host the ‘Avatar: Braving the Elements’ podcast, which extends the world of the beloved animated action-adventure show, ‘Avatar: The Last Airbender.’ Why were you both interested in co-hosting the podcast, and how did you become involved?

Dante Basco (DB): I personally got involved because Janet called me up and asked, “Do you want to do a podcast?” I was like, “I love podcasts! What are we going to do it about?” (Basco and Varney laugh.)

Janet Varney (JV): It’s true! I’ve been doing podcasts for a long time. One of my podcasts, the JV Club, has been going on for almost 10 years.

JV: But even back then, I was like, “I don’t know, it seems like a lot of people have podcasts! Maybe I shouldn’t do it.” That was adorable to look back on, but I really felt like that.

But I’m such a huge podcast fan, and Dante is, too, even before he started podcasting.

If you’re a person who’s into podcasting, you know what an intimate – and transportable – experience it is. You can be anywhere and still have people say, “You get me through my morning commute.” You then start to get greedy for that feeling. It’s very personal, and you build these relationships with your listeners.

The fact that there wasn’t an ‘Avatar’ podcast yet made the timing work out really well. The fine folks at Nickelodeon were interested in doing that, so I started trying to figure out, can we do it? It then came together really beautifully.

It was a great thing to be working on when life was a bit crazy. We got to revisit a show that we love, and we learned a lot more about it (through the podcast). It was a positive project to work on during the pandemic.

DB: For someone who’s been in the whole entertainment industry for most of my life, this is a new form of media for me.

DB: I love it, but I also saw how much harder it is (to record) than listen to! (Varney laughs.) It’s like producing everything else. I’m such a big fan of podcasts that I thought, I’m just going to talk, but no – there are some other things involved!

JV: We do our homework! (Varney laughs.)

SY: Speaking of doing your homework, for ‘Avatar: Braving the Elements,’ you’re re-watching every episode of the television series, so that you could break down key themes, notable battles and behind-the-scenes trivia on the podcast. What’s the experience like of revisiting the show during your preparation for the podcast, in order to help you decide what you’ll talk about during each episode?

DB: It’s been great. We get to rewatch the episodes again. I never really watched the episodes in order as we were filming the show.

As an actor, the experience of doing any project is actually doing the project. That holds a very special memory in your mind of the people you worked with, as well as the story, of course. But the story is intertwined with what’s going on in your own life at the time.

So to go back now, in a new place in my life, and rewatch it is so fascinating. There are moments where I don’t even remember saying certain words.

I also feel like I’m a little bit back in school, and we’re taking tests every week. Janet’s the smart kid in the class, and I’m the kid in the back who’s barely scrapping by.

JV: Yeah, but he always drops something on me from his perspective. That’s one of the things we found out quickly after we started recording, and we didn’t know it was going to happen beforehand.

We represent all the different types of people who know each other and don’t know each other, and all get something different from the show because it’s so layered. I might come into the show focusing on this one thing that I noticed about this one theme. I’m so fixated on that because it comes from something I experienced in life that Dante will be like, “I was actually paying attention to this thing.” Then I’ll be like, “I totally missed that.”

So again, we represent people everywhere who have those experiences. Then you understand why there are so many fan communities and panels of just fans talking about stuff at Comic Cons. Everyone pulls something different things from their own lives, and that builds out the Avatarverse into the meta Avatarverse, beyond (creators) Mike (Dante DiMartino) and Bryan (Konietzko) and all the people who are a part of the show. So the world becomes even larger because people are putting their own emotions and experiences into talking about the show.

SY: Also speaking about bringing ‘Avatar: Braving the Elements’ at Comic Cons, what’s the experience been like to share the podcast with fans of the franchise here at New York Comic Con?

DB: It’s so great. We’re artists and work on a lot of stuff, but every artist wants to do a character that people care about. So to not only be able to do that, but also being able to engage (with fans), and be at cons, is amazing. It’s great to be around people again and talk about things they – and we – are passionate about. We get to take a lot of these conversations and put them into the podcast, which is also great.

It’s also been great because they’ve also called us ambassadors for the show because we do cons together.

SY: How did you decide who you’ll feature as guests on ‘Avatar: Braving the Elements,’ and what you’ll discuss with them during the episodes?

DB: That’s the greatest thing. When you do a show, it’s a unique experience to get to reunite and work with the family again, including the actors, writers and even the animators who we don’t necessarily get to see all of the time, as well as Mike and Bryan and the producers.

So when we work on the podcast, it’s like we’re reuniting with our family members and talking about this great thing we did while recording the television show. We get this great joy out of it again, over a decade later, which is a pretty neat experience.