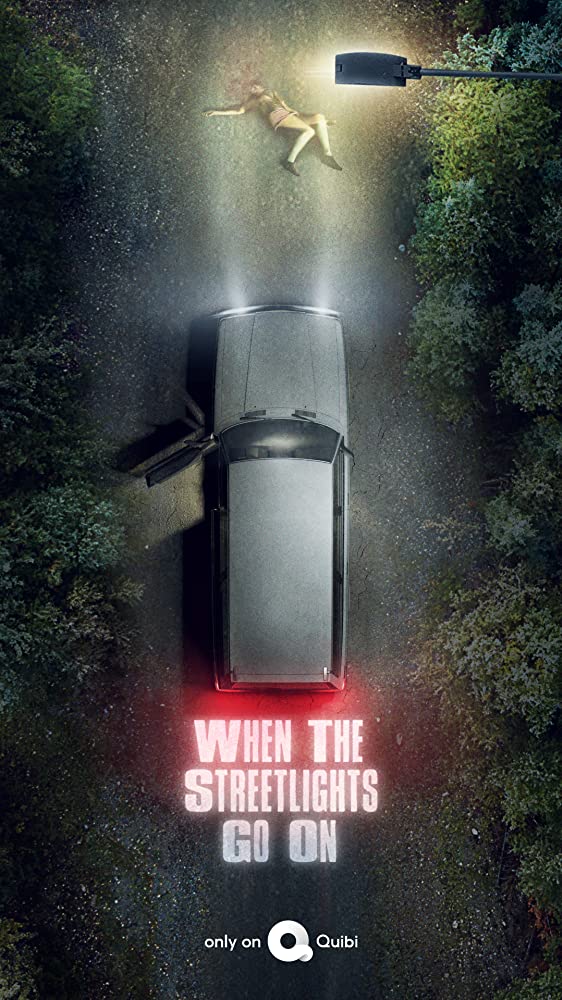 The poster for Quibi’s crime drama series, ‘When the Street Lights Go On,’ which was directed and executive produced by Rebecca Thomas, and stars Sophie Thatcher.

Finding a sense of normalcy and place to fit in with their peers and family can be a challenge for any teenager who’s trying to navigate high school. But coming of age during the midst of the murder investigation of a classmate who’s also their sister is even more devastating for an adolescent. That’s certainly the case for up-and-coming actress Sophie Thatcher’s character of Becky Monroe in Quibi‘s latest crime drama television series, ‘When the Streetlights Go On.’

The Paramount TV and Anonymous Content production, which features 10 episodes that have runtimes of just under 10 minutes, is now airing on the short-form streaming platform. The drama was written by Chris Hutton and Eddie O’Keefe, and directed and executive produced by Rebecca Thomas.

‘When the Streetlights Go On,’ which is set in the summer of 1995 in a small suburban town in Illinois, follows the aftermath of the deaths of popular high school student, Chrissy Monroe (Kristine Froseth), and her English teacher, Mr. Carpenter (Mark Duplass). The duo, who are having a secret affair, are abducted by a masked gunman, driven out into the woods and murdered after they meet one night after school.

Chrissy and Mr. Carpenter’s bodies are discovered by one of her classmates and next door neighbor, Charlie (Chosen Jacobs), who narrates the series in the present day as an adult (voiced by Nnamdi Asomugha). Charlie, who found the crime scene while he was riding home through the woods on his bike, reports the news of the case for the school’s newspaper. His uncovering of the bodies sets off an escalating series of events that upset the town, and will ultimately put a few more of his classmates in danger. While Chrissy’s sister, Becky, is completely different from her in many aspects of life, the surviving Monroe sibling helps Charlie and the chief investigator in the case, Detective Grasso (Queen Latifah), search for the person who’s responsible for the grizzly crime.

Thatcher generously took the time early last week to talk about starring in ‘When the Streetlights Go On’ during an exclusive interview over the phone. Among other things, the actress discussed that she was drawn to star on the show because she not only likes Thomas’ overall tone as a storyteller, but she also felt as though she could easily relate to Becky’s struggles and step into her world. The performer also noted that she appreciates Quibi’s unique new format in storytelling, because it adds to the crime drama’s mystery, and allows viewers to watch the plot unfold at their own pace.

Our exclusive interview took place the day after Thatcher, Thomas and Jacobs participated in Quibi’s virtual panel during this month’s New York Comic Con (NYCC), which was moderated by host-entertainment journalist-film critic, Grae Drake. The panel, which also featured interviews with the cast and crew of two of the streaming platform’s other series, ‘The Expecting‘ and ‘50 States of Fright.’ ‘When the Streetlights Go On’s portion of the panel, which runs from the 14:43 mark to the 30:12 mark in the video, is featured on NYCC‘s YouTube page, and is also embedded above. Read our exclusive interview with Thatcher below.

ShockYa (SY): You play Becky Monroe on the new short crime drama television show, ‘When the Streetlights Go On.’ What was it about the character of Becky, as well as the overall project, that convinced you to take on the role? How did you become involved on the series?

Sophie Thatcher (ST): I heard of Rebecca Thomas through her first feature film, (the 2012 drama,) ‘Electrick Children.’ I watched it a couple of years before (production on ‘When the Streetlights Go On’ began), and I really liked it. It’s a story that I can relate to, because (the movie’s) about growing up Mormon, and both Rebecca and I grew up Mormon.

Since I knew about the film, my agent sent me the script for the show. I thought it was awesome, because Rebecca’s this cool, young female director, and she also worked on ‘Stranger Things.’ I like the tone of her work, so I auditioned for (the show) and met with her. We really clicked, and it felt natural. I was then cast, and went to Vancouver for the first time.

In terms of the character, I was very similar to (Becky) when I was in high school. Overall, it wasn’t easy to step into her world, but it became easier for me because I lived through it, to some degree. (In real life), I was a little bit more reserved and introverted in high school, and it was an awkward age. I was 18 when I shot (the series), so I was (experiencing some of the same things as Becky) just a couple of years before. So those feelings were still in me.

SY: The drama is set in the aftermath of Becky’s sister’s Chrissy’s death, which leaves the surviving sibling struggling to find a sense of normalcy in the midst of the murder investigation. What was the process of connecting with Becky’s mindset as she struggles to come to terms with Chrissy’s murder?

ST: While I was preparing, I was drawing references to such films as ‘The Virgin Suicides’ and ‘The Place Beyond the Pines,’ which I actually watched during the middle of shooting. Sam (Strike), my co-star, recommended it, and said it felt tonally similar (to the series), which helped me in my preparation.

SY: Rebecca Thomas directed ‘When the Streetlights Go On,’ like you mentioned earlier. What was the experience of collaborating with her while you were filming the show?

ST: The experience was amazing. I think she’s one of the most talented people out there, as she’s creative and giving, and makes everyone feel so confident. I think that’s such an important quality in a director, because it makes everyone feel so confident on set. There was such a positive energy on set, and directors really set that energy. I think seeing her movie (‘Electrick Children’), and also having the bond of growing up Mormon, made me feel comfortable with Rebecca.

I feel very fortunate to have worked with female directors, so I wish there were more of them; it’s such a different energy when you’re working on set with them, from what I’ve experienced. I wish that I can have that energy every time (I film a project)! (Thatcher laughs.) If I had the choice, I would just work with female directors.

Having more women on the cast and crew is so important, but I’ve had great experiences working with both genders. I think I personally work better with feminine energy, but anyone can have that energy, and I need that on set.

SY: The series also stars Sam Strike, who you mentioned earlier, as well as Chosen Jacobs. What was the process of working with them to build your characters’ backstories, motivations and relationships?

ST: Sam and I got along really well from the first day. I was really nervous because I hadn’t been on a set for at least a couple months, and in general, the first day on set is always nerve-racking. But we hit it off right away. We had a lot in common, in terms of movie. He’s a really cool, down-to-Earth person.

Chosen is just an angel. (Thatcher laughs.) He was also a beam of light and positivity. Having that on set, especially when you’re working on a dark script like this one, was nice. It helped to just snap out of (the story) with him, as he would bring me back to Earth. While I feel like I could just live in that world, it was nice to have Sam and Chosen help me snap out of that, and realize that it’s just a project, and you can’t let it affect you too deeply. (Thatcher laughs.)

SY: ‘When the Streetlights Go On ‘ was shot in Vancouver, like you mentioned earlier. What was the process like of shooting on location in Canada?

ST: I loved Vancouver; I had never been (there before, and in general,) it was my first time in Canada. The food there’s amazing! (Traveling’s) one of my favorite parts of the job, as I like to go to new places. There’s something about being in a hotel, and living out of a suitcase, that I love. I’m the kind of person who wants to be everywhere at once, as I can’t stay in one place for too long, so this job is perfect for me.

SY: This first season of ‘When the Streetlights Go On’ debuted this past spring on Quibi. What was the experience like of shooting the episodes for, and working with, the streaming service?

ST: I didn’t fully understand the concept of Quibi before (production began), so I read the script like it was an indie film. It was still like that while we were filming the show, but (the story) is divided into episodes. I didn’t pay attention to that (during filming), but if I did, I think it would have thrown me off. But while I was watching the show when it first came out a few months ago, it made total sense, and I think (the structure) helped the story.

I think a lot of people felt that way, as (filming the show) naturally felt like (making) an indie film. It was a really interesting experience to watch everything tie together, and realize that this format is really beneficial for the project, as it adds the mystery theme.

There are cliffhangers every 10 minutes, so it gives you time to process it before you move on to the next episode, and move on with your life, as there’s a lot going on. It’s like a heavily packed movie, but there are some breaks. So you can watch one episode, which is less than 10 minutes, while you’re doing something else. I think it’s nice to be able to have that time in between each episode.

SY: The drama participated in Quibi’s Quick Bites of Fright panel at (last) weekend’s NYCC. What was the experience like of participating in the panel?

ST: It’s been very strange to promote the show during the pandemic. (Thatcher laughs.) I think it’s very important to have new content right now, and distract yourself in any way possible, especially when you’re not working. So having these interviews has given me some kind of order in my schedule, which is nice.

There’s something comforting and relaxing about doing interviews at home, but it’s so much nicer to see people in person, and talk to them face-to-face. It’s strange to be only doing press over the phone, as it’s new for everyone, but I’m not opposed to it, as I can stay in my pajamas! (Thatcher laughs.)

Watch the official trailer for ‘When the Streetlights Go On’ below: