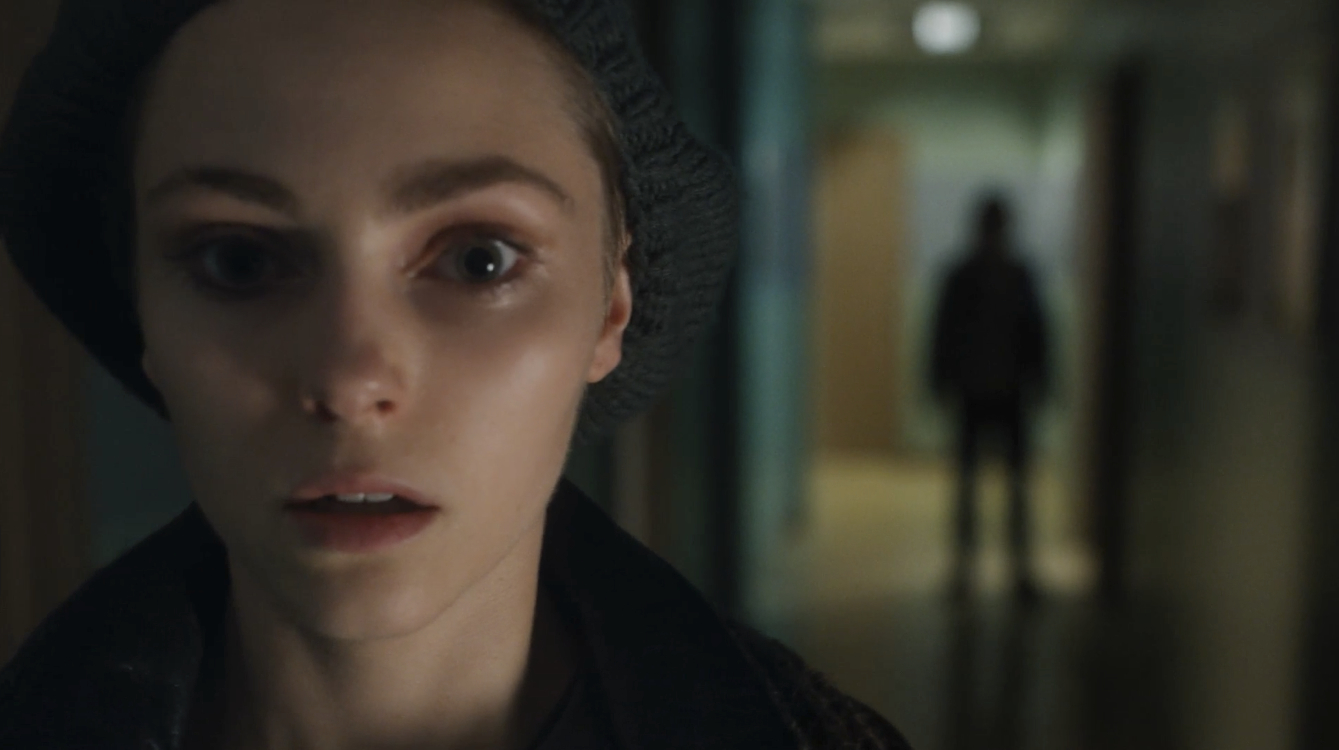 People can often experience a sense of loneliness when they have something going on in their body that no one else around them can truly understand. Telling a story that captures that feeling can be a powerful journey for both the narrator and audience, which is certainly the case for Quibi‘s new body horror television show, ‘The Expecting.’ The series’ acute attention to drama and character, as well as its strong focus on human nature and humanity, will surely allow viewers to relate to the struggles that its protagonist, Emma, who’s played by AnnaSophia Robb, is experiencing when she discovers that she’s pregnant.

The Platinum Dunes and Dark Castle production features 11 episodes, with one new chapter premiering every day on the streaming service until this Thursday, October 15. The drama was created and written by Ben Ketai, and directed and co-executive produced by ‘American Psycho’ helmer, Mary Harron.

‘The Expecting’ follows the unearthly pregnancy of Emma, a waitress who desires to free herself from her troubled past and disappointing present. While she receives offers of help from her co-worker and friend, Tyler (Rory Culkin), who she believes to be her child’s father, as well as her new gynecologist, Dr. Green (Mira Sorvino), Emma is initially unsure about whether or not she should keep the baby. Her concerns about the pregnancy increase when she starts becoming plagued by nightmares and disturbing physical complications, which leads her to embark on an unexpected journey to uncover the truth about her baby’s conception.

Robb generously took the time recently to talk about starring on ‘The Expecting’ during an exclusive interview over the phone. Among other things, the actress discussed that she was immediately compelled to portray the at-times troubled protagonist in the thriller, as not only are there are so many unpredictable elements in the story, but she was also interested in working with Harron. In addition to her character’s emotional arc, she also appreciated having the opportunity to showcase how Emma is physically battling the symptoms she’s experiencing during her pregnancy.

The conversation with Robb began with the performer discussing what drew her to play Emma on ‘The Expecting,’ and how she become involved in the show. “When I read the script for the first time, I flew through it, because I had to find out what happened next. I was trying to figure out where it was going, as there are so many different twists. I think part of the fun of reading a Quibi script is that often times, they’re written like a feature, but they’ve broken it up” into multiple episodes that are less than 10 minutes long, she noted. “So the (episodes) move very quickly, and you become addicted to wanting to know what’s next.

“When I read the script, I also thought it was really interesting because it explores a subject that I had never really seen on screen, other than in ‘Rosemary’s Baby.’ It talks about pregnancy in a body horror way,” Robb explained. “There’s something inside of you that’s sucking all your nutrients, and is making you go crazy. There are all of these different, horrifying physical things that are happening, and I think that’s an exciting new way to look at pregnancy.

“Then I auditioned for Mary Harron, whose work I’ve always been a big fan of,” the performer revealed. She then admitted with a laugh, “I was very surprised when I got the role, because I didn’t think I was right for it! But I was very thankful that they hired me, because I had a great time.”

Further speaking of collaborating with the series’ helmer, Robb discussed what their collaboration was like while they were shooting ‘The Expecting.’ “We spent a lot of time going through the script before filming began. She’d come over to my apartment, and I’d go over to hers, and we’d go page-by-page, scene-by-scene, tracking Emma’s arc,” the actress divulged.

“We discussed if we had any adjustments for the plot. The story has a lot of twists and turns, so Mary and I wanted to make sure we were on the same page before we started filming,” Robb continued. “We shot (the show) like an indie movie-fast and furious. So we wanted to make sure our communication, in terms of where Emma was going, was lined up.”

Emma suffers disturbing effects from her pregnancy, which leads her to embarks on a dark journey to uncover the potential conspiracy surrounding them. The protagonist also tries to portray to everyone in her life that she’s strong, but she’s internally struggling to survive, and is vulnerable. So the performer did some of her own research, in addition to reading ‘The Expecting’s script, in order to connecting with her character’s mindset, as she struggles to come to terms with, and understand, her pregnancy.

“I did a lot of research; I watched a lot of movies, including Winona Ryder films and ‘Rosemary’s Baby,’ as well as films that we referenced stylistically. I also watched the (British documentary) show, ‘One Born Every Minute,’ which is on Amazon. Every episode features three different women giving birth. I wanted to see what that would look like, and see that experience in a way that was as real as possible; I wanted it to be as up close and personal as possible,” Robb admitted with a laugh.

With Emma continuously battling the strange symptoms of her pregnancy, the actress also enjoyed the process of working on her physicality for the role, to showcase how she’s physically battling her symptoms. “I had to wear a pregnancy suit throughout the majority of the shoot, to show the different stages of my character’s pregnancy. That really did change my physicality, and how I moved,” she shared.

“The first couple of times I put it on, I was so uncomfortable, and I wanted to take it off all the time. But by the end, it really felt like it was a part of me. I really couldn’t bend over, though,” Robb continued. “There were four different size bellies, and which size I wore depended on which stage in the pregnancy that Emma was in.

“Having it on changed the way that I moved, and I felt like something was a part of me that actually wasn’t a part of me. So that was a helpful physical tool, and was a good reminder that Emma was pregnant,” the performer added with a hint of a laugh.

Besides Robb, the thriller features a strong supporting cast. The show’s lead actress then delved into what the process of working with her co-stars was like, and how they worked together to build their characters’ relationships.

“Rory is awesome, and such a lovely person. He’s also a really talented, thoughtful actor,” Robb gushed about Culkin. “We’re sort of neighbors, so he came over to my apartment before we started filming with Mary, and we went over our scenes, as well as questions and thoughts we had. We spent time together off set, as well. There wasn’t too much to do where we staying, in this tiny suburb of Boston. But we saw a movie with, and got to know, each other, as friends do.

“In terms of working together on our scenes, we just ran lines,” the performer added. “Mary let us be pretty flexible with our lines. But we actually didn’t have a ton of dialogue; it was more of us watching and reacting. But none of the words felt precious, so if anything felt wrong, we changed it.

“But we obviously had to honor, and stick to, the script,” Robb noted. “In horror, structure is one of the most important things, as you have to build the tension. Whatever you’re revealing is important information because it’s a plot point. So we had to stick to the structure of the story, so that everything would be revealed. But in terms of ad-libbing, Mary was pretty flexible with that.”

Like the actress previously mentioned, ‘The Expecting’ was shot in a small Massachusetts suburb, and the story is set in a lower-class town. As an actress, Robb cherishes having the opportunity to sometimes work in real locations while she’s filming a television show or movie.

“I miss filming on location. I’m curious how, in light of COVID, projects are going to continue shooting on location. I know productions are doing a lot of different things, in terms of safety,” the performer pointed out. “Right now, it’s better to be on a soundstage, because it’s a more controlled environment.

“In terms of being on, and getting into character, in a real location, it’s pretty special. We had about a week-and-a-half period in which we filmed outside in the woods, and that was slightly miserable,” Robb revealed with a laugh. “It was cold and wet, and we shot at night. So there was an element in which we weren’t pretending, because we really were cold, wet and miserable.”

The experience of shooting the current first season of ‘The Expecting’ for Quibi, and having each episode be under 10 minutes long, was also one that the actress enjoyed. “Like I mentioned earlier, the script reads at a quick pace, because there are these 10-page arcs for each episode. But that also means that each scene is shorter, because we have more story to tell in a shorter period of time,” she noted.

“The frustration of having those shorter scenes, though, is that it’s harder to get the story told, while also having an emotional arc. But we were able to do both, and I think our show does that pretty well. It tells a lot of the story in a short amount of time, while also giving breathing room to the scenes and characters, and have character growth, both physically and emotionally,” Robb added.

“I think Quibi’s such a cool platform because they’re open to really cool creative ideas. If you look at their lineup, they have so many different genres…They’re really open-minded about the type of content they want to put out, which I think is cool,” the performer shared.

“It’s also not a large commitment for viewers to watch Quibi’s shows, because all the episodes are 10 minutes or less. Since there’s so much stuff to watch now, it’s nice to have those 10-minute episodes; viewers can watch one 10-minute episode every day!,” Robb concluded.