One of the most polarizing zombie franchises of the past two-and-a-half decades, ‘Resident Evil,’ is powerfully being revived in the current pandemic era of the real world. The new action thriller, ‘Resident Evil: Welcome to Raccoon City,’ is stunningly succeeding in rebooting the at-times divisive live-action horror film series, which originally ran from 2002-2016.

The movie franchise’s seventh installment retools some of the characters and plot points from writer-director-producer Paul W. S. Anderson’s initial six entries in the series. The drama is also inspired by the characters and stories from the first two ‘Resident Evil’ video games by Capcom.

Anderson’s fellow genre filmmaker, Johannes Roberts, who garnered recognition in part for scribing and helming the ’47 Meters Down’ series, stepped in to take on the writing and directorial duties for the latest ‘Resident Evil’ movie. Under Roberts’ guidance, the thriller, which Sony Pictures is set to release in theaters tomorrow, is adding more substance, both emotionally and visually, to the franchise, whose government-driven societal disaster theme is more timely and relatable than ever.

‘Resident Evil: Welcome to Raccoon City’ chronicles the initial destruction of the titular city one night in 1998, after the Umbrella Corporation realizes what negative effects its experiments are having on the surrounding population and land. The movie opens with a flashback to the life-changing youthful experience that separated siblings Claire and Redfield while they lived at the local orphanage run by the pharmaceutical company years earlier. Years later, the former is finally returns to her hometown as an adult.

Claire (Kaya Scodelario) and Chris (Robbie Amell) are still at odds with each other after their five-year estrangement, as she ran away from the orphanage and is currently investigating the Umbrella Corporation. Meanwhile, he’s a member of STARS (Special Tactics And Rescue Service), and views scientist William Birkin (Neal McDonough), the doctor who treated the duo at the orphanage, as a surrogate father after the siblings’ parents died. Claire, who’s still traumatized by her experience with William at the orphanage, tries to convince her older brother that they need to immediately leave the city, much to his uncertainty.

The duo is put into further danger when they’re separated following the Umbrella Corporation’s shut-down of Racoon City before its planned demolition. Chris goes to work at the police-force building, where he’s met by his colleagues, including tough Jill Valentine (Hannah John-Kamen), arrogant Albert Wesker (Tom Hopper) and Richard Aiken (Chad Rook), who travel to the local Spencer Mansion to look for their missing Bravo team colleagues.

As the police team investigate the house, Claire partners with rookie cop Leon S. Kennedy (Avan Jogia) and Chief Brian Irons (Donal Logue). Despite their at-times painful experiences with the eponymous city, no one anticipates the horrors that await them as the townspeople slowly turn into disease-spreading cannibals, or the fight they have to endure in order to survive the night.

Roberts generously took the time recently to talk about writing and directing ‘Resident Evil: Welcome to Raccoon City” during an exclusive video interview over Zoom. Among other things, the filmmaker discussed why he was interested in joining, and how he became attached to scribe and helm the latest installment in, the franchise; his process of creating the story for the new reboot; and how he approached directing the movie series’ seventh entry, including deciding who he would cast in the drama, how he worked with the actors on creating their stunts and the process of filming the feature on location in Ontario, Canada during the COVID-19 pandemic.

Watch our exclusive video interview with Roberts above, and the official trailer for ‘Resident Evil: Welcome to Raccoon City’ below. 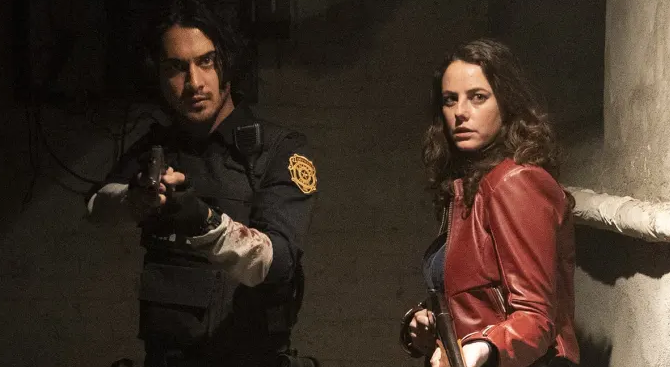